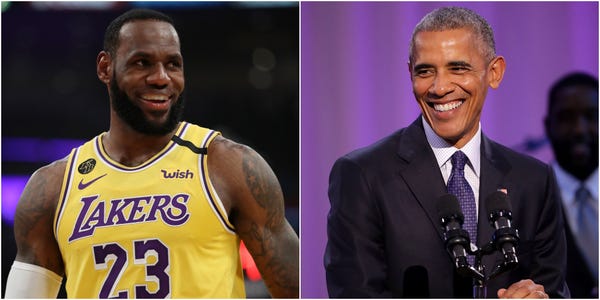 LeBron James told Barack Obama his mother likely voted for the first time ever this year, and the former US president said he loved and respected her for it.

"My mom sent me a video today of her voting," James told Obama of 52-year-old Gloria James in a video he shared to Twitter on Wednesday.

Obama responded by saying: "You tell her I'm proud of her! You tell her Barack and Michelle give her much love and respect for that."

"Thank you, I will for sure," said James. "She sent me a video of her leaving after she voted, she had her sticker on her chest. She was so, so damn proud of herself and I was so proud of her too, it's just a beautiful thing."

The video of James and Obama chatting was a clip from the latest episode of James' HBO show "The Shop: Uninterrupted," which is set to air Friday, and is part of the pair's effort to boost turnout among Black voters at next Tuesday's presidential election.

The special edition show will see the pair — alongside James' business partner Maverick Carter — discuss everything from the NBA bubble, to the Black Lives Matter movement, and the presidential election.

James didn't give any indication of which way his mother voted, but the Lakers star has previously backed Democratic candidate Joe Biden, and clashed with President Donald Trump numerous times.