Labor has questioned the motive of Northern Australia Minister Keith Pitt for blocking a government loan to a wind farm in Far North Queensland.

The board of the $5 billion Northern Australia Infrastructure Facility (NAIF), which was set up to support infrastructure investment, recommended a loan of up to $280 million for energy developer Neoen’s $380 million Kaban wind farm, located west of Cairns in the Atherton Tablelands. 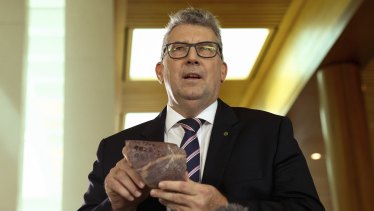 Mr Pitt wrote to NAIF chief executive Chris Wade on March 29 and told him to reject Neoen’s loan. He said the wind farm would not provide firm power to the energy grid and he was not convinced it would contribute to lower energy prices.

Wind farms provide intermittent power due to the variable nature of their energy source, but adding a battery increases reliability and helps supply lower-priced energy to the grid. The Kaban project website has statements dating to 2018 which detail plans for a battery.

NAIF chief executive Chris Wade was questioned in a Senate estimates hearing on Friday about advice provided to Mr Pitt and whether anyone from the agency told the Minister or his office the Kaban project included large-scale battery storage.

Mr Wade said the proposal submitted to the NAIF for financing did not include a battery component.

Labor Senator Murray Watt asked if the NAIF was aware Neoen had announced publicly the Kaban project incorporated battery storage, to be independently financed, and whether advice was provided to Mr Pitt that Neoen was planning to incorporate a large-scale battery.

Mr Wade did not answer the questions but will provide a written response later.

“Are we seriously saying a Minister can knock off a loan that will support a project, even when there is funding available for another part of it that makes it all hang together? Because that is what has happened here,” Senator Watt said. “Surely someone went back to him and said ‘you’ve got this wrong, this project includes a battery’.”

“He knocked it off because of his own prejudice against renewable energy.”

Under the NAIF Act, the agency must give the responsible minister written notice of the proposal, which is what the minister considers when determining whether to issue a rejection notice.

Mr Pitt said on Friday the proposal for the Kaban project provided to him by NAIF “did not include a battery component”.

The 157 megawatt Kaban wind farm is estimated to generate enough energy to power 96,000 homes and create 250 jobs during construction.

Queensland government announced on May 21 it would support the project with $40 million, which Premier Annastacia Palaszczuk said would be used to upgrade transmission lines to link Kaban to the grid and help the state reach its target for 50 per cent renewable energy by 2030.

France-based Neoen is one of the world’s biggest developers of renewable energy projects. The company operates the Tesla Big Battery in South Australia, which was the largest lithium-ion battery in the world when US tech billionaire Elon Musk built it in 2017. Neoen is now pursuing plans to develop a big battery in Victoria, which would be nearly three times the initial size of South Australia’s.