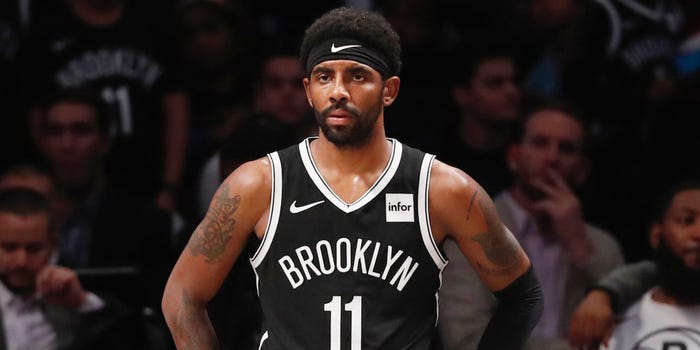 Kyrie Irving appears to be in a budding war with both the media and the NBA.

When NBA training camps opened last week, Irving did not speak with media. Instead, he released a statement saying he didn't intend to speak with reporters this season.

"My goal this season is to let my work on and off the court speak for itself," the statement read. "Life hit differently this year and it requires us, it requires me, to move differently. So, this is the beginning of that change."

Irving also said he was releasing the statement so his message was "properly conveyed."

This week, the NBA fined Irving and the Nets $25,000 each, as players are contractually obligated to speak with the media.

Irving responded to the fine on Instagram with a quote from Malcolm X. He then called media members "pawns," adding that he hopes money from the fines goes to charities.

According to The Athletic's Zach Harper, the NBA and NBPA donate money from fines to agreed-upon charities.

The Athletic's David Aldridge suggested Irving not accept any awards voted upon by the media this season.

"I think that calling anybody a pawn is a sure sign of disrespect, and I understand where Kyrie is coming from in trying to better a number of people's lives, but I'm just not a divisive person," Love told reporters.

Irving has a checkered history with the media. In 2019, he criticized speculation over a video that appeared to show him and Kevin Durant speaking about free agency at the All-Star Game. Irving said the speculation was done for "clicks" and suggested it was an invasion of his privacy.

In January, Irving also criticized the media reaction to comments he made in which he listed a handful of Nets players and said they need help. He told reporters, "You're not in our locker room — stay the f— out."