Some fans of King’s Hawaiian sweet rolls feel lied to, according to a new class-action lawsuit.

The law office of Sheehan & Associates PC in New York confirmed to Fox News it has filed a lawsuit against the 70-year-old bread company for allegedly misleading customers into believing its sweet rolls are still made in the Aloha State.

"This statement is important for U.S. consumers because they expect the absolute truth — which means no ambiguity," a representative from Sheehan & Associates PC wrote to Fox News via email. "While Hawaiian rolls and company name by themselves don’t cause people to expect a product made in Hawaii any more than a moon pie be made on the moon, the prominent placement of Hilo Hawaii gives a misleading impression to consumers."

"This is especially so since King’s Hawaiian is the preeminent brand in this category of food," the law office’s statement continued.

Representatives at King’s Hawaiian did not immediately respond to Fox News’ request for comment.

However, according to public records shared by the company, King’s Hawaiian has production facilities in Torrance, Calif., and Flowery Branch, Ga., in addition to select bakery locations.

The brand’s sweet rolls were originally made in Hilo, Hawaii, when it was founded in 1950 by Robert Taira, who was a Hawaiian-born son of Japanese immigrants. The town is still listed on the front side of the bread’s packaging under the brand’s name and established date. 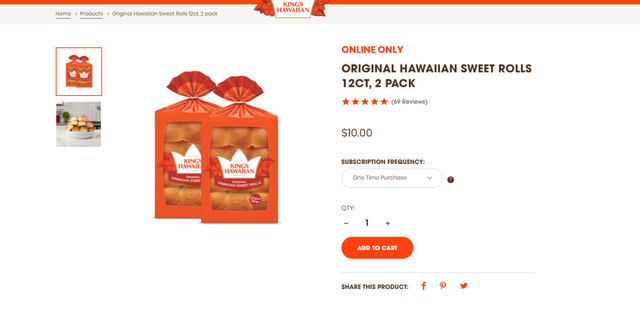 Plaintiffs from New York stated they believe this location listing is "deceptive" and makes consumers think they are getting a product that was made in Hawaii, according to court documents.

The lawsuit alleges the plaintiffs wouldn’t have paid for King’s Hawaiian sweet rolls if they had known they weren't made in Hawaii.  Unspecified damages are being sought along with a demand that King’s Hawaiian change the labeling on its packaging.