With fans returning to the arena for the first time since the start of the COVID-19 pandemic, those lucky enough to have a ticket were treated to a top-class weekend of pool at the Europa Sports Complex.

Fisher, who recently opened up to Sky Sports about her incredible journey to the top, was beaten 7-3 by Australian Justin Sajich in the preliminary round.

Oh, my word. Have you ever seen anything quite like it?! 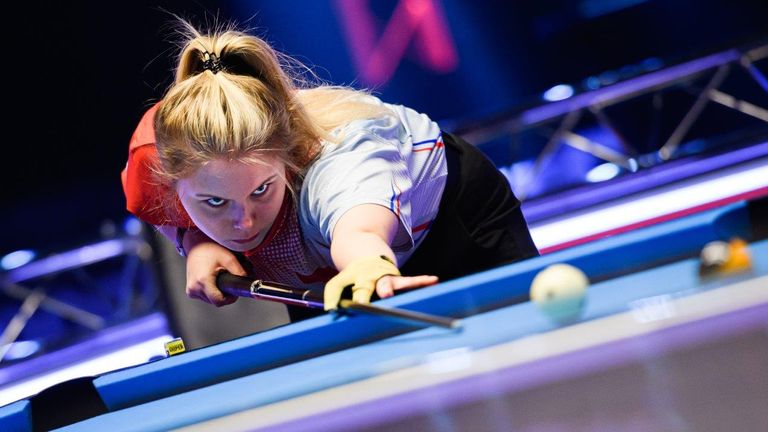 Russian youngster Kristina Tkach was beaten 7-2 by Mieszko Fortunski in another preliminary round match.

"I am just going out there taking it ball by ball. One match at a time." 🗣Skyler Woodward reacts to his victory over David Alcaide #WorldPoolMasters #VisitGibraltar pic.twitter.com/cxNDVZFYIk

Joshua Filler staved off a Chris Melling fightback to advance to the quarter-finals.

Filler held a 5-1 lead over Melling before the Yorkshireman fought back to 5-5, only to see the recent World Cup winner complete a 7-5 win. Woodward, who inflicted a 7-1 defeat on Mosconi Cup team-mate Billy Thorpe, continued his stunning form by knocking out defending champion Alcaide out of the tournament with a 7-3 last 16 win, while Eklent Kaci also made it through to the quarter-finals after an eventful 7-5 win over Naoyuki Oi.

For those on the move, we will have the Snooker & Pool season covered via our website skysports.com/more-sports, our app for mobile devices, or our Twitter account @skysportspool for latest news and reports.