Indigenous actor Shareena Clanton has accused long-running soap Neighbours of being a “culturally unsafe place” where the N-word and other racially charged terms were bandied around in the name of humour.

Ms Clanton, whose heritage includes Wongatha/Yamatji and Noongar/Gitja on her mother’s side and Etowah Cherokee, Blackfoot and African American on her father’s side, said that calling out the language and behaviour she encountered on the show “often left me ostracised and further marginalised”. 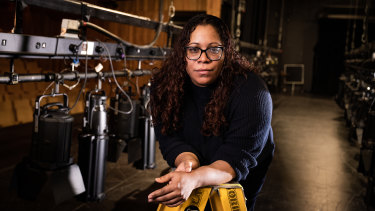 Shareena Clanton has said the set of Ten’s long-running soap is a ‘culturally unsafe’ place.Credit:Tony McDonough

In an Instagram post published on Tuesday morning, Ms Clanton said she was struggling to write anything positive about “the months I endured on Neighbours after multiple racist traumas” caused by working on “this highly problematic show”.

She added that it had been “lonely, triggering and traumatising to work in such a culturally unsafe space”. Ms Clanton played Sheila Canning in a six-week guest role.

Ms Clanton also said the N-word was used on two occasions, on-set and in the green room; a white actor openly laughed at the use of the N-word and that when questioned about the incident, told HR that Ms Clanton had “misconstrued” the situation, and that she had laughed at “something else”.

In a subsequent response to a comment, Ms Clanton added that she had contributed substantially to a “change the date” storyline for a recent episode of Ten’s weeknight drama, but had not received a writing credit.

She accused the show’s producers, Fremantle Australia, of “virtue signalling without action” and said “the entire production needs a complete shift in cultural education”.

Ms Clanton said she had taken her complaints to Fremantle’s management and HR department.

In response, she said, they have “done little”, though she did note that the “individual who said the N-word” had been stood down for a week to consider their behaviour, and had been ordered into four sessions of compulsory workplace training.

Ms Clanton said she was speaking out “so that my community and wider audiences are aware of how toxic that workplace is and has become”.

She added, ”I’ll never work for this show again”.

Fremantle responded to the claims with a statement that said Neighbours tried to be “a platform for diversity and inclusion” both on and off the screen.

“Shareena’s involvement in the creative process and on set was invaluable and hugely educational and will benefit the series moving forward,” the statement said.

“There have been significant and lengthy discussions with Shareena during her time on Neighbours and we will continue to work with all cast and crew to ensure Neighbours continues to be a fully inclusive environment.”