Former Liberal staffer Brittany Higgins has thanked a South Australian radio station for taking action after a local presenter labelled her a “silly girl” who “should have her bottom smacked”.

Jeremy Cordeaux, one of Adelaide’s longest-serving media personalities, was on Monday sacked by popular talkback station FiveAA. The veteran radio host made the comments over the weekend as part of his breakfast show. 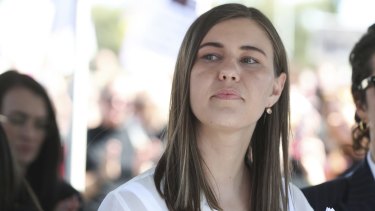 Brittany Higgins at the Women’s March 4 Justice at Parliament House in Canberra earlier this month.Credit:Alex Ellinghausen

“Now, why are we going through these machinations about this young woman?” Cordeaux said during his on-air tirade. “She should have her bottom smacked. Why in God’s name would she go out and get herself in that kind of compromising situation?

“I just ask myself why the Prime Minister doesn’t call it out for what it is – a silly little girl who got drunk. If this girl has been raped, why hasn’t the guy who raped her been arrested? Apparently everyone knows his name.”

Ms Higgins says she was raped in a senior government minister’s office in March last year. The allegations, which were made public in February, have led to intense scrutiny of the culture within Parliament House and the treatment of women more broadly.

Later in the day, Ms Higgins said she was grateful to the bosses at FiveAA and parent company Nova Entertainment for “standing up for the one in five Australian women who will experience sexual assault in their lifetime”.

“I politely disagree, Mr Cordeaux,” the former Liberal staffer wrote on social media. “I do not deserve to have my ‘bottom smacked’. This rhetoric isn’t helpful, especially given the cultural reckoning about consent that is taking place across the country.

“Instead of seeking to modify the behaviour of victims, let’s try to address how we can deter perpetrators of sexual crimes.”

Cordeaux, who helped anchor the Adelaide edition of Seven News in the 1980s, has since doubled-down on his comments, telling the Seven Network: “The advice I give to my own daughter [is], ‘Do not go out and get drunk. Regardless of how well you may know the people around, do not put yourself in harm’s way. Be on guard all the time, don’t be a silly little girl.’

“I think, in a way, the [Parliament House] security people were probably more to blame because they should have taken charge of the situation, realising that [Higgins] wasn’t herself.”

Cordeaux’s comments from the weekend were made while he was speaking with former News Corp entertainment writer Peter Ford. In a statement, Ford said the exchange was pre-recorded.

“I can’t comment at length as I have no idea what actually went to air after editing,” he said. “I know I had made reference to Ms Higgins being ‘admirable’ and Jeremy took issue with that. A conversation continued and comments were made that I didn’t and don’t subscribe to.

“Whilst I defend [Jeremy’s] right to ask questions and take a stand I did think the words used to do that were crude and disrespectful. Only Jeremy can explain or defend those words. When I’m a guest on a show it’s not my place to demand a host fall in line with my opinion and nor is it my responsibility today to be offering apologies for something another person said.”

Ford went on to say that he hopes Ms Higgins “gets justice and peace”.

“I will also miss working with this remarkable broadcaster who has been very supportive of me over many years.”

Cordeaux has been a key figure in Adelaide’s radio scene since the 1970s. The 75-year-old got his start at Sydney’s 2GB as a teenager running errands for radio veteran John Laws. The long-serving radio host was made a Member of the Order of Australia in 2006 and has been with FiveAA since 2014.

Earlier this month, former defence minister Linda Reynolds unreservedly apologised to Ms Higgins after calling her a “lying cow”. The Senator maintains she did not make the comment about Ms Higgins’ rape allegation but rather news reports about her handling of it.