Morgan Cibilic is the most dangerous man in professional surfing right now. Fuelled by a light-hearted, devil-may-care attitude, the rookie is preparing to ambush his more fancied rivals in a bid for a world champion crown.

For the first time in the sport’s history, the top five men and women surfers will compete for the world championship title in a winner-take-all event at Lower Trestles, a famed cobblestone point surf break in California. 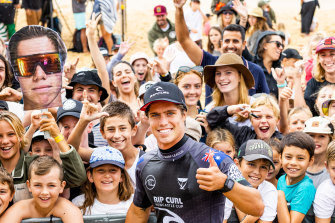 Like an old school rugby league halfback, hiding dark schemes behind a big cheeky grin, the 21-year-old Australian surfer says he has “nothing to lose compared to those other guys”.

“I think that they might underestimate me a bit,” he says from San Clemente in California, a temporary base for the past three months.

“I think I’ve proved myself a little bit this year, but I hope they still underestimate me, put it that way.”

The Rip Curl WSL finals will be staged on a single day – some time between September 9 and 17 – with interchanging elimination heats for the men and women. 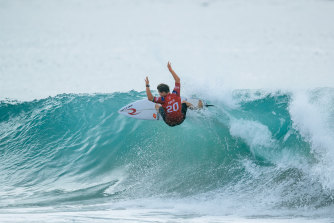 Cibilic will battle four other surfers in a bid to be crowned world surfing champion.Credit:Thiago Diz/World Surf League

Seven-time world champion Stephanie Gilmore and the high-profile Sally Fitzgibbon are the only other Australians who qualified for the finals based on points accrued during the season.

Yet, no-one expected the fifth-ranked Cibilic to anywhere near Lower Trestles in his rookie year on the championship tour.

The 21-year-old kicks off the men’s finals against American Conner Griffin in the first elimination heat. If the Australian progresses, he next takes on Brazilian Filipe Toledo, the third-ranked surfer. A victory here would then pit him against reigning world champion and another Brazilian Italo Ferreira. From this tussle, the winner is flung into a final three-heat showdown against the top-ranked Gabriel “The Freak” Medina, also from Brazil.

“It is like this huge video game,” laughs Cibilic, who hails from Newcastle but grew up surfing near Yamba and Angourie in far northern NSW.

“I was talking to someone about this today and he was going, ‘imagine if you make it to the last level and you’re versus the big boss at the end in Gabriel, and you have to challenge him three times’.”

Over the past month, Cibilic has been honing his strengths, a traditional carving power style, for the Lower Trestles surf break. However, he says he has worked on some aerial innovation if his heats require a Hail Mary, point-scoring lift.

There is no limit on the number of waves that will be scored in a heat, but a finalist’s two best scoring waves (each out of a possible 10) are added together to become a surfer’s heat total. The surfer with the highest total out of a possible 20 wins.

The rookie also is turning his mind to how he can impose himself on each heat, unnerving his rivals and bending the rules to his favour.

Under the rules, a surfer with priority has the unconditional right of way to catch any wave they choose. At the start of the heat once the first wave has been ridden, the remaining surfer in the line-up gets automatic priority. The surfer without priority can paddle for and catch a wave, but only if they don’t obstruct or hinder the scoring potential of the surfer with priority.

“Tactics can be kind of hard in our sport, just because everybody’s so unique,” Cibilic says. “And it’s not like going toe to toe with someone. But you can work them over a bit. Back in the day, people used to get in people’s heads by sitting right next to them or taking waves off them that suit their strengths.

“It’s going to be a lot fun. Maybe I should retire if I win. If it happened I’d really rip the lid off when I came home. And if it’s still COVID lockdown, I’ll rip the lid off indoors in my own house, just to be safe.”

To be young again with no fear.