The couple began building a 300-square-foot tiny house in New England on a very tight budget. "We would pay our bills, and whatever little money we had leftover, we used on materials," Chloe told Business Insider. "In the long-run, it's been great, because now we own it free and clear."

They turned to recycled materials from the town dump's recycle center, the side of the road, and the film sets they worked on to build and decorate their tiny house for just $25,000, she said.

As the recyclable materials indicate, this isn't your average tiny house. The couple also designed the house so it's expandable, providing more living space when it's parked. And, in contrast to the minimalist aesthetic that typically characterizes tiny houses, they decorated the tiny house with a maximalist cottagecore-meets-steampunk vibe.

Here's how they did it all. 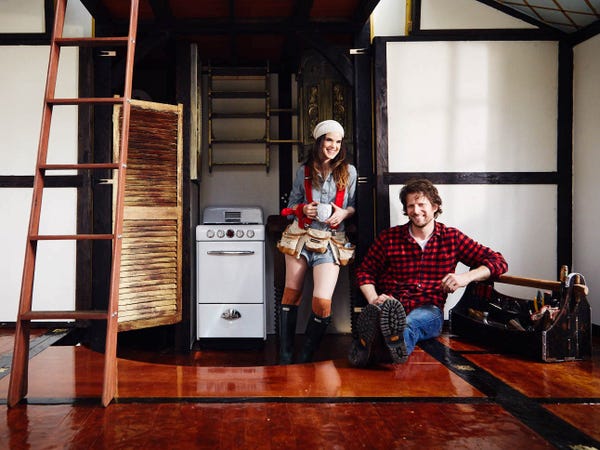 The couple runs a production company together.

They began building the tiny house in 2015, a process Chloe said was fun but challenging. The most challenging aspect was building during the winter, she added, which was seeing record-breaking snowfall in New England at the time. 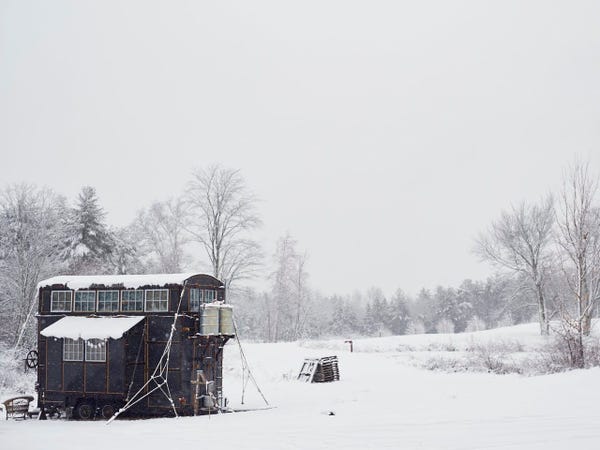 At the time, they were filming for HGTV's "Tiny House, Big Living," which put them on a tight deadline.

"We had a giant tarp, which we used to clip around the outside of the house, and it was constantly tearing off in the steady winter wind," she said. "We used a kerosene heater to take the edge off, but, still to this day, we're very cold-sensitive. I think the combination of the snow, cold, and stress has left our nervous systems forever changed."

But finding land to build on was easy, she said, thanks to a kind couple who responded to their Craigslist ad and let them use their backyard for free.

Their financial situation was also challenging. "We decided to live in a tiny home for financial freedom, but it was hard while we were building it, because we had to pay for everything in cash, upfront," Chloe said. 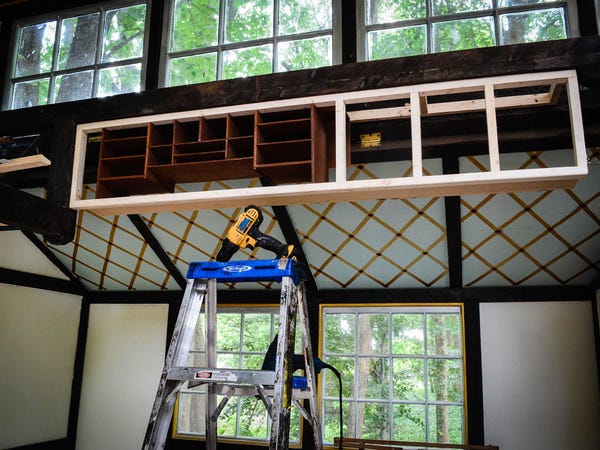 Chloe said they worked paycheck to paycheck during their build, which meant they had to get "highly creative." They often took free materials from the town dump's Swap Shed or the side of the road. 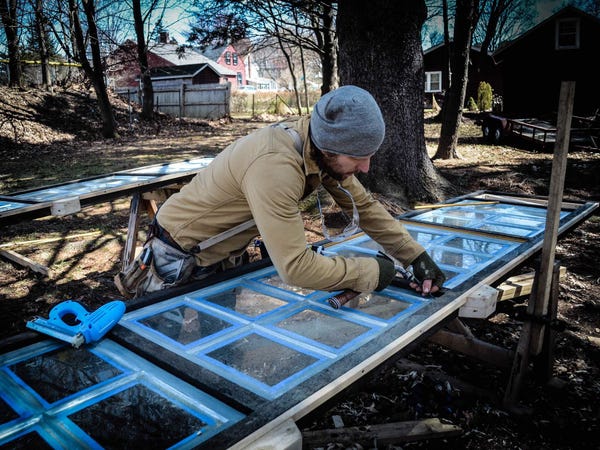 They told Architectural Digest earlier this year that they built a shower from $25 worth of reclaimed scrap metal. They built a medicine cabinet out of a turkey roasting pan and a mirror from the Swap Shed.

They also salvaged building materials from their film sets, which helped them design their old-fashioned timber frame with a French Tudor style. 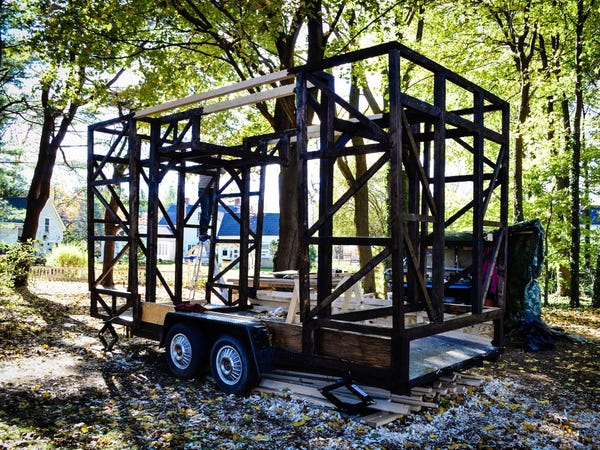 They said they salvaged 700 two-by-fours after completing their first film in 2014. They ripped the round edges off of them to construct faux hollow "beams" by gluing and screwing them together.

"This gives our home a French Tudor style, while eliminating the weight and cost that solid, authentic beams would have required," Chloe said.

Building the structure of the home took about nine months, and they moved in a year after the frame was completed. 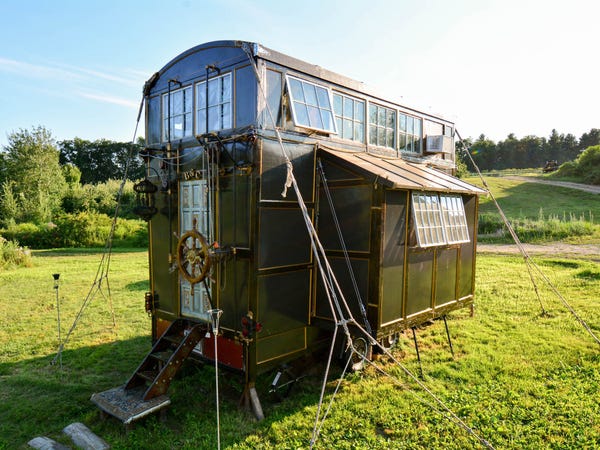 But the design itself was challenging: Their 12.5-foot-by-8.5-foot tiny house expands to 15.5 feet by 15 feet when parked. It can be expanded by using a series of block and tackle pulleys, a ship's wheel, and customized black pipe fittings. 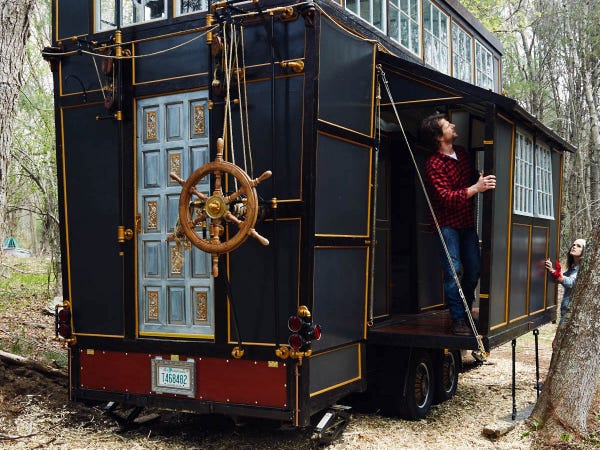 Brandon designed the expansion, which affords them more living space. Chloe said they made the tiny house expandable because of Department of Transportation road regulations that require any vehicle to be under 13.5 inches tall and 8.5 inches wide.

The expansion includes extra headroom in their loft and a space below their floor, which they plan to use for a fold-out, four-season pergola-inspired tented deck. 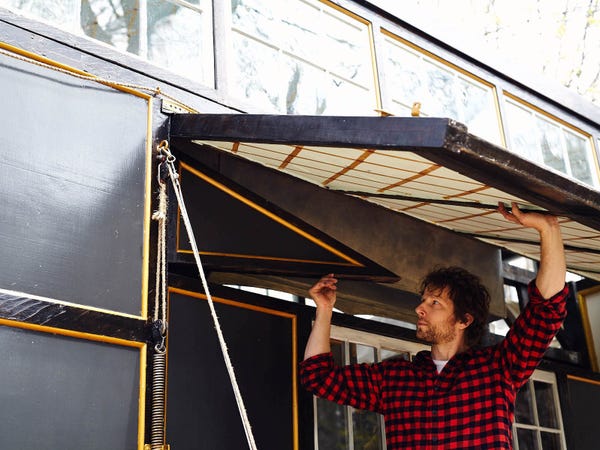 The folding wall sections in the upper loft area allows the space to incorporate 14 windows, providing 360-degree views in the loft and creating what Chloe describes as an open and roomy feeling. 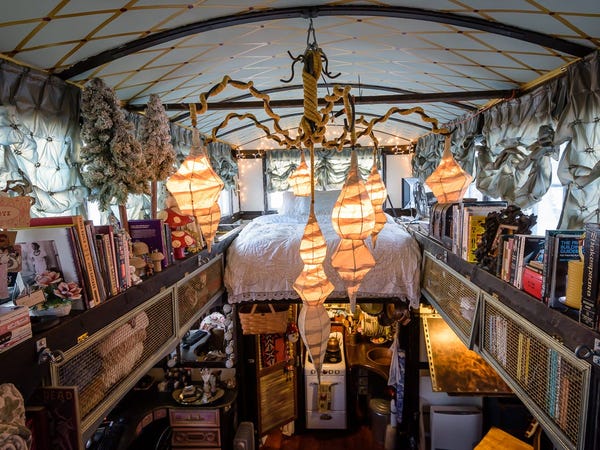 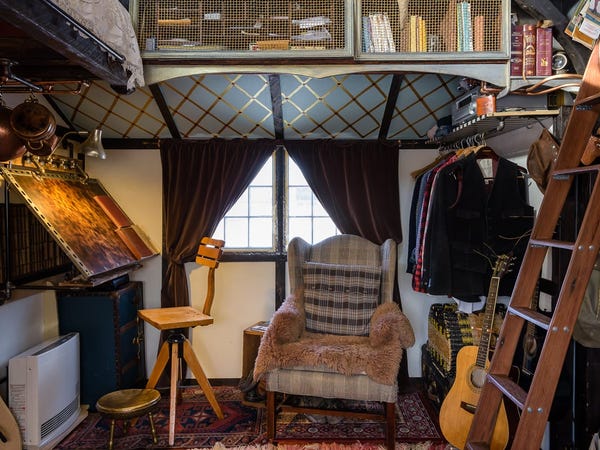 "When we're not building sets, we work from home, and it was important that we each had a space where we could express our respective styles and have some personal freedom when it comes to decorating," Chloe said.

Their offices feature built-in furniture, which provides stability while moving. "We recently built in a complete wardrobe storage system in each of our offices that pack a lot of punch for our space," Chloe added. 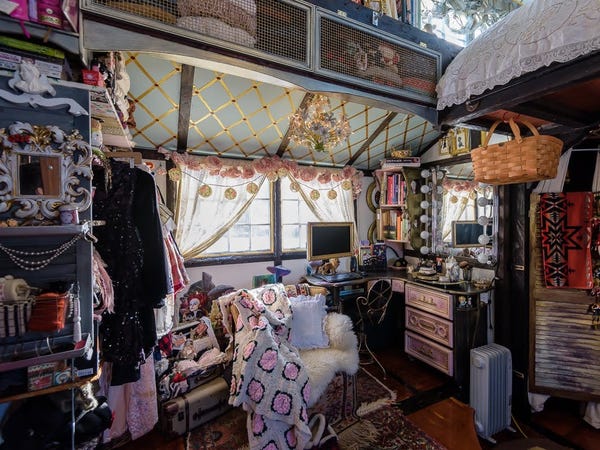 Chloe said she's also a stylist, so she has a lot of clothes.

They also built a space under the stair to the kitchen, which they nicknamed the "rabbitat," for their rabbit. It has a "Tom & Jerry" style entrance and exit in the front of the stair, which they access by lifting the top of the stair like a chest. 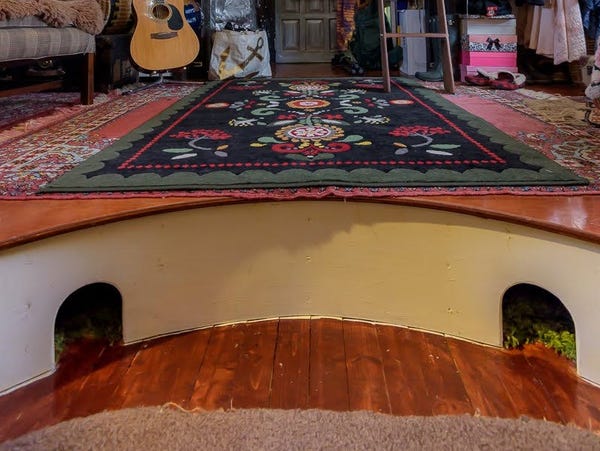 They keep the rabbit's litter box and food under there, which prevents their space from getting too messy.

Chloe said the tiny house's aesthetic comes naturally, describing it as bohemian or eclectic. "People on TikTok refer to our home as 'cottagecore,'" she said. 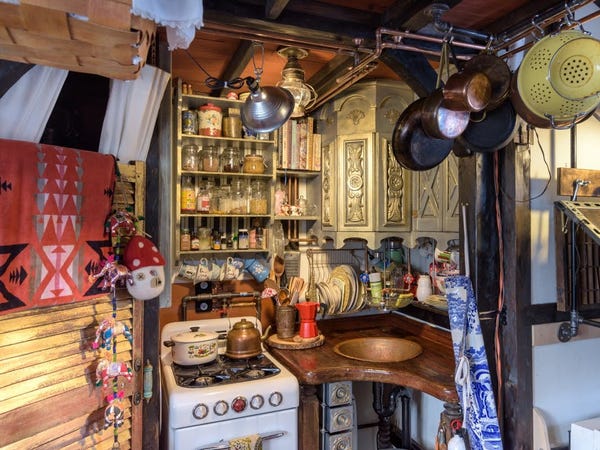 Chloe collects items she likes when thrift shopping. "I just know if I like something when I see it, and it magically just seems to 'go' together," she said. 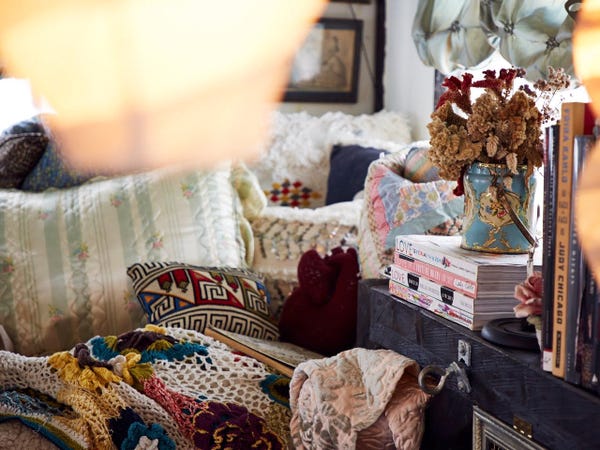 Chloe said she grew up in a very aesthetically driven family – her mom is a collector with a big home décor interest.

Brandon has also had a heavy hand in establishing the aesthetics of the home. "Brandon has a very natural knack for inventing contraptions of all kinds, as well as a natural sense of good design," Chloe said. 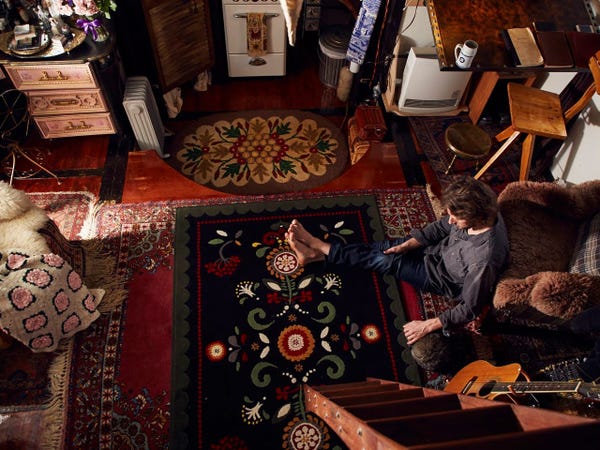 She said the design of the home was inspired by French Tudor homes, old train cars, ship cabins, and DaVinci inspired contraptions. 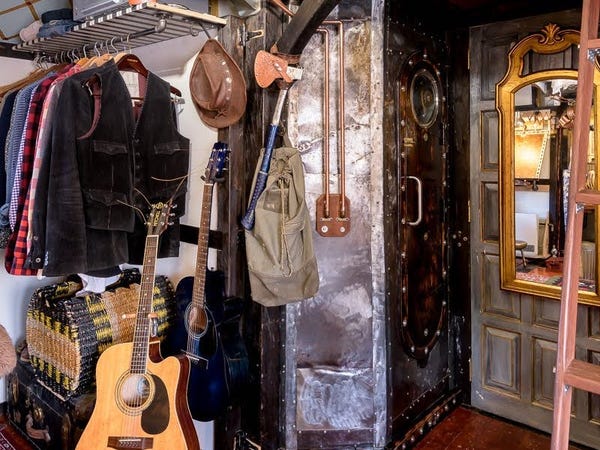 "I suppose you could also refer to it as 'Steampunk', although we don't necessarily like categorizing it as such because the movement tends to be typified by fake contraptions, rather than functional ones," she said. "But if you view Steampunk as an appreciation of old-world contraptions and décor, the term applies well."

But their tiny house is far from finished. Living in it for five years has taught them what works and what needs to be improved. "We're technically still building out the interior of our home, so we have lots of fun additions to make," Chloe said. 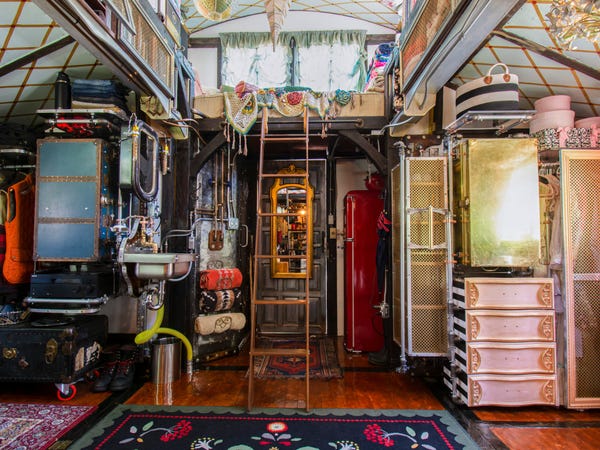