Federal Health Minister Greg Hunt has defended the rollout of the government’s online booking system after doctors told Australians to wait three weeks to book an appointment due to a rush on clinics.

The official launch of the federal government’s online portal on Wednesday led to clinics around the country being flooded with calls. 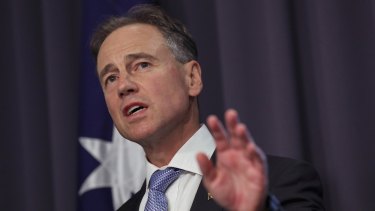 Health Minister Greg Hunt denied there had been issues with the booking site.Credit:Dominic Lorrimer

Some GP clinics fielded calls from people trying to book vaccination appointments for vaccines the clinics didn’t have and didn’t know when they would get. Other clinics were blindsided by the calls, as they were not aware their practices and contact details had been listed on the government’s website.

Many clinics canvassed by this masthead also did not have their online booking website included on the government’s page, forcing flustered clinic receptionists to direct callers to the websites.

But Mr Hunt told ABC’s AM he disagreed that there were problems with the eligibility checker and clinic finder website.

“On day one there was always going to be an initial surge and initial demand,” he said on Thursday morning.

“ I think what we should be thankful for is that the public is engaged in the vaccination program.”

On Wednesday about 243,000 people used the eligibility tracker on the Health Department’s website, Mr Hunt said.

Of those, the health minister said 9000 people registered for phase 1, “well beyond where we are now”, he said.

“What we’ve seen is a high uptake,” Mr Hunt said. “And day one was always going to see a significant initial demand and I’m very pleased about that.”

Labor’s spokeswoman for education and women Tanya Plibersek told 2GB the launch of the website on Wednesday had caused chaos for people wanting to book vaccine appointments.

“It’s not the fault of the GP clinic staff that this is poorly organised,” she said.

“This vaccine rollout, this is too important to stuff up. So they need to really double down and get this right now.”

Royal Australian College of General Practitioners vice president Dr Bruce Willett said on Wednesday that receptionists at his practice fielded more than 100 calls alone on Tuesday morning, as the clinic’s online booking site was not listed on the government’s webpage despite a request to have it added on Tuesday.

Dr Willett’s 20,000-patient clinic in Queensland is receiving just 80 doses a week. He said there would be ongoing issues of supply and demand.

“I would request that people don’t call their practice for the next three weeks, because we really just can’t meet the demand with the number of vaccines,” he said.

“We want everybody to be kind to our receptionists, they’re all going to get inundated,” he said.

By the end of Thursday, the government expects more than 240,000 will have been vaccinated, about four weeks into the national vaccine rollout. The initial goal was to have all 678,000 high priority people vaccinated within six weeks.

Get our Coronavirus Update newsletter

Stay across the news you need to know related to the pandemic. Sent Monday and Thursday. Sign up here.