A brolly good time! Glamorous Royal Ascot revellers whip out their umbrellas as they don vibrant frocks and sky-high heels on day four of the racing festival

Stylish racegoers didn’t let the rainy weather conditions stop them from putting on a glamorous display as they arrived for day four of Royal Ascot.

As they descended on the beautiful surrounds of the famous Berkshire racecourse, arrivals were faced with a torrential downpour that had them reaching for their brollies.

Unprepared for the wet weather, revellers were decked out in a sea of glamorous summer dresses in silks and chiffon. But many refused to let the rain dampen their spirits and were seen getting into the party spirit early, with glasses of Pimms and mini bottles of Moet Champage flowing.

While some were forward thinking enough to come armed with an umbrella and even ponchos, others ducked for shelter and got creative with plastic bags in a bid to keep their hair dry.

Elaborate headwear was the order of the day for many, with oversized hats and flamboyant fascinators adorned with feathers, flowers and frills spotted in the enclosure. 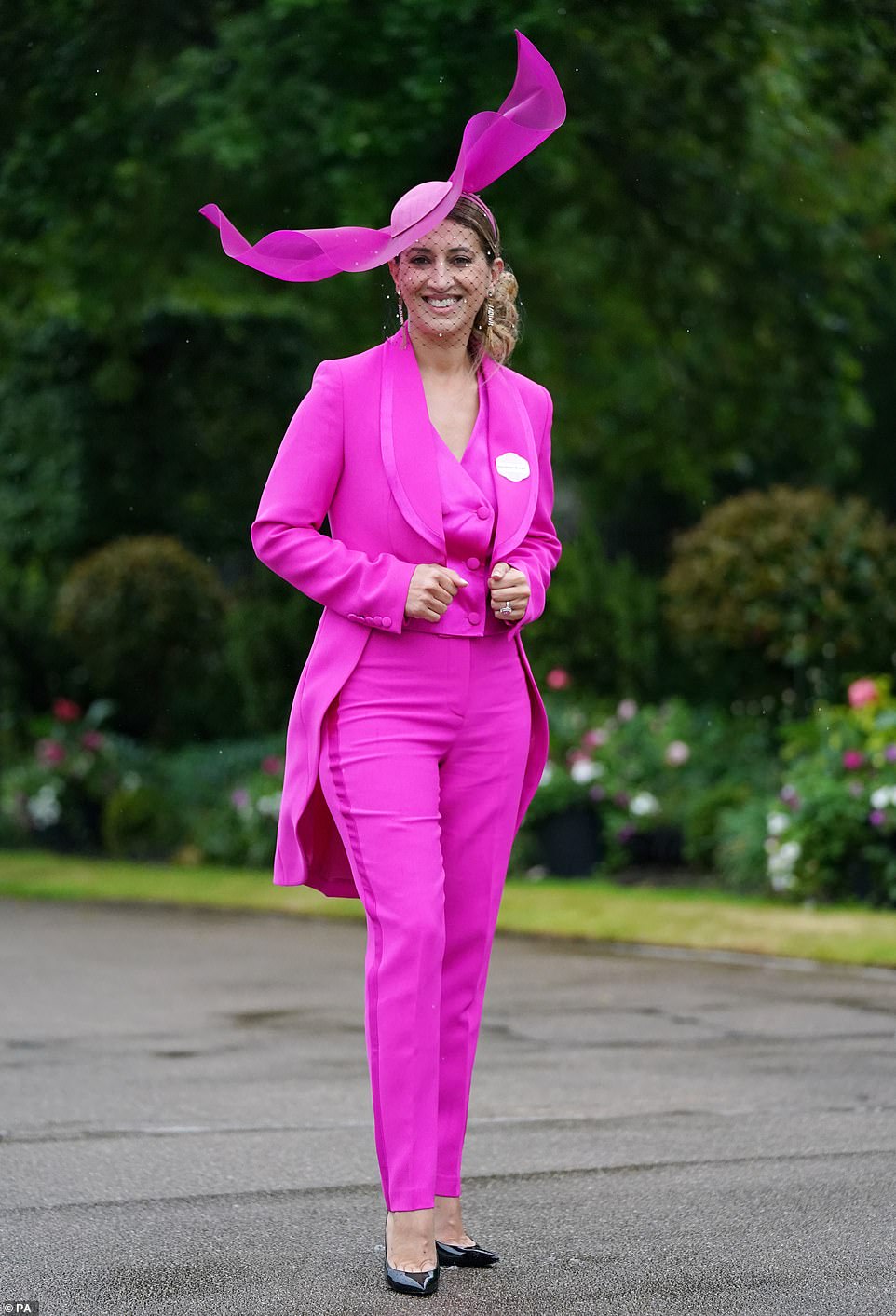 Not raining on her parade! One reveller didn’t let the wet weather dampen her spirits as she arrived in a bright pink three-piece suit complete with flamboyant fascinator and matching brolly 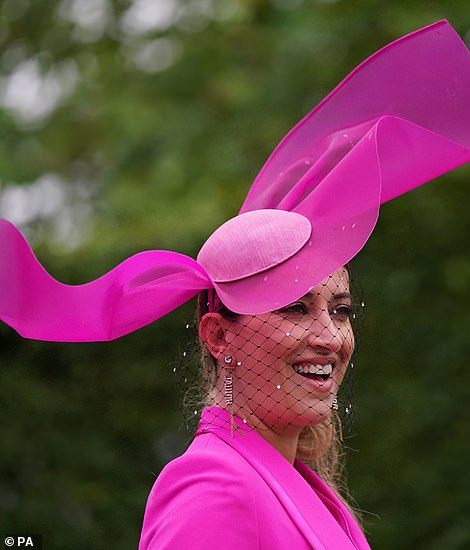 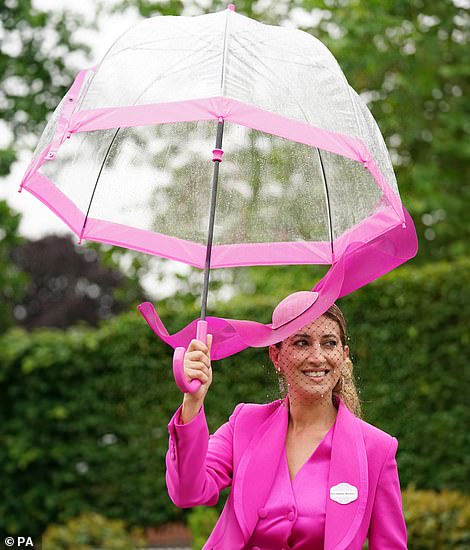 Flamboyant fascinators took centrestage on day four of Royal Ascot, while some perfectly matched their umbrellas to their ensembles

Bright sparks: Despite the weather racegoers did not disappoint with their sartorial display of carnival brights – including this reveller who opted for a yellow two-piece suit 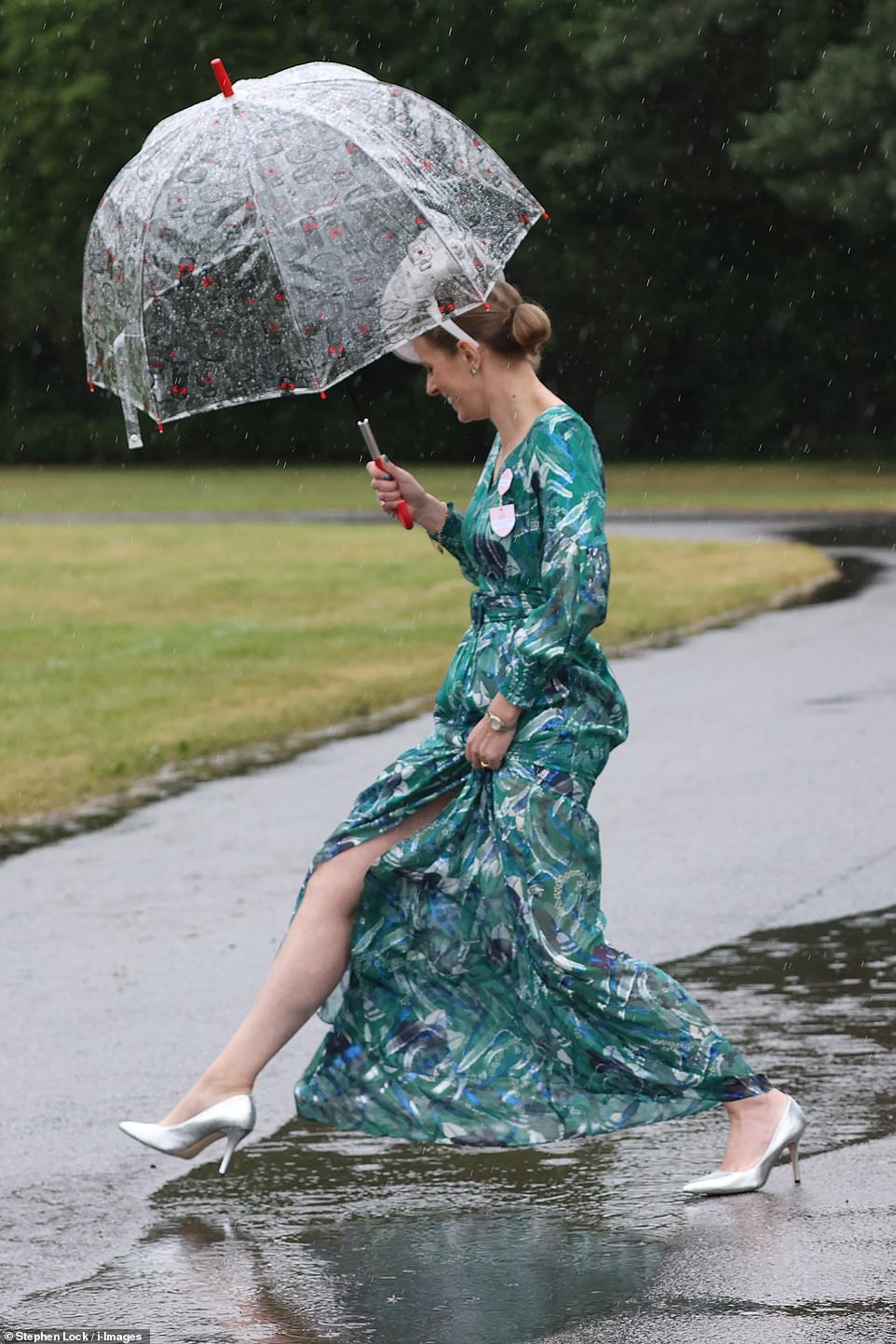 It’s a washout! One female racegoer hoisted up her chiffon gown as she stepped over a puddle in her skyscraper heels on arrival on day four of the racing festival

In total, 12,000 revellers have been granted tickets to each day of Royal Ascot as part of a list of pilot events taking place before the possible lifting of all lockdown restrictions next month.

On Monday Boris Johnson announced a four-week delay to ‘Freedom Day’ – but any disappointment looked far from the minds of racegoers as they kickstarted their weekend celebrations early.

Two world-class Group 1 races provide the highlights on the track for the fourth day of the racing festival with a supporting cast of three competitive handicaps and two more Group level contests. 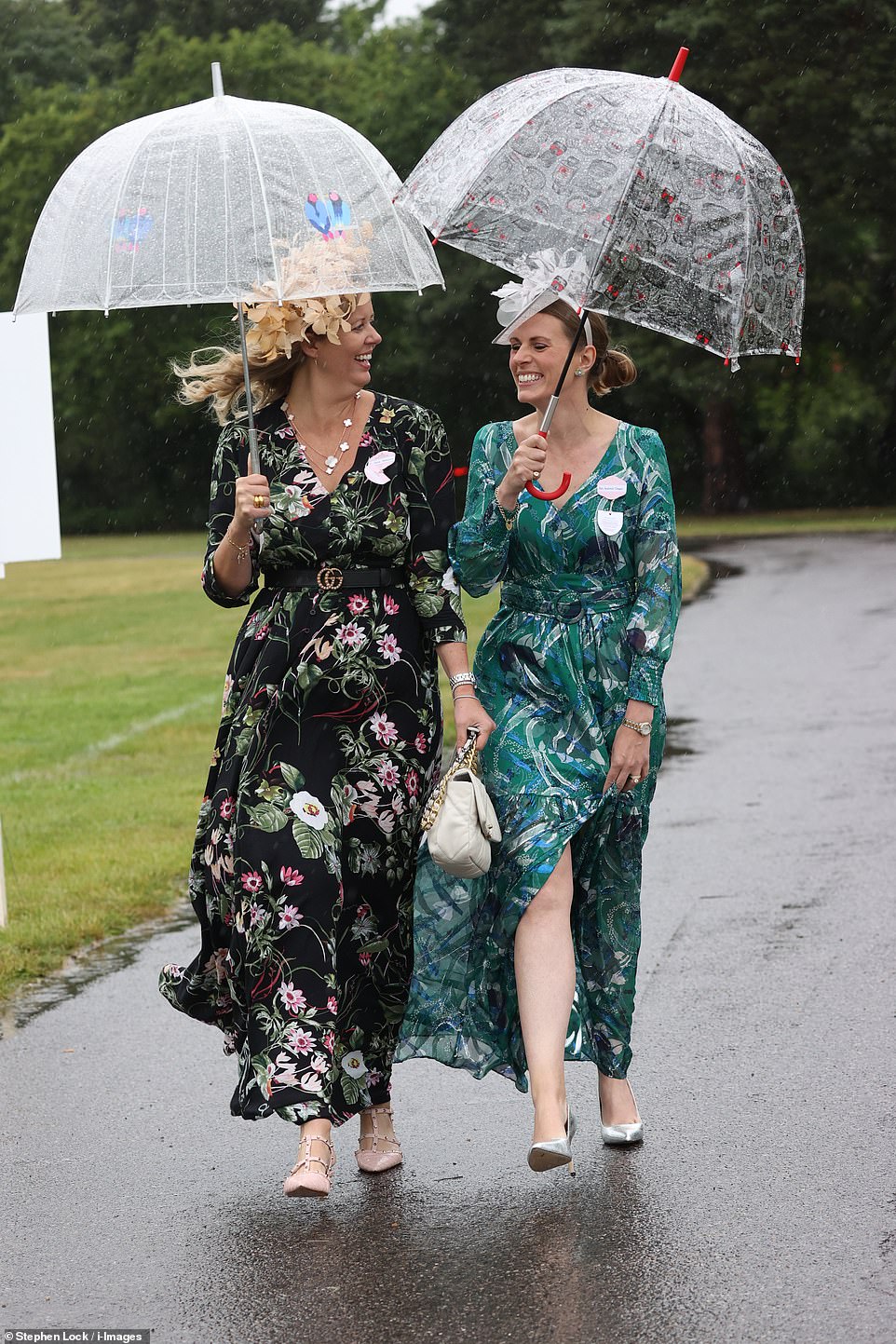 Singing in the rain! These patterned pals didn’t let the wet weather get them down as they took shelter under their umbrellas 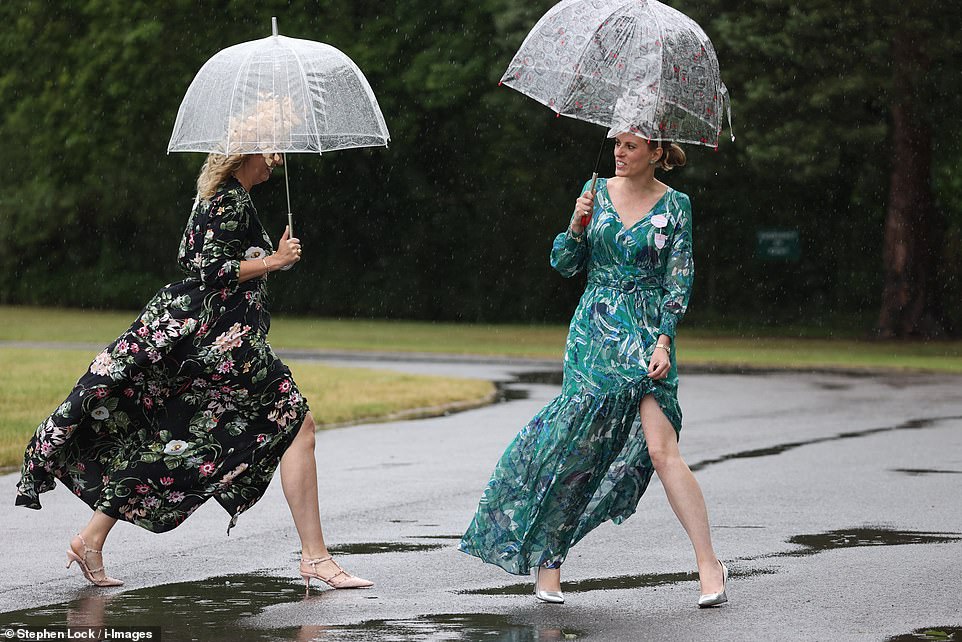 Daring hemlines! Two women battled the elements as they arrived in chiffon dresses for a day of festivities as they kickstarted the weekend 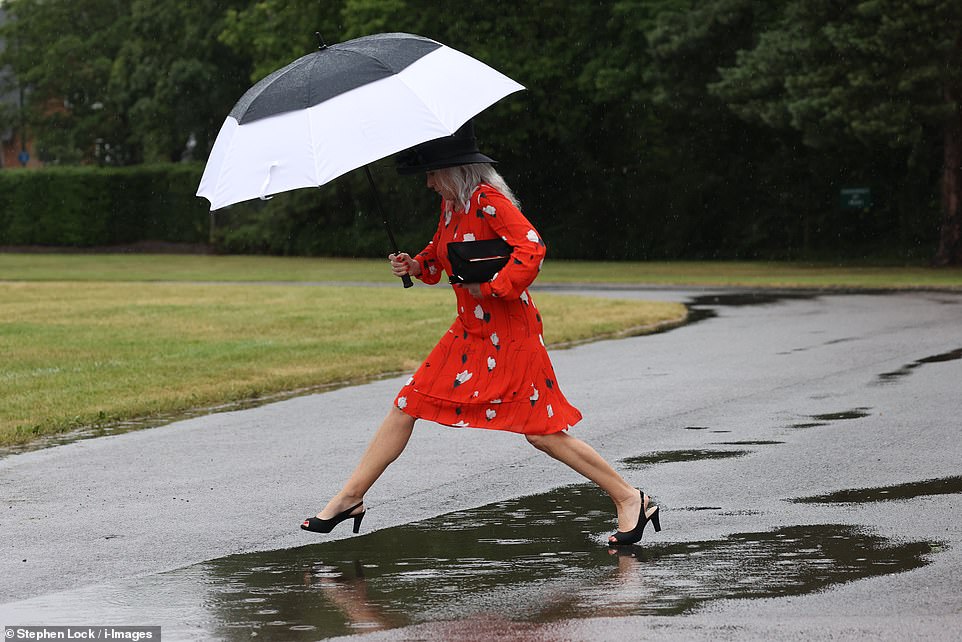 Lady in red! One lady was spotted taking a big step over a puddle in open-toe heels as she kick-started the weekend early 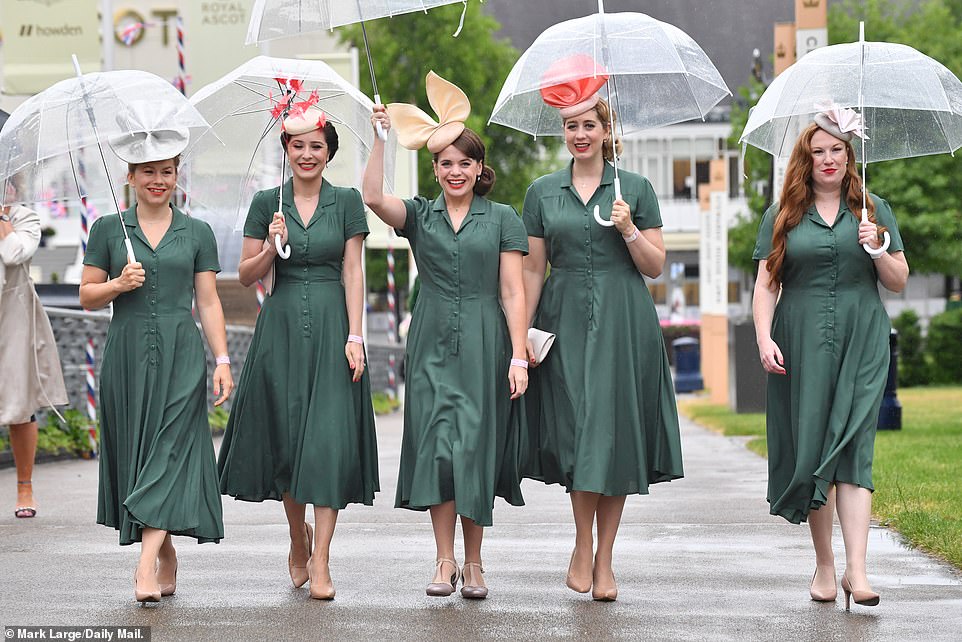 Brushing off the bad weather! Women looked glamorous in green as they arrived in vintage-inspired ensembles for day for of Royal Ascot today 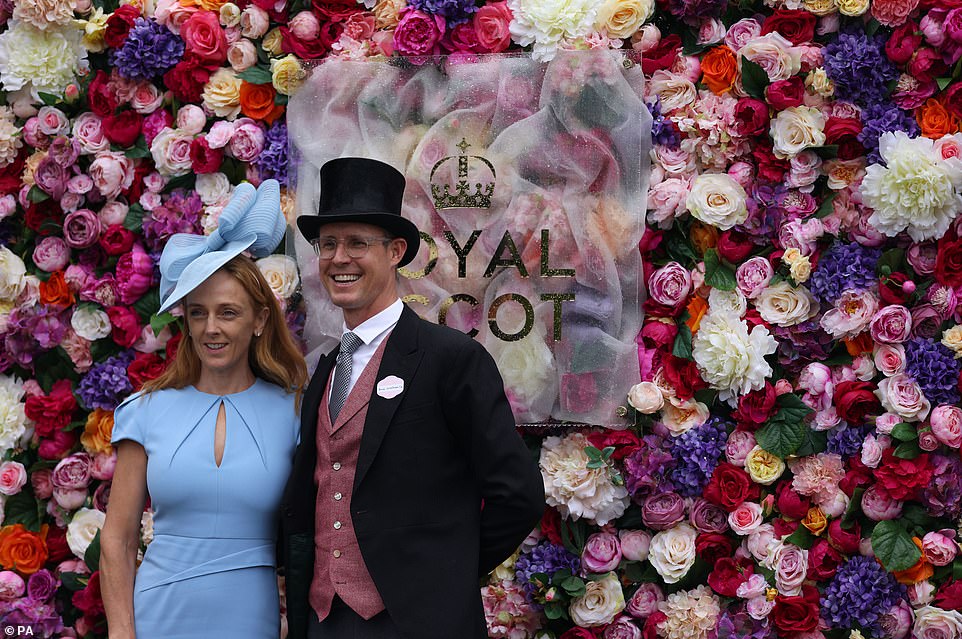 Pretty in pastels! One optimistic racegoer donned a pale blue frock while a male reveller looked dapper in a top hat and tails 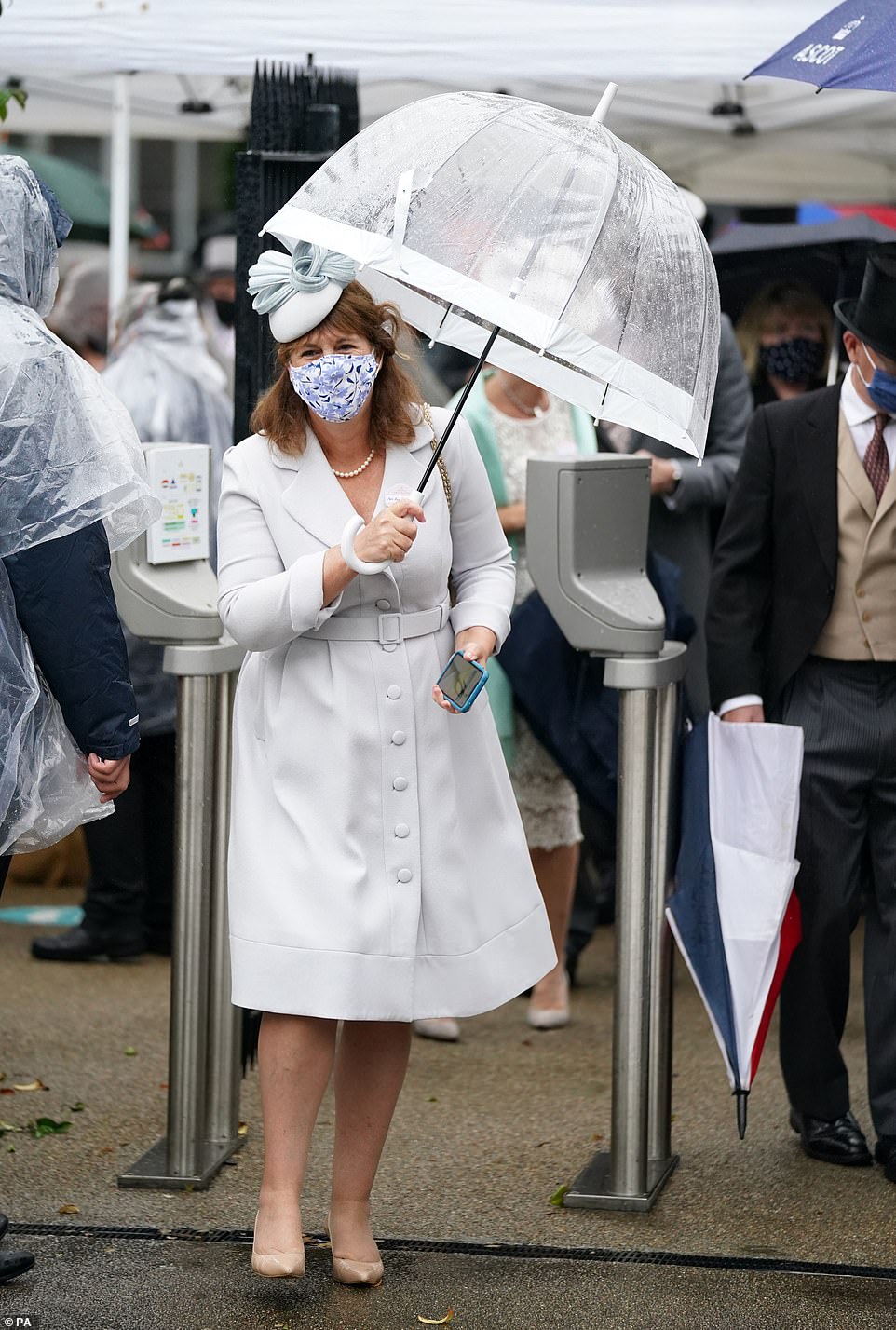 Cream dreaming: This elegant lady does her best to protect her pristine ivory outfit from the showers 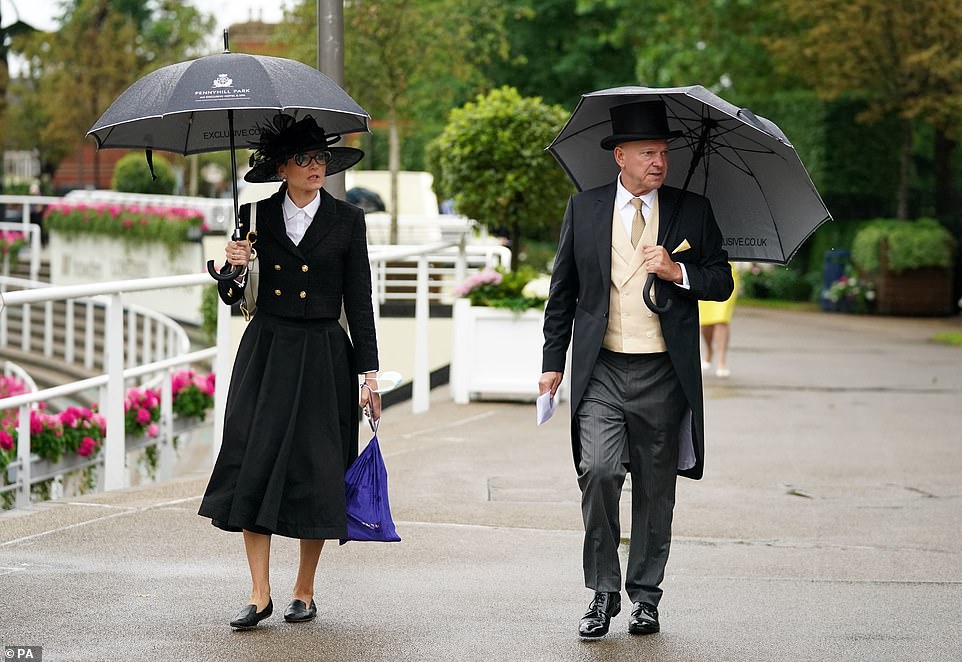 Taking cover! Elaborate headwear was the order of the day for many female reveallers, while men looked dapper in top hats and tails

Zara Tindall was also in attendance, accompanied by close pals Dolly Maude and Chanelle McCoy, as was her mother, the Princess Royal, 70, who looked radiant in yellow – but it remains to be seen who will attend today.

On Wednesday, Sophie was joined by senior royals including Princess Anne, Prince Charles, the Duchess of Cornwall and her husband Prince Edward.

One notable exception to the royal line-up was the Queen, 95, but Prince Charles and the Duchess of Cornwall were spotted taking a keen interest in the races as her horse King’s Lynn took part in the King’s Stand Stakes -finishing in seventh place.

The Queen missed Royal Ascot for only the second time in 69 years. Her Majesty’s racing manager confirmed the monarch would not be attending on Wednesday but is hoping to make it later in the week depending on ‘how things go’.

The Queen’s racing manager John Warren told Radio 4: ‘Obviously the Queen would love to attend, as you know she’s fanatic about racing, watching racing and breeding horses, and has been going to Ascot all of her adult life. So, it’s a shame to miss an event.

‘The plan at the moment is to see how it goes towards the latter part of the week and if the Queen’s able to come because she’s got runners, then, fingers crossed, it will happen.’

He added that the monarch was ‘fanatic’ about horse racing, and called her energy levels ‘incredible’ despite her age.

He said: ‘It’s remarkable. The Queen’s energy levels are incredible. She’s 95. She went down to the G7 this week, and trundled back on the train in the middle of the night and the energy will be raised higher again for a week like Ascot.’

Glamorous in green! Many were forward thinking enough to come armed with an umbrella as rain swept across the Berkshire racecourse 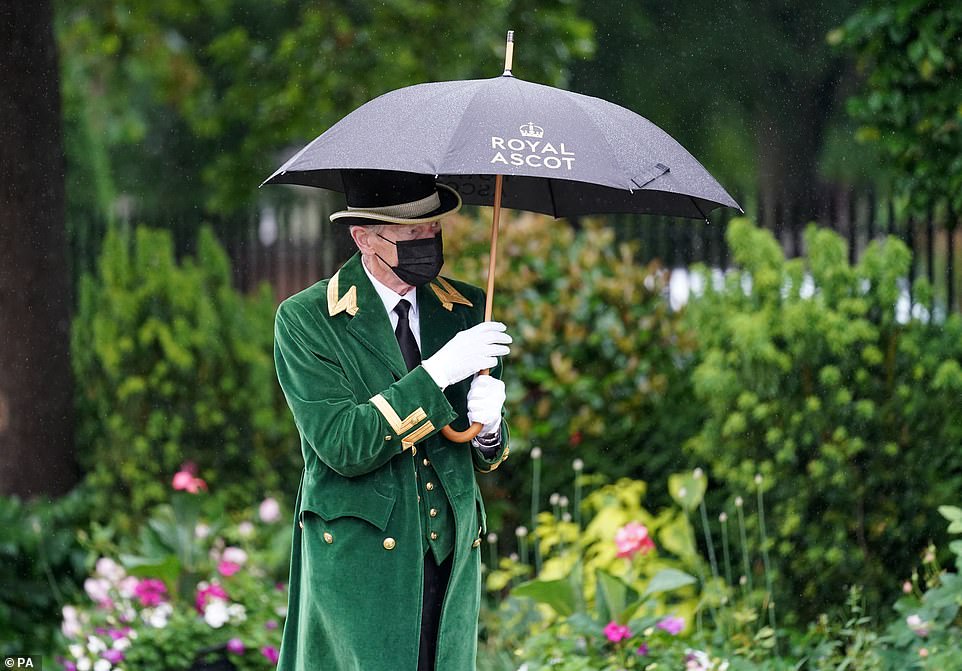 Brollies at the ready! Staff members could be seen sheltering under umbrellas arriving at Royal Ascot today

However he said the experience would be different for the monarch, adding: ‘In the past, she would have gone and looked at horses in the paddock, even though they weren’t hers because she is so fascinated in the breed so she’d want go and look at the stallion prospects of the future.’

John continued: Every race that takes place every day of the week, the Queen will certainly read the Racing Post every morning, look at the breeding of all the winners the day before, and see that these stallions that she uses will be potential horses for her own mares.

‘It’s a deep fascination, a very broad escapism for all the other things that the Queen has to deal with in her life.’

The Queen has a number of runners at the Berkshire racecourse, with Mr Warren tipping Tactical in the Jersey Stakes on Saturday as a potential winner.

Last year – when Ascot was held behind closed doors – was the first time the Queen had missed it in her entire reign.