“Nobody told me… my best friend would be my surrogate”

Kylie Jenner Has The Perfect Response To Critics Of Her Shower

On January 4, 1971, Sesame Street debuted on Australian television. In this article from the archives, we take a walk down an enchanted street, as Sesame Street turns 50 in Australia.

Down an enchanting Street

On the sunny spring afternoon when most of Melbourne was glued to the Grand Final, I was in the park with my toddler and a friend and her toddler. (Small children have little respect for that great day in October …) 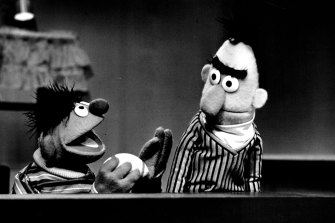 As the kids ricocheted around the playground, their football-widow parents discussed video clips, specifically 'You've Got to Put Down the Ducky It You Want to Play the Saxophone', a Jazzy number featuring an array of 'Sesame Street' muppets plus assorted guest stars (Paul Simon, Danny de Vito, Jeremy Irons and many others).

The revelation of our shared devotion to 'Sesame Street' produced mutual pleasure. We rhapsodised about the series' musical numbers: 'Born to Add' based on the tune of 'Born to Run', the country-and-western version of 'Oklahoma', the spoof on 'Chariots of Fire' with furry blue paws gouging the sand.

Since 1971, Australian parents have debated the merits of the landmark series produced by the Children's Television Workshop and featuring the muppets created by the genius of Jim Henson. I say "parents" because people who don't have children — unless they have some professional interest — are not generally watching children's TV at 8.20 am or 3 pm on weekdays.

For almost 20 years, opinions on it have been divided. Though critics of the series concede its vitality, humor and inventive approach to basic education, they harbor reservations about its ultimate worth. Children are not actively engaged but passively amused, they argue. The distinctive style — of short segments that whiz between animation, puppetry and live action — fosters a limited attention span that may produce problems when children reach school.

The argument goes that those children unrealistically expect their classes to match the pace of the program, or their teachers to magically metamorphose into the letter B when they're teaching the alphabet.

'Sesame Street' is decried as a sinister weapon of American cultural imperialism. It tells our young ones that biscuits are "cookies", that the stuff in bins is "trash" not rubbish. It has no koalas, or songs like ‘Waltzing Matilda'. 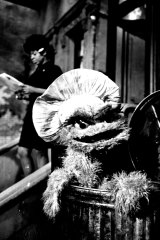 The only one every grateful for a cloudy day, Oscar the Grouch in 1972.

Earnest discussions at playgroup invariably conclude that TV is a time waster. If its merits are acknowledged at all, the consensus is generally that it should be regarded like medicine: taken with care in small doses, under guidance and only when necessary.

I must confess, with only a fleeting attack of parental guilt, to be an avid supporter of 'Sesame Street'. As I enjoy with my child the dally delights of Bert and Ernie, 'Monsterpiece Theatre', and the myriad songs and dances, I rejoice in the feeling that this is another wonderful experience that we can share.

She might not know that it’s Cab Calloway doing a soft shoe and singing 'Jump 'n' Jive'. But she certainly relates to that smiling man and his infectious beat. She doesn't care that it's Yo Yo Ma conducting a symphony for hooters and tweeters, but she sways to the music and relishes the color and movement.

Like the very best programs designed for children, 'Sesame Street' enchants adults. It charms with its warmth and humor, delights with its characters and dazzles with its visual imagination. It has a timeless quality that transcends the latest fads, a quality ensured by a seemingly boundless wellspring of imagination.

Initially conceived as a vehicle for teaching children from low-income, inner-city families basic alphabet and number skills, 'Sesame Street' has won an international audience, and, whatever you conclude about its ultimate value, it's not hard to see why.

The world according to 'Sesame Street' is an inviting and inclusive place. Skin and fur color are irrelevant, grouches are cheerfully tolerated, visitors are welcomed.

It is a microcosm of an ideal society where characters live in harmony and life is a procession of diverse and stimulating activities. The inhabitants care about each other while appreciating their basic differences. On 'Sesame Street', no one is ever bored or isolated for long. There is always something happening and if it's not to your taste, it's over in a few minutes and something else begins.

The detractors view its pace as a problem, preferring the more sedate and everyday rhythms of something like 'Playschool'. I have no gripe against 'Playschool' (in fact, I live in awe of people who can construct a multi-function polls from a shoe box and two bits of string).

Yet, surely here, as elsewhere in life, the possibility for alternatives should be embraced, rather than viewed as mutually exclusive. We are in the fortunate position of being able to have the park, the books and the sandpit, of having the choice between 'Playschool', 'Sesame Street' and John's wonderful songs on 'Mulligrubs'.

Not even the most ardent 'Sesame Street' enthusiast would suggest that children should spend their waking hours glued to it. Yet the opportunity to drop by for a while is an opportunity to be cherished.

I don't care if my toddler calls zed "zee" because 'Sesame Street' is just one of a multitude of activities that we can share, a precious fragment that has its place and value. I can teach her 'Waltzing Matilda' or introduce her to Blinky Bill. I know that, soon enough, she'll learn about boredom, frustration and intolerance.

And I also know that when we watch 'Sesame Street', we can sing, dance and delight in the antics of the Count and Super Grover together.