FIVE IN A CRITICAL CONDITION

ARRIVAL OF THE DEAD AND WOUNDED 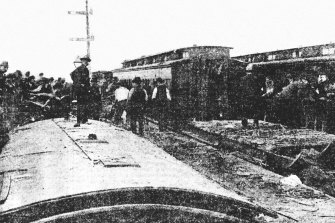 The first photograph ever published in The Age shows the collision between the two train at Braybrook.Credit:The Age Archives

The awful railway calamity that occurred at Sunshine (or Braybrook) late on Monday night has grown more appalling as time and investigation disclose the details of its tragic realised. The dead number 43, the seriously injured 44, and the slightly injured nearly 100. The ordinary train, crowded with holiday makers, left Ballarat for Melbourne at 7.15 p.m. Customarily it consists of from five to eight carriages, each giving accommodation to about fifty people. Owing to the heavy holiday traffic it consisted on Monday of eight carriages, each of which was uncomfortable crowded. Regarding the exact number to travelled, the department professes ignorance, and up till yesterday afternoon the leading officials could not say whether the train left on its journey up to time. At 6.50 p.m. a special train, also crowded with holidaymakers, left Bendigo. The Ballarat passengers were a happy load. Included amongst them were several card parties, family groups, who while away the travelling hours by singing, and no fewer than four merry bridal parties. The Ballarat train was expected to reach Braybrook – seven miles from Melbourne – at 10.30 p.m. and it reached there some minutes – there is a conflict of evidence on the point – behind its scheduled time. Owing, however, to its length, the carriages overlapped the Braybrook platform, and as there were numbers of passengers who wished to alight or get aboard there it was necessary to move on the train a second time, in order to bring the overlapping carriages to the platform’s edge. The Bendigo special was timed to reach Braybrook at 10.30 p.m., and it was tell on time. While the belated Ballarat train was slowly steaming out of the station the lights of the Bendigo special flashed into view, its two locomotives smashed through the points locked against it, and crashed into the rear carriages of the Ballarat train as they were slowly leaving.

The approach of death was not entirely unobserved. Looking out from a carriage window a number of young girls aboard the Ballarat train heard the rattle, and saw the engine sparks of the Bendigo special tearing down upon them through the partial darkness, and threatening immediate annihilation. They tried the door. To their dismay it was locked. This paralyzing spectacle was shared by another. A woman who stood upon the Braybrook platform caught a glimpse of the rushing locomotives when they were still distant a few chains. Distraught with horror she buried her face in her hands, and reeled into the station building to hide from the approaching calamity – to blot the contemplation of its unnerving terror from her stricken senses. The impact came with the suddenness of a clap of thunder. The first of the great AA locomotives in front of the Bendigo special crashed through the rear carriages of the Ballarat train as easily as if the thick, rigid iron and wood work were brittle as egg shells. To the few who stood, appalled and paralysed with fear, and watched its death dealing progress the monster still seemed to be ploughing onward moments after the collision. First one carriage, then a second, then a third and then a fourth were smashed, tossed off the rails, and pulverised under its tons of steel and its pitiless wheels. At every foot of its onward course the life was crushed out of some poor holidays maker or a broken, mangle body was angrily tossed aside in its last agony. 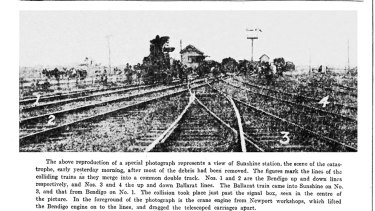 First published in The Age on April 22, 1908.Credit:The Age Archives

When the engines of the Bendigo special were at length brought to a standstill those who escaped and the people on the station beheld a sight which it is fortunately given to few to witness. The leading Bendigo locomotive reared its heavy mass of metal above a mound of wreckage and of mangled bodies. Along its side hung fragments of wood and iron, and two flaccid corpses, torn and crushed into shapelessness. Down on the rails amongst the piles of piles of splintered wood work and the upholstery, their blood and brains splashing the wheels, many more dead bodies and bodies in which there was still life mingled in frightful sickening heaps in a way that seemed to defy extrication. The screams of the women, the agonising groans of the wounded, the shouts of men whose senses had been swept away, added to the horrors of the night. Mothers with disheveled hair and maniacal eyes frantically appealed for their children. Those who could climb out of the carriages on ahead tore hither and thither, searching with fast disappearing hopes for relatives and friends. All this passed in a few terrible moments. For forty the last terrors of this world had ceased. For many others suffering and death still threatened in another form. The splintered carriages were found to be on fire. Through an enveloping cloud of smoke and steam tongues of flame shot out through the wreckage, and for a few seconds spread with a horrifying rapidity. Pinioned fast amongst the debris, with crushed hands and feet and broken limbs, the wounded who still retained their sense felt the stifling heat and smoke encompass them, and shrieked and shrieked to be torn from the vice-like weights that held them. Even at this terrible moment there were cool heads and courageous hearts in that pit of death, who were ready to sacrifice the chance of life itself for others. More than one man said when the assistants came – “Never mind me; look to the women and children.”

People ran to the scattered Braybrook dwellings for succor. The fire bell was rung, and the Braybrook firemen dashed to the scene with their appliances. Medical men were summoned from the city and the nearer suburbs, and the news flashed to the officers of the Railway department. The story of the arrival of the casualty vans has already been told. How many people were hidden beneath the mass of wreckage nobody knew. Some said a dozen; others a hundred. The wounded were hailed out, and the surgeons set to work upon the bleak open platform to inject morphia, to set the broken limbs, and to bind up the gaping wounds. Many were found to be dead. Others died before the doctors completed their attentions. As the bodies lay side by side, to a number that seemed in the circumstances to defy counting, they presented pathetic sights, before which women fell in fainting fits and from which men slunk away in palsied fear. Heads were crushed in and flattened; necks were entirely, and almost entirely, severed; and livid, blackened, open-mouther corpses stared grimly towards the heavens, their battered features still showing the contortions of horror into which they had been twisted, or the tortures of suffering experienced at the approach of death’s terrifying spectre. Amongst the rows of death there was the body of a woman, with both her legs from the angles to the thighs tightly bound in splints and bandages. She had received relief such as could be afforded, but she was dead. 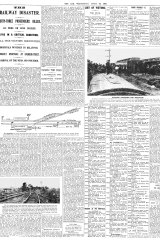 First published in The Age on April 22, 1908.Credit:The Age Archives

As the feverishly working railway men sifted through the wreckage, body after body was discovered buried beneath. Early in the morning – the last body was not unearthed until 3.30 a.m., or over four hours after the catastrophe – the ill news had travelled apace, and scores of tearful people, agonised with suspense by the knowledge or the thought that relatives had travelled by the ill-fated train, gathered near the station and watched and waited with harrowed feelings as the clearing work proceeded. The cries and lamentations of those whose parents, brothers or children had gone out gaily to spend the holiday, were now to be carried home mangled and dead, were enough to shake the heart of the stoutest.

Yesterday morning there were three scenes that Melbourne’s citizens who saw them will not easily forget. They seemed to focus in harrowing form the tragedy of the previous night. At Spencer-street station, lying side by side in a shed, were forty mutilated dead bodies of men, women, girls and boys. Outside the building were crowds of people waiting their turns to reverently walk down the lines of death and assist towards identification. Every now and then a heart-quavering scream arose from a woman who recognised a dead relative, and for minutes together there were rending sobs and wailings. At the hospitals grief-stricken people hurried to and fro fearing the worst. At Braybrook workmen were still clearing away the heaps of debris, and women were still waiting and watching in agonies of dread. Either of these scenes had found a parallel at Spencer-Street on the night before, when news of the catastrophe reached Melbourne. Scores of anxious people, torn with doubts as to the safety of their loved ones, besieged the railway offices seeking for information. They sought in vain. Certain railway officials, as if dreading unknown terrors if they opened their mouths, either evaded them or appeared to be anxious to hush up the fact that there had been a railway accident altogether. Suffering humanity was counted as nothing when compared with absurd railway regulations, and the anxious ones suffered until their feeling were relieved by outside people less callous and more intelligent.