Japan’s former prime minister, Shinzo Abe, wants his nation to collaborate with the new military pact between Australia, the United Kingdom and the United States amid an “increasingly severe” regional security environment.

The AUKUS partnership was formed in September with a view to the US sharing its nuclear submarine technology with Australia, and the three nations co-operating on defence and national security interests such as cyber capabilities, artificial intelligence, quantum technologies and undersea drones. 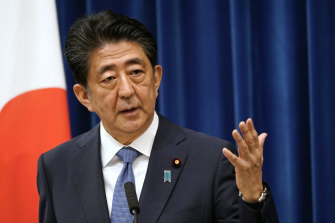 Prime Minister Scott Morrison revealed on Wednesday Australian officials would report back within a month on how these would be developed under the pact.

Mr Abe wants to see Japan “engage in the co-operation in these areas” with the AUKUS grouping.

“It is extremely important for Japan to collaborate with the AUKUS with a view to promoting multi-layered efforts for peace and stability of the Indo-Pacific region,” he told former prime minister John Howard during a question and answer session at the inaugural Sydney Dialogue conference on Friday.

“My sense is that Japan may be able to co-ordinate with efforts in the areas of science and technology under the AUKUS or US-EU Trade and Technology Council in the coming months.”

Japan has previously said it would like to join the Five Eyes intelligence-sharing alliance between Australia, the United States, Britain, New Zealand and Canada, saying it shared with the Western nations “universal values and strategic interests” in the face of a rising China.

Australia’s top cyber spy, Australian Signals Directorate boss Rachel Noble, said on Thursday it would be unwise to permanently expand the network but kept alive the possibility of collaboration between the Five Eyes nations and countries such as Japan.

Mr Abe did not explicitly mention China in his keynote speech, but he noted he had long championed the concept of a free and open Indo-Pacific. This culminated in the first face-to-face meeting of the Quad leaders – Prime Minister Scott Morrison, Mr Abe’s successor, Yoshihide Suga, US President Joe Biden and Indian Prime Minister Narendra Modi – in Washington in September.

Mr Abe said the Australia-Japan partnership had grown significantly over recent years but he would like to see it strengthened.

“Given the regional security environment, which has become increasingly severe, there is a need to elevate Japan-Australia bilateral security and defence co-operation to a new level … with a view to contributing to peace, stability and prosperity of the Indo-Pacific region and beyond,” Mr Abe said.

Further co-operation should also happen through the Quad framework and a separate Japan-Australian-US grouping.

“From this perspective, it is essential for Japan to further promote co-operation in such areas as Japan Self Defense Force-Australian Defence Force co-operation by increasing the complexity and sophistication of bilateral exercises and operations, supply chains for goods, services and critical minerals, space and cyber issues, and economic security such as digital and critical technologies.”

Fascinating answers to perplexing questions delivered to your inbox every week. Sign up to get our new Explainer newsletter here.