It ran for 30 years, somewhat of a record. Hey Hey It’s Saturday was a cultural institution during the 1970s, ’80s and ’90s; millions watched and it won 19 Logies. It was slapstick, silly, raw and seemed unrehearsed, with segments like “What Cheeses Me Off!” and “Celebrity Head”. Front man Daryl Somers won the Gold Logie three times.

As a kid, I was unmoved by Somers. I preferred his sidekick, the effervescent Jacki MacDonald, though I got annoyed by the constant smut and sexual innuendo thrown her way, along with the playing of Folks Are Dumb Where I Come From when she walked on set – intended as a barb at her native Queensland. The clueless, perky lady trope became entrenched even though her talent was obvious. 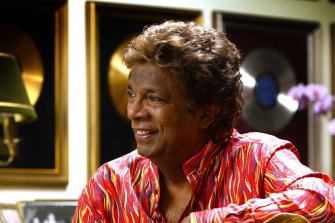 Kamahl has opened up about being humiliated on Hey Hey It’s Saturday.Credit:Danielle Smith

I had a quiet dream of going on the Red Faces segment as a girl, where people would perform amateur talents – burping on cue, playing teaspoons, singing odd songs, all rough and eager. It was daggy and often funny, featuring performers from four months to 96-years-old. Some sketches were truly awful – though I suspect not the one Cate Blanchett performed with the Melbourne University law revue when she was 17.

But when the reboot of Hey Hey was made in 2010, it was a shocking Red Faces skit that highlighted how ignorantly racist the show still was – a blackface act with a Michael Jackson impersonator and five backup singers. I was living in New York then and remember the deep shame of having conversations with colleagues about how something like that could occur in 2010, and of then lying awake recalling the years of taunts hurled at the elegant, globally successful Malaysian-born Tamil singer Kamahl.

In 1984, Kamahl, who had a mellifluous, treacle voice and a kind of effortlessly potent, distinguished charm, came on the show just before a career apex – an appearance at Carnegie Hall in New York, where Bob Hope was going to introduce him – when someone raced onstage and smashed white powder onto his face: “white face”.

As Kamahl wiped the dust off, good-naturedly despite the fact he later revealed he found it offensive, Hey Hey cast member John Blackman said: “You’re a real white man now, Kamahl, you know that?” It’s hard to watch.

Kamahl was also depicted as sitting in a big pot with a bone through his nose, being boiled alive as though for cannibals. And all the while, he tried to be polite, to not create a fuss.

Until Somers, back on the telly for Dancing with the Stars in 2021, said: “You probably could not get away with half the stuff you could on Hey Hey now because of the political correctness and the cancel culture. It’s a shame because showbiz does not get much of a chance.” (Does showbiz needs to be racist to have a chance?)

And, now, finally, Kamahl, spoke, ensuring we all understood what it was like to spend years enduring the embarrassing rubbish passed off as “jokes”. The show had been a “minefield for him”, he said. “There were a number of instances where I felt humiliated, but I didn’t want to raise any objections or protest about it. I kept smiling and pretending all was OK … but there were some instances that were harder to stomach than others,” he told 7.30. “It’s like losing your underpants. It’s stripping you of everything. It’s like being naked. It’s a terrible feeling.” 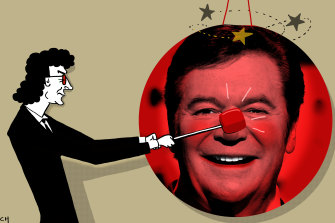 The “white face” episode was “quite offensive”, Kamahl said. “Friends of mine in America saw that and to this day, they can’t believe that somebody would treat an artist with that amount of disrespect.”

He came on Hey Hey for the exposure, but at a cost: “I volunteered, but knowing full well that there will be a downside, but never realising how offensive the downside would be. As an entertainer, if you’re not on television they think you’re dead.”

These insults leaked into Australian living rooms, landing, as they do, in the schoolyard. SBS World News presenter Janice Peterson has written about how she was taunted as a kid with Hey Hey tropes: “ooga booga”, grunting sounds and offensive cracks. “I used to wonder as a kid,” she writes, “what was so inherently, thigh-slappingly funny about the mere mention or sight of a black or brown person.”

So this has all been a bit awkward for the anti-cancel culture campaigner Somers. This week, he released a defensive statement: “I want to make it very clear that I and all members of the Hey Hey team do not condone racism in any form. I have always considered Kamahl a friend and supporter of the show, so I deeply regret any hurt felt by him as a result of anything that took place on the program in the past. Hey Hey It’s Saturday never set out to offend anybody but always strived to provide family entertainment … in the context of modern society, some material from the past is plainly inappropriate, and would not go to air today.”

The point is, it’s not about what you “set out to do”, it’s about what you actually do: white people are demonstrably, repeatedly terrible at understanding what racism is. It was surely inappropriate and offensive then, and is so now.

Kamahl, responded graciously: “Just let bygones be bygones.” He then provided the best explanation of how much of what is described as cancel culture is just common sense. He said: “I know they call it cancel culture, but they’re not stopping culture. They’re only trying to limit unnecessarily vulgar or crude terminology or gags or whatever. If something has merit, if it is witty, if it’s clever, so be it. If it’s crap, maybe we can do without it.”

Yeah, maybe we can. And so it turns out, that 50 years after Hey Hey It’s Saturday began its three-decade dominance of Australian television, the one person of the entire extended crew who can, today, inspire, warm and provoke people to think is not the one who rolled barrels or made dirty quips or banged gongs or made offensive jokes. It’s Kamahl. The one who was being subject to those jokes. The one whose Twitter bio reads: “Endeavouring to serve my fellow travellers.” The one who has powerfully demonstrated “cancel culture” is so often just about decency. The one who said this week: “The world is in need of more people with dignity, with conscience, with kindness, less greed.”

Julia Baird is a journalist and author. She hosts The Drum on ABC TV.

Opinion takes on the week’s most debated topics with views that will challenge, champion and inform your own. Coming soon, sign up now.