Parts of eastern Australia are bracing for wet weather over the coming days, with NSW residents warned the conditions could be similar to the widespread floods earlier this year.

Weatherzone meteorologist Chris Matthews said high levels of moisture in the air and water off the north-west coast of Australia had caused clouds to develop across the whole country. These conditions were expected given storm season had kicked off a few weeks ago, he said. 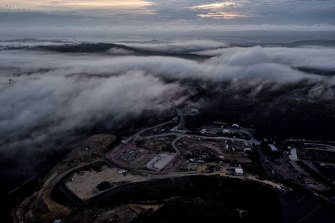 Residents in Sydney’s north woke to foggy conditions ahead of rain which will dampen much of the state over the coming days.Credit:Nick Moir

“In years gone by, we haven’t had such wet starts to the season,” Mr Matthews said. “We all remember the bushfires and there was none of these [wet conditions]. In my 20-plus years watching this stuff, this season and last season, there has been an increase in north-west cloud bands coming across central Australia and NSW.”

Large areas of inland Australia have experienced wet conditions this month, with Uluru recording more than 100 millimetres of rain in the 24 hours to 9am on Wednesday morning, an amount it hasn’t received since 2000. But regions of NSW, including the Northern Tablelands, Hunter and Mid North Coast regions are likely to see the worst of the wet weather this week.

The Bureau of Meteorology has issued a severe weather warning for those areas as a low-pressure system moves from north-eastern South Australia into NSW from Thursday, with some areas likely to see rainfall exceeding 100mm.

Conditions will gradually clear from the west of the area on Friday morning.

“The worst of it will likely be today and tomorrow, but it depends on storm activity.”

And parts of Victoria are likely to get a soaking, with Melbourne set to record between 6 and 15mm on Wednesday, while Geelong and the Mornington Peninsula are likely to see between 8 and 35mm of rain on Friday.

NSW State Emergency Service Assistant Commissioner Dean Storey said there were thousands of SES volunteers prepared to help during the wet weather, which could bring similar damage to the floods the state experienced in March this year.

“The forecast, at this point in time, suggests potential flood impacts on a scale that we haven’t seen since March this year,” he said.

Mr Storey added that residents living in flood-prone areas that were likely to be affected by the rain should prepare to evacuate if required.

“Know where you would go if you have alternative locations and friends and family you can travel to and stay with and follow the advice from the local authorities if you are asked to evacuate,” he said.

Bureau of Meteorology NSW and ACT manager of weather services Jane Golding said parts of the state could record more rain in the next three days than their November averages.

The wet conditions are expected to continue throughout the warmer months after the bureau reiterated its La Nina alert on Wednesday, meaning there is a 70 per cent chance of the event occurring in the coming months. However, atmospheric and oceanic observations have yet to consistently reach La Niña levels.

While the Bureau of Meteorology has indicated a La Nina event is likely this year, it will still be a while before they can say the event will definitely occur.

Get weekday updates on the climate summit that will shape our future. Sign up to our COP26 newsletter here.