The chairman and chief executive of the Sydney Cricket and Sports Ground Trust say the organisation is fighting to remain solvent after the shutdown of sport due to COVID-19, urging people to retain memberships but admitting the situation is so dire it is not in a position to offer refunds.

While Australia’s football codes feel the strain from their competitions being suspended indefinitely, venues reliant on sport are facing similar challenges. 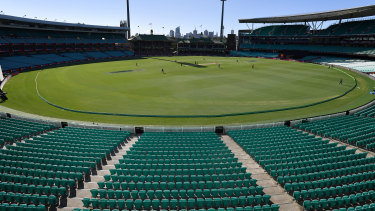 The empty stands during the ODI between Australia and New Zealand in Sydney on March 13.Credit:AAP

“In this desperate situation we want to see each SCG member maintain their membership in the months ahead. We cannot offer you access to the ground or the matches you would normally expect.

“We have worked closely with our full-time staff to implement far-reaching cost savings to ensure our solvency and we have achieved much as the crisis has escalated.”

Usually a hive of activity, the SCG has not hosted any sport since March 13 when Australia played New Zealand in the first of two one-day cricket internationals due to be staged at the venue in the space of three days. It was played in eerie surrounds, with no spectators allowed into the ground. The second game was cancelled.

Had the coronavirus outbreak not struck, the SCG would have hosted its first AFL match of the season last Friday when the Sydney Swans were supposed to take on Essendon.

Shepherd and Mather told members the SCG's predicament was such that they were unable to consider refunds.

“A small number of you have written seeking advice on refunds and we simply cannot answer this at the moment given the complexity of our current financial position and the absolute need to keep the SCG functioning as it has since the 1850s,” they wrote.

“We don’t have all the answers and what we know today will almost certainly change tomorrow.”

Construction has yet to begin on the $800 million football stadium at Moore Park but the SCG is "working with Infrastructure NSW and the John Holland Group given the Sydney Football Stadium’s status as a priority project for the state."