It begins on an island. A desperate woman with an ancient machete is stalking a man with a gun. There’s a crow with a “skeptical yellow eye” watching from the branch of a “lightning-struck eucalyptus tree” while a great white shark with a scarred dorsal fin surfaces in the bay. And then she steps on a piece of broken glass.

Welcome to Adrian McKinty’s gothic Australian nightmare with its echoes of Wake in Fright via Mad Max with a soupçon of Deliverance and a hillbillyesque family headed by a matriarch who could well be related to Mags Bennett in the TV adaptation of Elmore Leonard’s Justified. 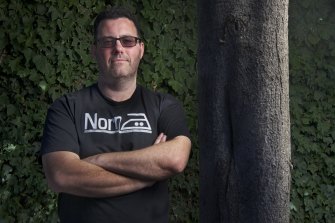 Adrian McKinty has promised more of his Sean Duffy novels set during the Troubles in Northern Island.Credit:Simon O’Dwyer

It’s always a joy spotting the cultural references in McKinty’s multi-layered crime fiction, especially when he goes off at a tangent (as he does so often in the wonderful Sean Duffy series) to discuss some piece of rock trivia or argue the case for a (least) favourite album. Or, in the case of The Island, by providing one of the minor characters with a convincing back story as a Sex Pistols fan.

The Island, however, has much more in common with McKinty’s breakthrough thriller, The Chain, than with the Duffy series, though one can only hope it encourages readers who haven’t yet had the pleasure to seek out the latter. Set against the background of the Troubles in Belfast during the ’80s, the Duffy books have won umpteen awards and McKinty says there are more books on the way. Even though, as McKinty himself has ruefully observed, they haven’t made enough to pay the rent, yet.

Like The Chain, The Island is a thriller with a central female character who discovers just what she is made of when her family comes under threat. This is a smart move in an era when women are taking centre stage in politics and the arts as well as in superhero movies, while the avid readership for crime fiction skews significantly female (judging by the attendance at writers’ festivals). So mild-mannered Heather, a massage therapist from Seattle, comes into her own as an unlikely action hero desperate to protect her two step-children from the fury that ensues. 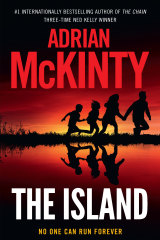 The set-up is brisk. Tom is a well-regarded American doctor due to present a keynote at a conference in Melbourne. He is accompanied by Heather, his new wife, who is significantly younger than him, and his two children from his first marriage who are dosed up on Ritalin and anti-depressants following the death of their mother a year earlier. On a daytrip in search of koalas, the family take a ferry to an island just off the Mornington Peninsula, where Tom accidently runs over a young woman on a bike. After trying to conceal the body, the family are prevented from leaving by members of the resident family demanding revenge. In the resulting fracas, Tom is stabbed and Heather and the children go on the run.

What follows is a murderous game of hide and seek across inhospitable terrain under a relentless sun. The fact that the already damaged Olivia and Owen don’t even like Heather is a nice complication. As in the best thrillers, there’s danger at every turn as presented by the vengeful O’Neill family or the “deadly” native faunae. There are also moments of sheer horror that derive from McKinty’s affection for the “video nasties” of the ’80s such as the female rape revenge movie, I Spit on Your Grave. As it happens, Heather is the daughter of a traumatised war veteran who has taught her a range of survival skills that will come in very handy.

Even more intriguing is a narrative thread that addresses the ownership of country. This begins with Heather’s chance meeting with an Indigenous elder outside Alice Springs who presents her with a beautiful pocket knife, and her subsequent discovery of the Indigenous history of the island. Just how these encounters will be of assistance to both her and the children is the story you have to read. The Island is a breathless and confronting ride.

The Island by Adrian McKinty is published by Hachette, $32.99.

The Booklist is a weekly newsletter for book lovers from books editor Jason Steger. Get it delivered every Friday.