A savvy pet owner has built his Staffordshire Bull Terrier the kennel of dreams – and the project cost him nothing at all.

Ben Warr-Barnes, 41, from Cheshire, built Pixie an amazing new house using recycled materials – including everything from leftover tiles to an old dining table.

‘I came up with the idea because the old shed that doubled up as a dog kennel was old and an eye sore,’ the dad-of-two said, speaking to money-saving community LatestDeals.co.uk.

‘Going from working 40 plus hours a week as a window installer to doing nothing, I needed something to do with what I had already around in the van and old shed. 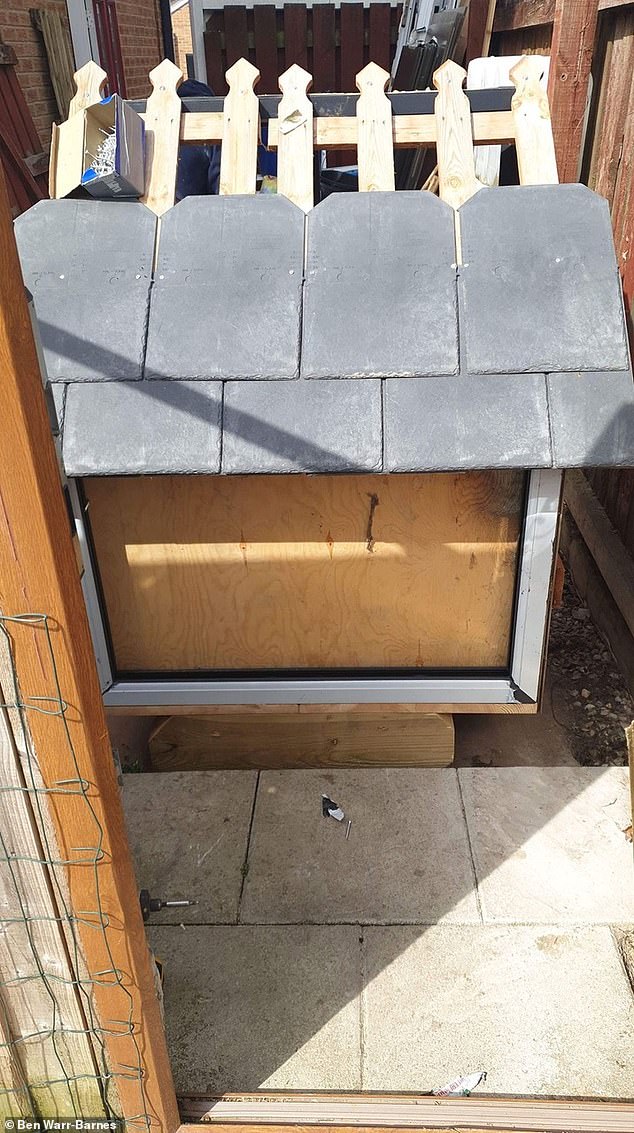 Ben Warr-Barnes, 41, from Cheshire, has built his Staffie Pixie the kennel of dreams under lockdown for free. Pictured, before the transformation

The dad-of-two says he came up with the idea because the old shed that doubled up as a dog kennel was old and an eye sore. Pictured, after the transformation

Ben went on to explain that the kennel continued to evolve as he built it.

‘The floor, or base, is an old dining table raised up on sleeper offcuts to keep it away from rain and damp,’ he said.

‘The structure is old UPVC window frames without the glass. The inside was plywood lined again from offcuts from past jobs.

‘Then, for the outside, I cladded with feather edge cladding left over from a fence repair.

‘The roof is Tapco tiles that were spare from the last conservatory roof conversion I did for work.’

The roof is made from Tapco tiles that Ben had spare from the last conservatory roof conversion he did work for. Pictured, Pixie in her new kennel

The floor, or base, is made from an old dining table raised up on sleeper offcuts to keep it away from rain and damp. Pictured, during the transformation

Ben admits the project turned out better than he thought it would, and Pixie (pictured) is delighted with her new kennel

Ben says a project like this is an ideal way to pass the time under lockdown.

‘I think it turned out better than I thought it would,’ he added. ‘I enjoyed doing it and think it helped me cope with staying home because I’m usually an active person so to go to doing nothing is hard.

‘For anyone wanting to do it, I just say have a go. Instead of old window you could use pallets for the structure and for the roof you could just use roofing felt, as long as it’s solid and waterproof.

‘It cost me nothing as I already had the stuff – and Pixie loves her new house!’

Tom Church, co-founder of LatestDeals.co.uk commented: ‘Those of us with pets will know how much we love them and would do anything to spoil them – but Pixie is luckier than most, as she got a whole bespoke house made for her!

‘Best of all, the house cost her owner nothing to make, as Ben was creative with the materials he used – if you’re looking to do a lockdown DIY project too, look around your home for leftover bits you can already use to keep the costs down.’

Ben cladded with kennel with feather edge cladding which he had left over from a fence repair. Pictured, during the transformation