As U.S. businesses reopen, worried workers and their advocates are borrowing a legal strategy commonly used to shut down rowdy topless bars to try and force employers to strengthen protection against further spread of the coronavirus.

Workers and their families at McDonald's Corp's Chicago restaurants have filed a class-action lawsuit against the fast-food chain that does not seek money for sick staff, but compliance with health guidance such as providing clean face masks.

The strategy was unsuccessful against a meatpacking plant but experts said it could work against McDonald's and other companies, and a business group warned about a flood of cases.

"The damage done by inadequate safety practices is not confined to the walls of a restaurant but instead has broader public health consequences," Tuesday's lawsuit said.

Like an April lawsuit against a meatpacking plant, the case targets McDonald's as a public nuisance, a legal strategy previously used to shutter strip clubs and the famed Limelight nightclub in Manhattan.

Typically, workplace safety is a matter for the federal Occupational Safety and Health Administration (OSHA), which has the authority to inspect businesses and issue citations. By focusing on community health, the lawsuit attempts to move outside OSHA's jurisdiction and into the courts.

McDonald's workers around the country have protested and demanded safety gear.

In Chicago, workers filed at least four complaints with OSHA, but the agency declined to inspect work sites, according to the lawsuit.

OSHA did not immediately respond to a request for comment. Unions have criticized the agency for lax enforcement and failing to issue mandatory standards for businesses to stem the spread of COVID-19.

"When you don't have an assertive OSHA you get these creative approaches," said Michael Duff, a professor at the University of Wyoming College of Law.

McDonald's called the allegations inaccurate. The company criticized the SEIU service union that is supporting the plaintiffs and said the chain has issued a 59-page guide its restaurants must follow to protect staff and customers. 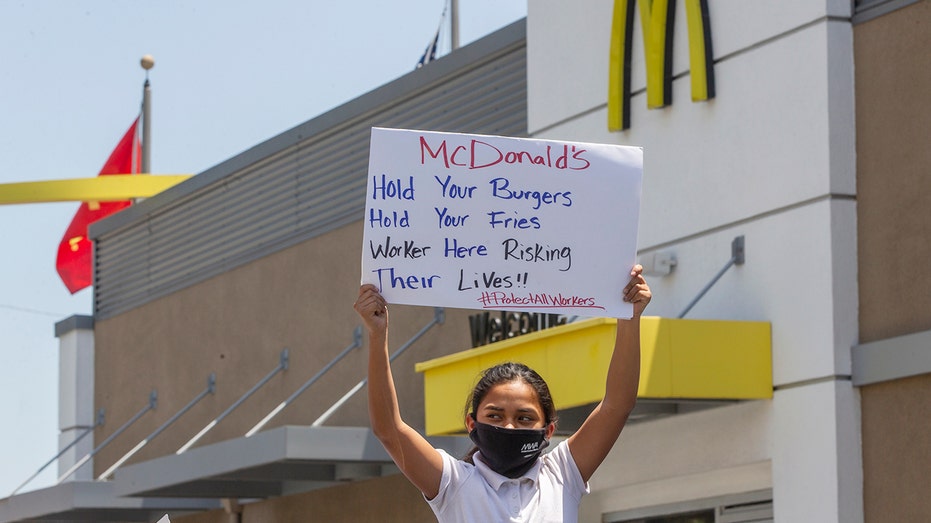 Ana Escobar, 11, peeks out of her father’s vehicle during a motor march by striking McDonald’s workers in Los Angeles, California, on May 20, 2020. (AP Photo/Damian Dovarganes)

The Fight for $15 group, which campaigns to raise the U.S. minimum wage to $15 an hour, is also helping the workers.

OSHA has said it is investigating thousands of complaints nationwide and that flexible guidance is better than rigid standards.

The public nuisance doctrine stems from medieval England, where it was used to promote safer roads and to fight infectious diseases.

To prevail, plaintiffs must prove a defendant interfered with a public good, like the community's health. Unlike a typical lawsuit, it does not generally require proof that the defendant directly injured someone.

Rather than prove someone was infected with the coronavirus at McDonald's, the workers must instead show the company created an unsafe workplace that posed an imminent threat of contributing to its spread.

A similar public nuisance lawsuit filed in April against a Smithfield Foods Inc meat processing plant in Missouri was dismissed because the judge said workplace safety was a matter for OSHA.

But Smithfield was already being investigated by OSHA and unlike McDonald's, there were no confirmed COVID-19 cases in the Missouri plant.

The Institute for Legal Reform, an affiliate of the U.S. Chamber of Commerce business group, has warned the pandemic could prompt a flood of "abusive" lawsuits, and cited the McDonald's public nuisance case in a call with reporters this week.

"The danger is one case survives and like moths to light you'll see cases all over the place," said Michelle Richards, a law professor at the University of Detroit Mercy.

Richard Ausness, a professor at the University of Kentucky College of Law, downplayed the risk of a flood of cases, but said the mere filing of such a lawsuit could push a business to help its workers.

"Who wants to be accused of maintaining a public nuisance? It just sounds awful," he said.