Missouri Representative-elect Cori Bush made her debut in Congress on Friday but said her Republican colleagues called her “Breonna,” assuming that was her name because she was wearing a mask with Breonna Taylor’s name on it. Taylor, 26, was killed by Kentucky police in March in a case that fueled nationwide protests against police brutality.

“A few of my Republican colleagues have called me Breonna, assuming that’s my name. It hurts. But I’m glad they’ll come to know her name & story because of my presence here,” Bush tweeted. “Breonna must be central to our work in Congress.”

It’s Day One, so I’m wearing my “Breonna Taylor” mask.

A few of my Republican colleagues have called me Breonna, assuming that’s my name.

It hurts. But I’m glad they’ll come to know her name & story because of my presence here.

Breonna must be central to our work in Congress.

When asked about her tweet, Bush told reporters Friday that the comments from her colleagues were “disheartening” and “hurtful,” saying she was called “Breonna” several times.”This has been national news for a long time. People have protested in the streets with this name and it just saddens me that people that want to be in leadership don’t know the struggles that are happening to Black people in this country.”

“But it’s okay because we’ll educate and we’ll make sure that people know who she is,  what she stood for,” Bush added. “That she was an award-winning EMT, you know, in her community, that she was someone who deserves justice right now.” 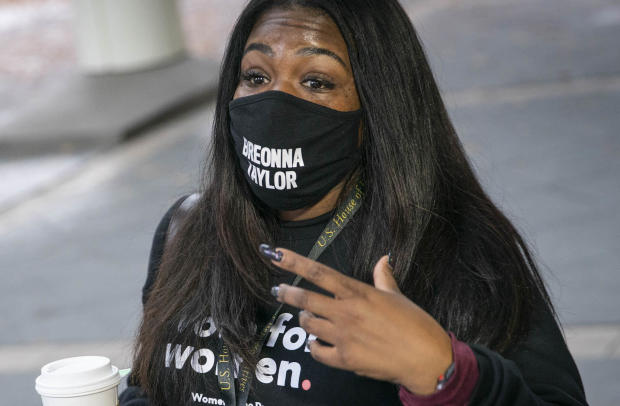 The city of Louisville in September settled a wrongful death lawsuit with Taylor’s family. The settlement included a $12 million payout along with several measures for police reform. None of the officers involved in the shooting at her home were charged directly in her death. One officer, however, was charged with endangering her neighbors after officials said he fired shots into Taylor’s apartment from outside.

Bush on Friday said she hopes to make “real change” and shared what her first day in office means to her. “I’m the first Black congresswoman to represent my state,” she said, “that’s huge and that opens up the door for so many others.”