The dream ticket: Travel is stuck in the sidings for now – but when the world’s back on track, there’s no greater train ride than aboard the glorious Canadian

Over a poached egg in the grand old railway hotel Fairmont Royal York, it all started up. ‘Oh, it’s snowing, alright,’ our waiter told us.

‘How lovely,’ we replied, looking forward to a light dusting of icy crystals. By the time we got onto the Toronto streets, we were wading through waist-high drifts.

Airports closed. Buses groped past. On the TV news, we watched cars slither into each other. 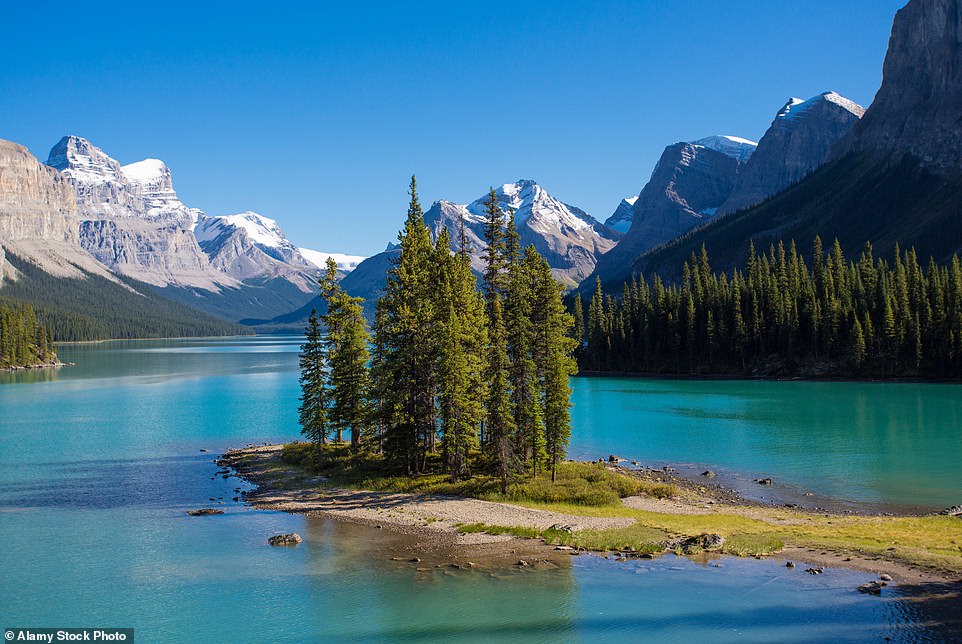 Griff Rhys Jones travelled on the cross-continental train, The Canadian, with stops at Edmonton, Winnipeg and Jasper. Pictured is Jasper National Park in Alberta

Nonetheless, the next day, our cross-continental train The Canadian — heading nearly 3,000 miles to Vancouver through conditions that would have halted Southern Railway in its tracks — left the station exactly on time.

Our train attendant was called Cal. He rattled off the attractions of the stainless steel streamlined tube that would carry us across the continent. ‘Two domed carriages behind you. Dining cars ahead.’

The trip, with stops at Edmonton, Winnipeg and Jasper would take four days and four nights across five of Canada’s six time zones. I venture that once we get through the terrible current health crisis, this journey should be high on people’s wish-lists.

Cal had worked on our train most of his life and this, he said, was proper winter. White streaks of driving snow were falling on the undistinguished suburbs of the most populous area of Ontario, as yellow reeds, black skeletal trees and clumps of red dogwood slid by.

Our grey and silver Sleeper Plus cabin had two chairs, a built-in sink and a door to our own loo. The shower was down the corridor.

Frankly, the ambience was a little military dental surgery and lacked the warm satinwood cabin-cosiness of, say, Australian sleepers. But I got to like our little practical prairie home on the rails. Our cross‑continental trip turned out to be a slight misnomer. There’s no direct rail link from coast to coast. Were you to start off in Halifax, Nova Scotia, on the eastern seaboard, you would have a train journey of more than 1,000 miles before you could board a transcontinental service in Toronto. 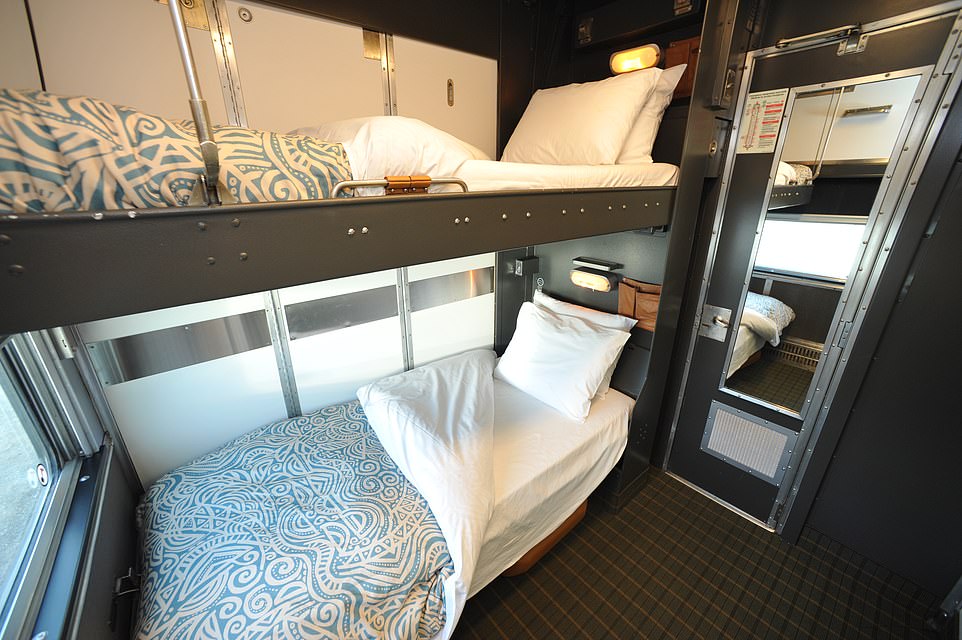 One-up, one-down: A cabin aboard The Canadian. Griff said the ambience was ‘a little military dental surgery’ 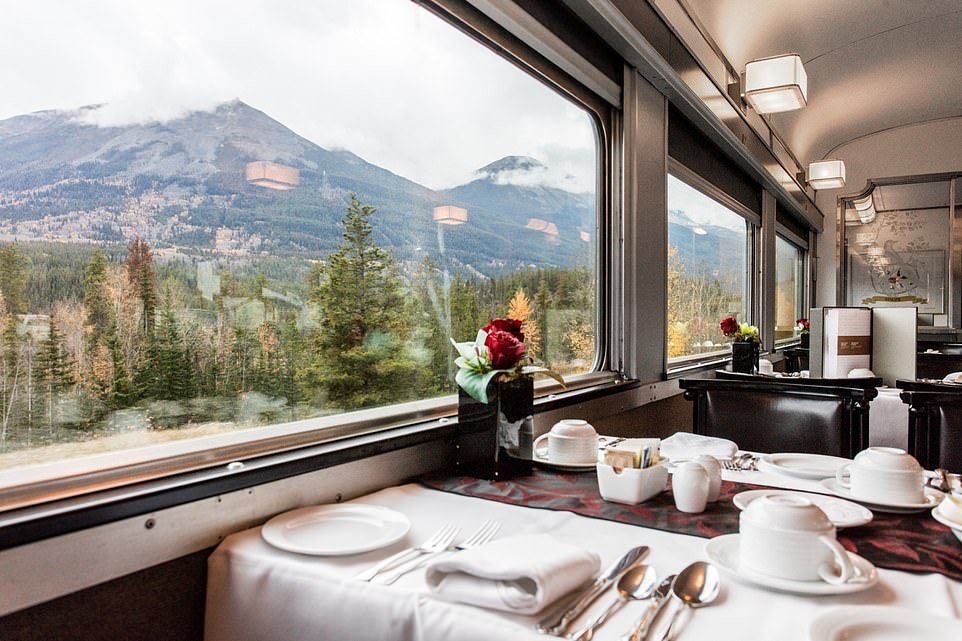 Growling stomach: ‘The food wasn’t great, the views were’ said Griff. Pictured is the dining car

HOP ON AND OFF THE CANADA EXPRESS

The Canadian, running since the 1950s, carries domestic passengers, who hop on and off, plus tourists like us. I had brought along a hefty history of the Canadian railways, a tale of derring-do, inspired entrepreneurs and far‑ sighted politicians who endured setbacks, wars, slumps and mergers to create this marvel of a railway system. A riveting subject, but I tended to prefer the view.

With plenty of time for reflection, our train became a monastery of the soul. The food was a trifle Cistercian, too. People told us: ‘It’s great food!’ It’s not. It’s averagely alright. The coffee was grim. But, hey, it made us feel like proper travellers.

I have never seen a train with such a bewildering variety of accommodation. Some carriages had curtains hiding bunk beds; others had panelled grey walls or padded benches. And they were linked by frightening, noisy, steel, open intersections where ice drifts formed among the caterpillar conduits.

Corridors led us to the viewing dome, which revealed a long train roof stretching into the distance, on which I half expected an action-movie hero to appear and start slugging it out with a baddie.

Mrs Jones slipped her arm around me and rested her head upon my puny chest. Good gracious! We were in danger of becoming an advert for senior travel. But this sort of journey is, indeed, bonding for older married couples: clambering over each other to get into bed, helping each other with socks, sharing ear plugs.

We stopped for a while at a station called Capreol in Ontario. I poked my head out and frosted my moustache.

The smokers from economy were laughing at the cold. ‘Wait ’til Edmonton,’ said the big guy with long hair and longer beard. ‘My friend says it’s -40c.’

T he engine hummed. The sun dropped. We paused for 15 minutes then rushed on into total darkness. A tree of red signal-lights reflecting off the grooved steel roof slithered towards us in the dome, and then it was black. No stars. No moon.

I sleep well on trains. Particularly on this one. A rumble. The odd rattle. A wide bunk and clean sheets. I dreamed of toy tractors and woke at 5am.

Outside the trees had grown distinctly more pointed. We were further north and west. Not a scintilla of warmth. But I was cosy. I undressed. As we pulled into the township of Armstrong, still in Ontario, I was standing buck-naked at the window.

After brunch I contemplated how many rivers, lakes and boathouses there were. I marvelled at the tenacity of the original First Nation and French trappers, crossing Canada by canoe. 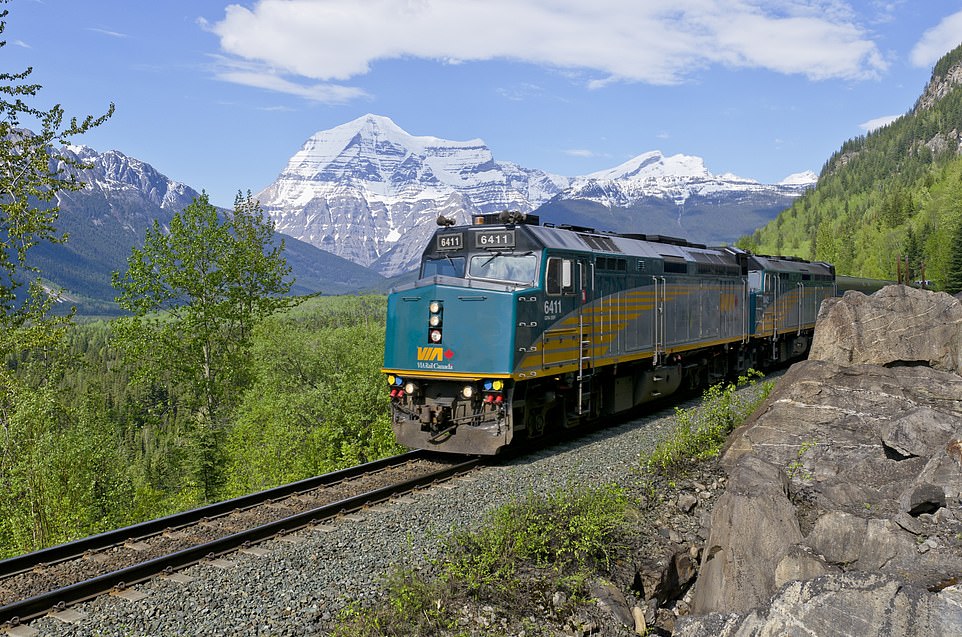 The Canadian, running since the 1950s, carries domestic passengers, who hop on and off, plus tourists

The Indian Pacific covers 2,700 miles and takes about 75 hours between Sydney and Perth in Australia. You cover endless Outback and are sure to see kangaroos. From £915pp with cabin, food and drinks (journeybeyondrail.com.au).

It’s nearly 6,000 miles on the Trans-Siberian Express from Moscow to Vladivostok. The jolly dining carriages serve delicious borscht soup, chicken stew and, of course, plenty of vodka. From £765 for a second-class cabin (realrussia.co.uk).

Jump on an Amtrak train and see the U.S. from the perspective of the pioneers as they headed west across the plains and between mountains. There are so many wonderful options, including the Lake Shore Limited service from New York’s Penn Station to Chicago. See amtrak.com for prices.

ALL ABOARD IN INDIA

There are more the 68,000 miles of tracks in India. The longest single ride is a bone-rattling 2,646 miles, from Dibrugarh in Assam to Kanyakumari in Tamil Nadu. It takes 79 hours and involves 58 stops. Visit transindus.co.uk.

Catch a no-frills flight to Lviv and board the ten-hour sleeper between that city in the west of Ukraine, and Odessa on the Black Sea. You will cover 463 miles across some of the most bleakly beautiful terrain in Europe. Go first-class to live it up a bit (from £36, uz.gov.uauz.gov.ua).

A day out of Toronto, we crossed the great plains of Manitoba. Snow billowed.

A potash mine wafted a colossal plume of steam into the dazzling sunshine. And little farms slid past. Maybe a raspberry red barn. Or a tin house. Or a single green shed — each photo opportunity highlighted by swathes of snow. A line of black fence posts. A field of white, brushed to a shade of lemon by the corn stubble poking through the drifts.

On day three, we crept into Winnipeg, capital of Manitoba, at dusk. When Canada was younger, our transcontinental train would have been the only way to reach this lonely outpost. The railway line dates from the 1880s. 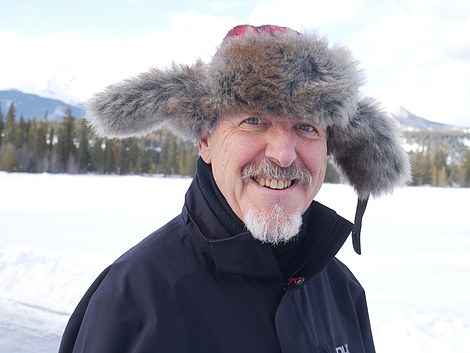 People fly into Winnipeg now. But I felt like I had a personal relationship with the vastness of this country which flying could never offer.

Stopping for three hours, we got down to have supper in town and the cold nearly knocked my nose off. It was -30c.

Travelling in winter meant most wildlife was hibernating — including the grizzlies. We saw an elk. Or was it a caribou? Or a white-tailed deer? Hard to say. We learned that wolves are said to push their prey into the path of the train.

Next morning, I woke as we neared the farming town of Melville. Grain elevators rose like Lincolnshire cathedrals. I skittered down the corridor in a towel, like Marilyn Monroe in Some Like It Hot. The guard said: ‘Good morning, folks.’

Well, it was folksy. The city of Medicine Hat was close, for goodness’ sake. We were now in the province of Saskatchewan and rolled right through its snowy wastes of gently undulating fields and woodland for hour after hour, halting momentarily in Saskatoon, a city only twice as old as me, and the largest in the state.

The Queen has been to Saskatoon at least six times and is regarded as a regular visitor. 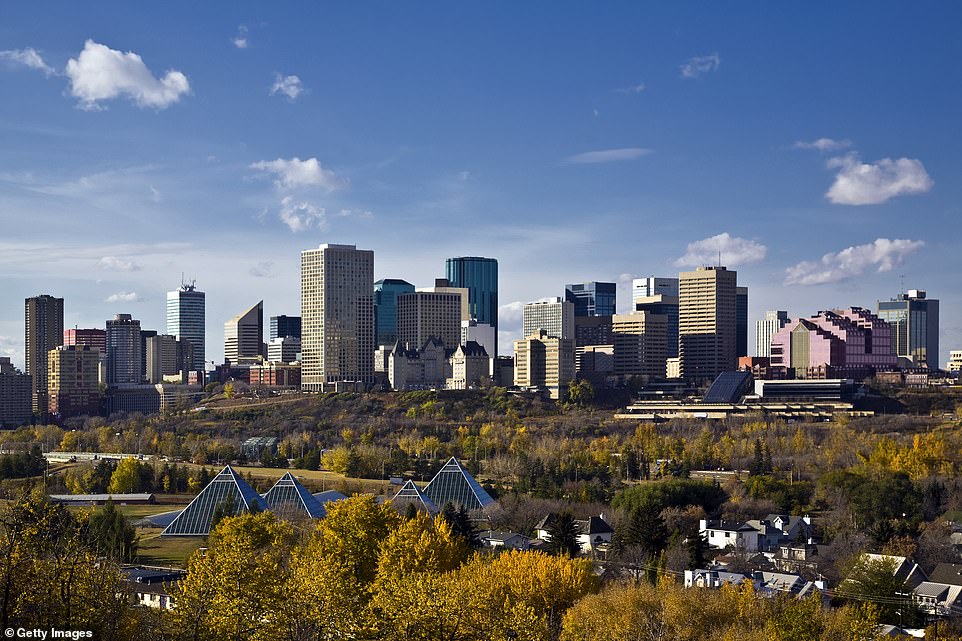 The Canadian normally departs twice a week from Toronto to Vancouver (on Wednesdays and Sundays) and in the opposite direction on Mondays and Fridays. Pictured is Edmonton, which is one of the stops 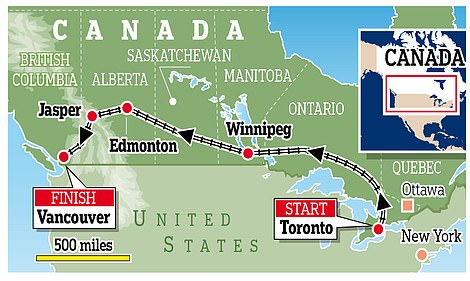 Our plan was to alight at Jasper, on the edge of the Rockies, for a mountain break. We would be skiing in powder. Three days later we rejoined the service.

After Jasper, the train climbed into the Rockies via the Yellowhead Pass. The sky was overcast. It sat just above us like a dull ceiling to a colourless majesty of mountains. The Victoria Cross Ranges rose up in domed humps. Wraiths of grey mist hung in long streaks on its sides. Black trees. Snow peaks. A sprinkling of sugar. The Rockies are as much a lateral as a vertical landscape. Close to the track were bare, arched maples. On the valley floor were pristine white slews of frozen lake.

It was majestic, yes, but samey, too: trees and lakes followed by more trees and lakes. I am ashamed to say we suffered from ‘majesty exhaustion’ in the Rockies; just too many soaring peaks.

We ate that evening, as we always did, at an allocated table where we would be joined by another couple, making polite conversation with travellers from as far away as Hong Kong and New Zealand. 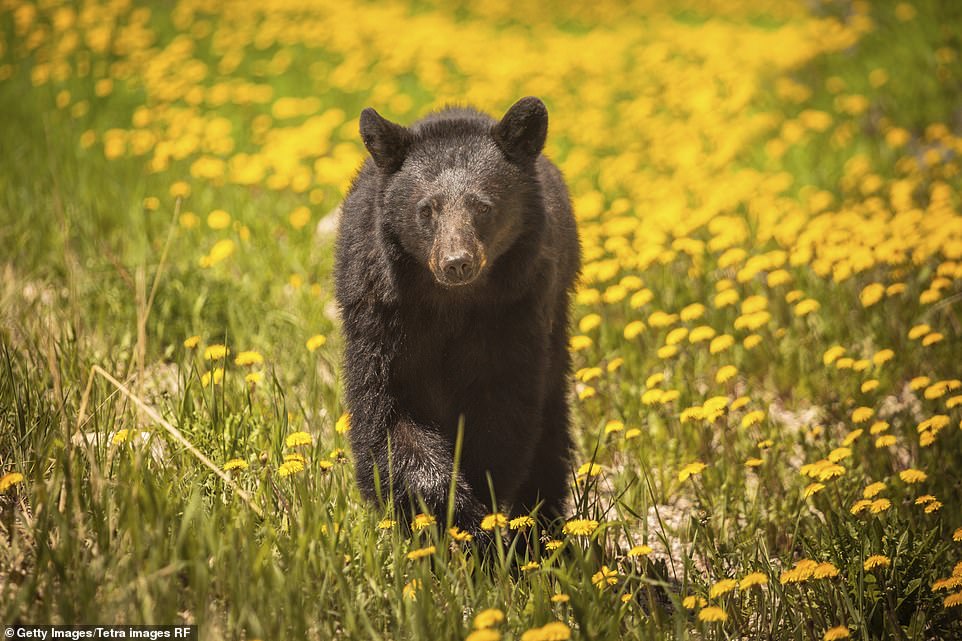 There are ample opportunities to spot wildlife as you glide along, including deer, moose, mountain goats and even bears

Old hands now, we could lecture new arrivals on board on the lack of storage. How they should have brought snacks and bottled water. How the little boxes contained ear plugs to be rammed in at night.

Put Vancouver out of your mind, we said. Rest, gaze at the passing frozen emptiness, the undulating stands of forest and get excited about a hut or a snowmobile track. Marvel at how warm you are and how cold it looks out there. Read.

Mind you, if you can concentrate on a book while the wonder of the natural world is passing by, then hats off to you. My history of the railway remained firmly shut.

Better to enjoy that wonder than ponder how it all came to be. Take it from me.

Griff Rhys Jones travelled on The Canadian from Toronto to Vancouver, stopping at Jasper. Prices for a Sleeper Plus Cabin for one or two people start at $2,122pp (£1,234). The train runs twice weekly in both directions. Due to the coronavirus, the service is currently suspended until May 1. viarail.ca More information from Destination Canada, explore-canada.co.uk; Fairmont Hotels, fairmont.com; Ski Marmot Basin, skimarmot.com.