He did not do the things of which he is accused in the summer of 1988. 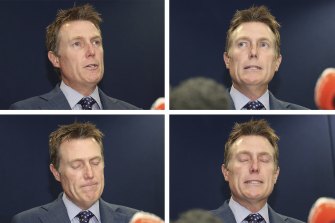 Attorney-General Christian Porter speaking at a press conference in Perth on Wednesday.Credit:Trevor Collens

He began by addressing the family of his accuser, a 49-year old Adelaide woman who died by suicide last year.

“You have suffered a terrible loss, and you did not deserve the frenzied politicisation of the circumstances of your daughter’s death,” he said. “I hope that…you will understand…that the things that are being claimed to have happened did not happen, that I did not mean to impose anything more upon your grief.”

Mr Porter said he had known the woman when he was 17 and she was about 16, and they had been champion debaters together. He did not know her well.

At times close to breaking down, Mr Porter said that prior to the story of the rape allegation breaking on the ABC last Friday, no one in the police, politics or the media had put “any substance of any specific allegations to me”.

He had not read the statement written by the woman detailing her account of Porter’s alleged attack on her.

But, he said, “nothing in the allegations that have been printed ever happened”.

He had not raped the woman who accused him.

He had not had a sexual encounter with her, nor a relationship.

“I have been subject to the most wild, intense and unrestrained series of accusations I can remember, in modern Australian politics” he said, with some bitterness. “Maybe that’s the new normal; I hope for everyone’s sake, it’s not.”

If he were to resign as Attorney-General, he said, it would set a dangerous precedent.

“Every child we raise can have their lives destroyed by online reporting of accusations alone.”

But he would take a leave of absence to care for his mental health. It was obvious watching the press conference that he was distressed and stressed.

When pressed on the detail of his friendship with his accuser, Mr Porter said he remembered her as a bright and happy person.

He thought they might have gone out dancing in Sydney, as she alleged in the unsworn, informal statement she made detailing her allegations.

In the statement, the woman said she ironed a shirt for Mr Porter before a formal dinner on the night of his alleged attack on her.

According to the woman’s statement, he told her she “would make someone a wonderful wife one day”.

This had jogged a memory, he said.

“I did read that as part of the material, and I recall, it sparked a memory, there were four of us, three boys….I don’t think any of us had ever ironed a shirt, and I recall, she showed us how to do it, I remember that,” he told reporters.

Had he commented about her making a good wife?

“I don’t remember that specifically, but it is not impossible that that was said.”

Reaction online was swift and on Twitter, at least, seemed negatively skewed against the Attorney-General. Many female commentators tweeted they were watching the press conference with their hearts in their mouth. For them it was more personal.

An independent inquiry has been called for but no trial can take place.

But that doesn’t mean people watching this extraordinary, historical press conference didn’t make up their own minds one way or the other.