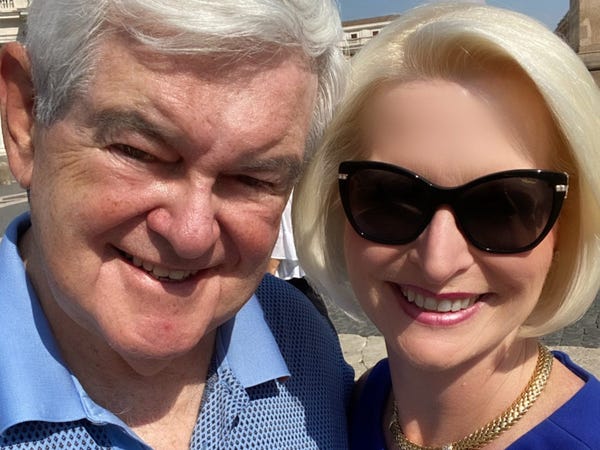 Callista Gingrich, a diplomat, author, and wife of former Speaker of the House Newt Gingrich, is joining the ever-expanding club of public figures who have been ridiculed online for their less-than-seamless photo editing.

On Saturday, Gingrich took to Twitter and shared a selfie in which she posed next to her husband.

"@newtgingrich and I wish you a lovely weekend!" she captioned the photo.

Commenters noticed that the photo had been altered, enlarging it to reveal clear marks of a photo blurring, including distortion the goes into the hairline and a clear demarcation where natural shine and shadows on the forehead end bluntly.

The blurring on the forehead appeared to come from a common photo editing tool like FaceTune or a similar app.

Most found Gingrich's obvious editing to be funny, considering her husband wasn't given the same treatment.

"Couldn't give Newt any FaceTune love???" one Twitter user quipped.

Twitter user @a_goddamned_guy poked fun at the heavy editing by offering their own retouched version of the photo — and asking Gingrich for a job.

Twitter user @nitecrawler_305 went in a slightly different direction, sharing a FaceTuned photo of Yoda, which racked up over 10,000 likes.

The post made its way into celebrity circles as well.

Chrissy also weighed in on the catastrophic and uneven editing by sharing her "improved" version of the photo, joking, "get u a girl who will Facetune u both."

This is not the first time that Twitter users have pointed out Gingrich's photo editing.

In May, TV writer Tyler Dinucci retweeted another heavily-edited photo that Gingrich posted to Twitter.

"I wish I loved anything as much s Callista Gingrich loves FaceTune," he quipped.

Gingrich's experimentation with photo editing may have begun as early as 2018, when she posted a heavily-edited photo for her anniversary.

Happy Anniversary to my husband, Newt!❤️

The post, in which Gingrich and her husband appear to have perfectly smooth faces, sparked several comments questioning her photo editing methods.

Gingrich has not appeared to comment publicly on the discourse surrounding editing choices.