Britain at its best: Exploring the Llyn Peninsula, a coastal corner steeped in classic Celtic culture

Our view from the ancient church of St Hywyn in the former fishing village of Aberdaron in north-west Wales is striking.

So much so that, as the wind gusts through the churchyard, with gravestones scattered like broken teeth across the hillside, it feels as if we should have needed to toil harder and climb farther to be rewarded with such scenery.

Just below, an impossibly golden beach fringes the surf as seagulls wheel and cry overhead. In the distance, the grassy headland promises miles of lung-busting paths, full of wild flowers. Yet the church’s location is anything but remote, as it lies right in the heart of Aberdaron. 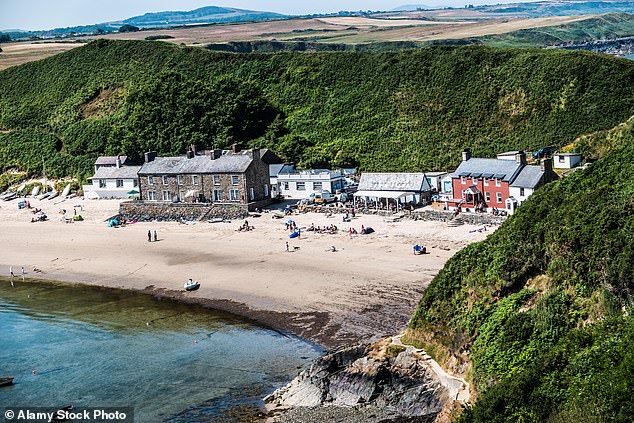 The village sits on the western tip of the Llyn peninsula — a 30-mile spit of land known as the Land’s End of North Wales or Snowdon’s arm — which points into the Irish Sea.

From our home in Manchester, it takes three hours to get here. But the drive is worth it, especially as the area’s microclimate — thank you, Gulf Stream — means the weather is often pleasant even when the rest of Wales is whipped by wind and rain.

There are plenty of self-catering cottages here, but we prefer the cosy Gwesty Ty Newydd Hotel overlooking the bay. Opt for a front-facing room and listen to the splashy surf beneath your window as lilting Welsh voices drift up from the bar and terrace.

Indeed, everywhere you go you feel the thrum of Celtic history, and more than 70 per cent of the Llyn’s population of 6,000 speak Welsh as their first language.

A place of Christian worship for 1,500 years, it was in Aberdaron that pilgrims stopped to rest on the way to the holy island of Ynys Enlli (Bardsey Island). Its cafe, Y Gegin Fawr — where we enjoy hot chocolate and bara brith (Welsh tea loaf) — was once an inn where they stayed.

As for Bardsey Island — just two miles long and less than a mile wide — these days it’s a magnet for a different kind of pilgrim. Namely, burnt-out city dwellers who book into one of its Grade II-listed homes (of the 12 properties on the island, nine are holiday lettings) to get away from cars, shops, electricity, and other such modern horrors.

Boat trips set out from a small cove, and we watch those off to ‘get away from it all’ pile wine and Waitrose chickens on to their boat. 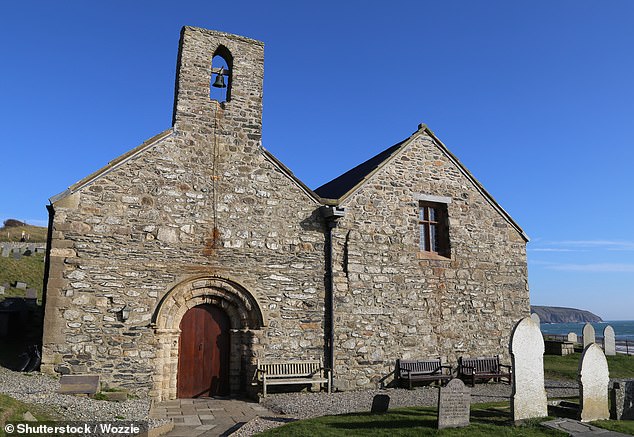 It’s easier to get away from it all in places such as Pistyll, a village about 15 miles from Aberdaron, where there’s a tiny 6th-century church in a grassy valley, and the nearby sandy bay of Porth Nefyn. Aberdaron itself is the ideal place to start countless historic excursions — including to the Neolithic axe factory on Mynydd Rhiw, and Iron Age hillforts, such as Tre’r Ceiri.

Aberdaron is also home to the Porth y Swnt visitor centre, which offers a perfect introduction to the Llyn’s history and culture.

Walking routes are irresistible, thanks to 100 miles of coastline. One day we take on the steep slope to the beach of Whistling Sands (the English name for Porthor), so called because of the whistle produced by the oddly shaped sand particles rubbing together underfoot.

As we sit at the beach cafe gazing at the surf, it feels like we’re on a Greek island at the end of the season. It makes me wonder why so many flock to the nearby fashionable resort of Abersoch (a favourite with the Cheshire set).

We also take a 25-minute drive to Porth Neigwl, the magical vast bay known in English as Hell’s Mouth, on the south coast of the peninsula.

My heart breaks to leave this place of calm. The only certainty — like the enduring presence of St Hywyn’s church — is that we’ll be back.