Beyonce, the master of the visual album, just keeps getting better with each release. Using the music from The Gift, the album she released last year to accompany the live-action remake of The Lion King, the star stuns again with the spellbinding Black Is King. 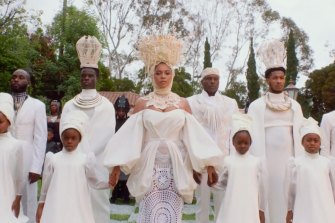 Beyonce in a scene from her new visual album Black Is King.Credit:Disney

It’s a sumptuous visual feast, from detailed costuming to choreography. Filmed around the world, including in New York, Los Angeles, South Africa and Belgium, the film takes the viewer on a dazzling, hyper-real ride through natural landscapes and space-age futures, while incorporating elements of black history and tradition.

Black Is King transposes the classic Disney coming of age story The Lion King to a modern political context, turning the tale of Simba’s journey towards selfhood into a bold statement about the power of black identity. Though some sections incorporating dialogue feel a little clunky, the parallel generally works well, as we see the young king moving from exile to self-acceptance, and eventually a joyful celebration of community.

Brown Skin Girl is especially moving, showing Beyonce, Rowland and Blue Ivy together in a strong visual affirmation of generational black womanhood. Though the film doesn’t explicitly call itself feminist, there’s a real feeling of female empowerment throughout, with a voiceover stating, “Many times, it's the women that reassemble us. Men taught me some things, but women taught me a whole lot more."

With the resurgence of the Black Lives Matter movement this year, Black Is King is a timely, powerful declaration of pride. “Let Black be synonymous with glory,” she says – and may the world sit up and listen.