Australia is negotiating new measures to help the Ukraine government defend itself against a wave of cyber attacks while Russia assembles an estimated 127,000 troops on the country’s border, as fears of an invasion trigger a federal warning for Australians to leave the country as soon as they can.

NATO is also putting extra forces on standby and sending more ships and fighter jets to Eastern Europe, the organisation said on Monday and the US was sending warships and aircraft.

Foreign Affairs Minister Marise Payne has asked top security officials to discuss the assistance with their Ukrainian counterparts, in a significant move to intensify Australian support for Ukraine with a message to Russia to “de-escalate” tensions.

The move comes as the federal government tells Australians in Ukraine to “leave now” because of the security situation, while it also begins withdrawing family members of Australian diplomats based in the capital, Kyiv.

The federal government moved at about 9.15pm on Monday to raise the travel advice warning on Ukraine to “do not travel” and telling Australians to leave the country now by commercial means and to be aware that flights could change or be suspended at short notice.

“Consular services and our ability to provide consular assistance to Australians may be limited due to local circumstances,” the government said.

Ukrainian sources estimate there are 1400 Australians in Ukraine but the government did not confirm this figure. The federal government said family members of Australian diplomats planned to depart Kyiv.

“Australians who decide to remain in Ukraine should review their personal security plans, be prepared to shelter in place if required, maintain heightened security awareness and register with the Department of Foreign Affairs and Trade,” the government said.

Ukraine’s top diplomat in Canberra, Volodymyr Shalkivskyi, said the emergency help for critical networks was “at the top of our list” in the discussions after at least 70 government systems came under attack at the height of tensions with Russia.

With the United Kingdom accusing Russian President Vladimir Putin of trying to install a puppet leader in Kyiv, US president Joe Biden is said to be considering plans to send several thousand troops as well as warships and aircraft to allies in the Baltics and Eastern Europe to deter any Russian aggression.

Mr Shalkivskyi dismissed talk of Australia sending troops to defend Ukraine but said his country needed more help like the cyber security assistance and medical supplies it had received in the past.

“There is no easing of the situation, for sure, so we rely on the position, stance and assistance of our partners in this situation, because the Russian military superiority is undoubted,” he said. 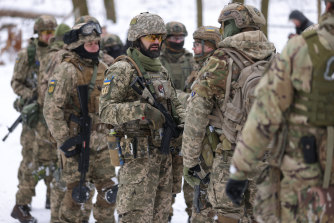 “It is our land and we are not going to give up. So it will cost the conqueror. The occupation of Ukraine would cost a lot to Russia.

“We appreciate any assistance but we do not want to have speculation about Australian soldiers. It is not on the agenda.”

Australia provided cyber security training to Ukraine over the past year and appears willing to broaden that support after Senator Payne spoke to her Ukrainian counterpart Dmytro Kuleba last Wednesday. 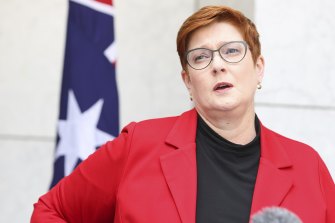 Senator Payne has asked Australia’s critical technology ambassador, Tobias Feakin, a top diplomat with information security experience, to lead the talks with Ukraine officials on the best way to deter attacks on the critical systems.

“Australia strongly supports Ukraine’s sovereignty and territorial integrity and we call on Russia to de-escalate immediately,” she said in a statement.

Australia has imposed sanctions on dozens of Russian individuals and agencies in response to its aggression against Ukraine, including military incursions in 2014 when pro-Russian forces downed Malaysian Airlines Flight MH17, killing 298 passengers and crew including 38 Australians.

But the Russian embassy in Canberra warned against support for Ukraine on the grounds the United Nations Security Council had endorsed a process agreed in Minsk in 2015 to settle differences.

“All those genuinely concerned about peace and security in Ukraine should support the UNSC -endorsed Minsk process rather than encourage Kyiv’s reckless efforts to break it,” a Russian spokeswoman said.

Russian Foreign Minister Sergey Lavrov did not rule out an invasion when asked about Russia’s intentions at a press conference on January 14. He met United States Secretary of State Antony Blinken in Geneva last Friday without any agreement to ease the tensions.

Mr Shalkivskyi, the Charge d’Affaires at the Ukraine embassy in Canberra, said Australia had offered help to Ukraine in recent years including military uniforms in 2015, medical supplies in 2018 and cyber security support last year.

“I presume it will take time, there are no specific agreements, the discussion has only just started,” he told The Sydney Morning Herald and The Age.

“We will appreciate any kind of assistance that Australia will find relevant and possible, and probably cyber security is at the top of our list.”

In one example on the pressure on Ukraine systems, Mr Shalkivskyi said he could not manage or modify the official site of the Ukrainian embassy in Canberra even though the site remains online.

The New York Times reported on Monday that Mr Biden was looking at plans to send several thousand US troops, to NATO allies in the Baltics and Eastern Europe, along with sending warships and aircraft.

The ABC reported last Friday that Ukraine had asked Australia for more help on cyber-security when the subject arose in the call between the foreign ministers last Wednesday.

Senator Payne’s office told The Sydney Morning Herald and The Age the minister had asked Dr Feakin to discuss the possible assistance.

Neither side in the talks put a timeframe on when the help might be offered, but Mr Shalkivskyi emphasised the urgency when thousands of Russian troops were on the Ukraine border.

“This is not a military drill, this is not a game, it requires very significant resources to keep such an armada in the field during the winter,” he said.