Half a dozen galaxies entangled in the gravitational web of a supermassive black hole, less than a billion years after the Big Bang, have been spotted by astronomers.

Researchers from the Italian National Institute for Astrophysics (INAF) say this is the first time such a close grouping has been seen so soon after the universe began.

Black holes emerging in the earliest years of the universe are thought to have formed from the collapse of the first stars – but until now astronomers didn’t know how they were able to grow so big – up to the size of a billion Suns – so quickly.

The observations of the galaxies surrounding the supermassive black hole were made by the European Southern Observatory’s (ESO) Very Large Telescope (VLT).

Finding this tangled web of galaxies ‘feeding’ an early supermassive black hole suggests they grow in web-like structures which contain plenty of gas to fuel them. 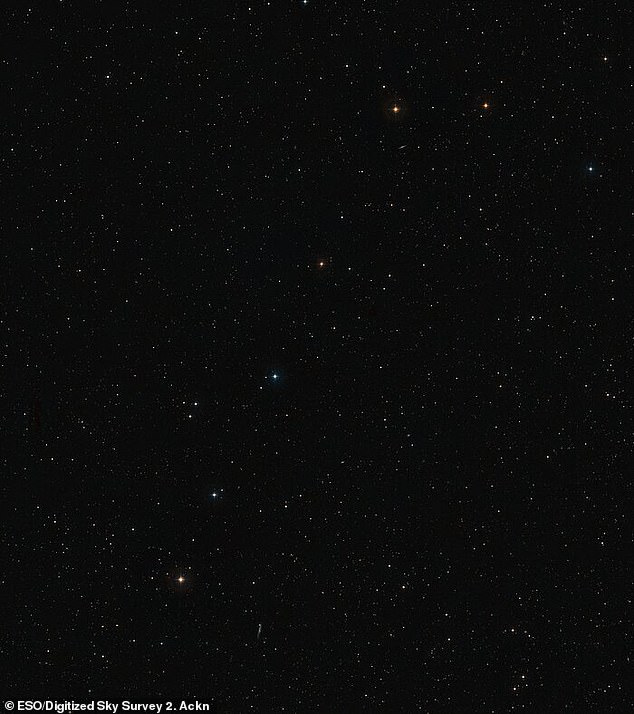 This image shows the sky around the supermassive black hole surrounded by at least six galaxies. This picture was created from images in the Digitized Sky Survey 2

Supermassive black holes are exotic, strange and relatively common cosmic phenomena – they appear at the centre of most galaxies including the Milky Way.

Marco Mignoli, astronomer from INAF, and study lead author, said the research was driven by the desire to understand supermassive black holes in the early universe.

‘These are extreme systems and to date we have had no good explanation for their existence,’ the Italian researcher explained.

All of the galaxies surrounding the black hole were lying in a cosmic ‘spider’s web’ of gas extending to more than 300 times the size of the Milky Way.

‘The cosmic web filaments are like spider’s web threads,’ said Mignoli, adding the ‘galaxies stand and grow where the filaments cross’.

‘Streams of gas – available to fuel both the galaxies and the central supermassive black hole – can flow along the filaments.’

The light from this large web-like structure, with its black hole of one billion solar masses, has travelled to Earth from when the universe was 900 million years old.

The discovery helped fill in part of the puzzle of how these relatively abundant but extreme objects formed so quickly after the Big Bang, the team said.

It is thought the first black holes must have grown very fast to reach masses of a billion suns within the first 900 million years of the universe’s life.

Astronomers have struggled to explain how sufficiently large amounts of ‘black hole fuel’ could have been available to enable these objects to grow so quickly.

The team behind this new study predict that it could be down to dark matter halos. 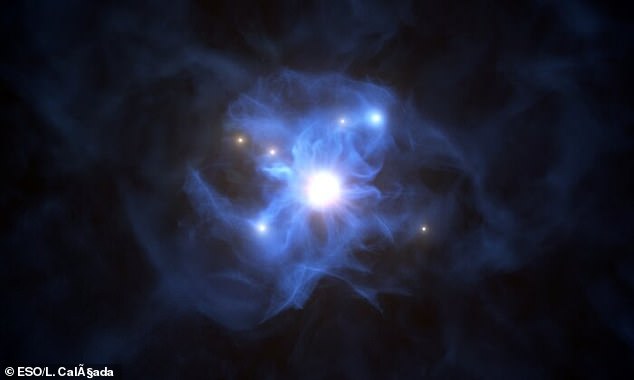 With the help of ESO’s Very Large Telescope (VLT), astronomers have found six galaxies lying around a supermassive black hole, the first time such a close grouping has been seen within the first billion years of the Universe

Colin Norman of Johns Hopkins University in the US, also a co-author on the study, said the discovery adds support to the theory that supermassive black holes form and grow within massive dark matter halos in large-scale web-like structures.

These large regions of invisible ‘dark matter’ are thought to attract huge amounts of gas in the early Universe.

Together, the gas and the invisible dark matter form the web-like structures where galaxies and black holes can evolve and allow a black hole to become supermassive.

The galaxies spotted inside the web are some of the faintest current telescopes – Earth or space-based – are able to spot. 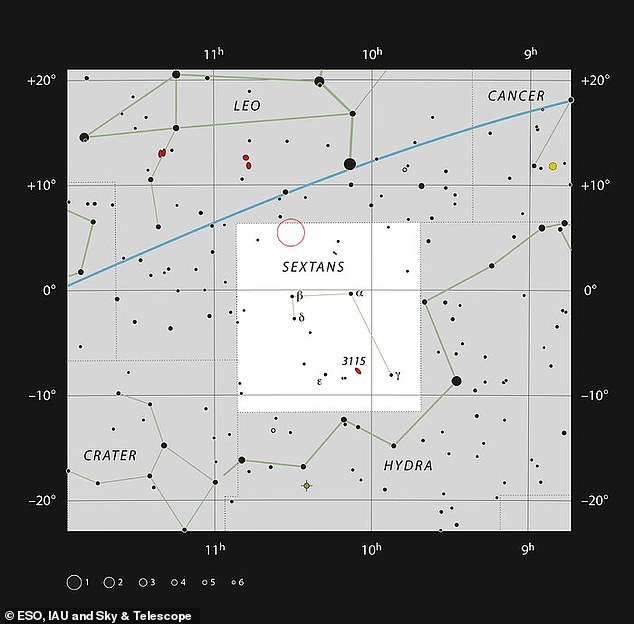 This chart shows the location of the supermassive black hole surrounded by at least six galaxies, in the constellation of Sextans

It was made using the European Southern Observatory’s Very Large Telescope in Chile – but larger telescopes are needed to find even fainter objects.

‘The absence of earlier detections of such structures was likely due to observational limitations,’ Norman explained.

‘We believe we have just seen the tip of the iceberg, and that the few galaxies discovered so far around this supermassive black hole are only the brightest ones,’ said co-author Barbara Balmaverde, an astronomer at INAF in Torino, Italy.

The findings have been published in the journal Astronomy and Astrophysics.

Black holes are so dense and their gravitational pull is so strong that no form of radiation can escape them – not even light.

They act as intense sources of gravity which hoover up dust and gas around them. Their intense gravitational pull is thought to be what stars in galaxies orbit around.

How they are formed is still poorly understood. Astronomers believe they may form when a large cloud of gas up to 100,000 times bigger than the sun, collapses into a black hole.

Many of these black hole seeds then merge to form much larger supermassive black holes, which are found at the centre of every known massive galaxy.

Alternatively, a supermassive black hole seed could come from a giant star, about 100 times the sun’s mass, that ultimately forms into a black hole after it runs out of fuel and collapses.

When these giant stars die, they also go ‘supernova’, a huge explosion that expels the matter from the outer layers of the star into deep space.