Urine from astronauts could be mixed with lunar soil and used to build a future base on the Moon – saving on the cost of shipping material from the Earth, study finds.

NASA, the European Space Agency (ESA) and the Chinese space agency are all planning to build bases on the Moon in the next few decades.

No breathable atmosphere, radiation, extreme temperatures and meteorite bombardment mean a solid structure would be needed for long-term stay.

Researchers for the Polytechnic University of Cartagena, Spain, found the urea in urine could be mixed with lunar soil to create a flexible 3D printed concrete. 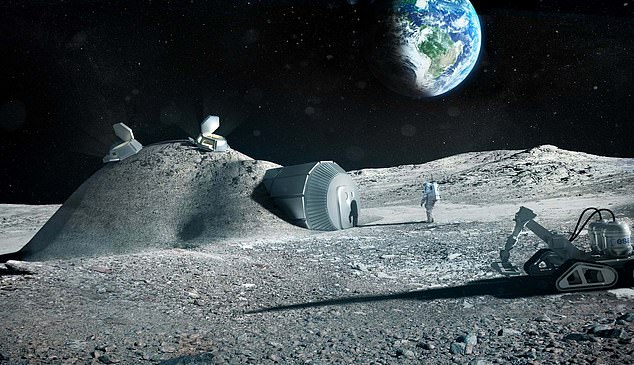 Architects Foster and Partners created a design that could work as a lunar base in partnership witht he European Space Agency. Researchers from Spain say urine could form a base of any future concrete used in 3D printed buildings

Material scientist Ramon Pamies said any construction material would have to withstand extreme temperatures changes while still insulating the base.

He said the two main components of urine are water and urea – a molecule that allows the hydrogen bonds to be broken and helps bind liquid mixtures.

It would plasticise the concrete used to build lunar structures, making them less brittle and more flexible – and in turn more able to withstand the extreme conditions.

It’s not just the temperatures – which range from 250 degrees Fahrenheit during the day to -208F at night – astronauts will also have to deal with high levels of radiation.

The question of what materials to use in building a robust structure on the Moon, how to get those materials to the surface and what form it will take have been debated by scientists and space agencies for years.

As urea can be found anywhere humans are – researchers decided to see how effective it would be in the construction of a Moon base.

Pamies and colleagues built a series of small structures out of simulated regolith – lunar soil – and urea using a 3D printer.

They created cylinders of the urea and simulated regolith mixture to see how well the urea worked to reduce the viscosity of the regolith.

They also made cylinders from the regolith and other plasticisers – materials that make it less viscous – to see how the urea compares to commercial products.

All of the cylinders, including one with no plasticiser, were put through a series of strength tests including being frozen and thawed.

The urea cylinders performed well as they were soft enough to build up a structure without any noticeable deformation while still able to bear heavy loads.

This was based on them being 3D printed materials rather than constructed in another way and also being able to work soon after being printed.

The control mixture with no urea was too rigid to be easily moulded and developed fractures soon after being built up into a structure. 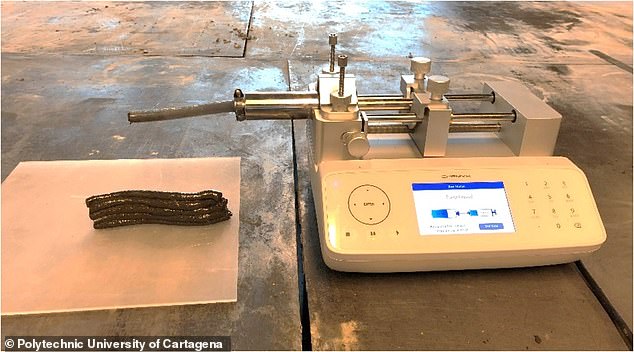 Researchers found that urine made a good material for the construction of lunar bases but more testing is needed, including around the use of urine without having to separate out the urea first.

‘We have not yet investigated how the urea would be extracted from the urine, as we are assessing whether this would really be necessary, because perhaps its other components could also be used to form the geopolymer concrete,’ said materials scientist Anna-Lena Kjøniksen of Østfold University College in Norway.

‘The actual water in the urine could be used for the mixture, together with that which can be obtained on the Moon, or a combination of both.’

This could be of use sooner than many think, as NASA hopes to have a Moon base on the lunar surface as part of the Artemis mission. 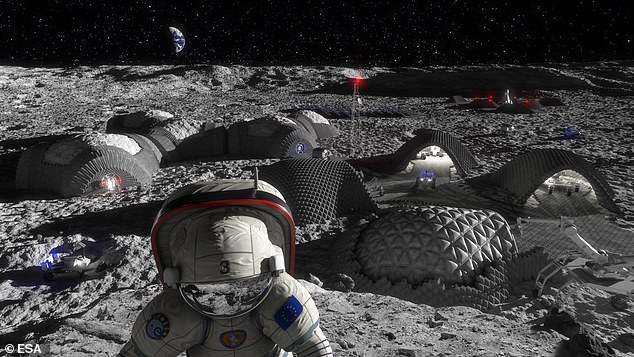 The space agency programme will see it go to the Moon to stay as part of its longer mission to send humans to Mars.

‘More than 45 years since we last set foot on the Moon, our president has renewed the nation’s focus on expanding humanity’s presence beyond Earth,’ NASA wrote.

The goal is to ‘develop a permanent presence off Earth that generates new markets and opportunities, both scientific and economic.’

The plan is to get to have the first woman and next man on the Moon by 2024, an orbiting research station around the natural satellite soon after and as part of the same mission a permanent base – that could be made from 3D printed materials.

The research has been published in the Journal of Cleaner Production.

WHAT IS DONALD TRUMP’S ‘SPACE FORCE’?

US President Donald Trump announced plans for a service branch aimed at ensuring American dominance in space in June 2018.

Trump pleaded to revive the country’s flagging efforts in space, return to the moon and eventually send a manned mission that would reach Mars.

The president framed space as a national security issue, saying he does not want ‘China and Russia and other countries leading us’.

His directive will task the Defense Department to begin the process of establishing the Space Force as the sixth branch of the US armed forces.

‘When it comes to defending America, it is not enough to merely have an American presence in space. We must have American dominance in space,’ Trump said.

Its official badge and uniform was revealed in January 2020.