A spirited jaunt through the history of Australian theatre proves a fitting entree to the first season at the rebuilt La Mama headquarters in Carlton. 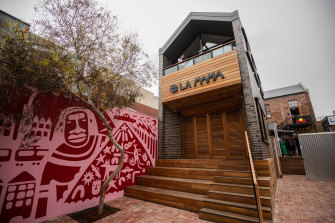 The building itself has a storied past. In previous lives, it was a shoe factory, and more racily a silk underwear workshop. In 1967, inspired by New York’s experimental theatre of the same name, Betty Burstall transformed it into an incubator for Australia’s new wave, led by playwrights such as Jack Hibberd and David Williamson.

Their confidence and determination to forge a distinctly Australian style of theatre had more obscure forerunners, and as Robert Reid’s whirlwind lecture shows, even La Mama’s more recent travails – it was destroyed by fire in 2018 – are hardly without precedent. Fire was the nemesis of many a colonial-era theatre, starting with Australia’s first commercial playhouse, Sydney’s Theatre Royal, opened by Barnett Levey in 1833.

It’s chronological and divided into five rough eras: pre-invasion Indigenous performance, convict theatre, the 19th century actor-manager model, the large commercial companies such as J C Williamson’s that dominated the first half of the 20th century, and – after the founding of the Elizabethan Theatre Trust and its successor, the Australia Council – the age of government-subsidised theatre.

There’s much entertaining and instructive material, though the cultural history within which theatre must be understood – the long shadow of “cultural cringe”, for instance – isn’t spelled out with quite the clarity or intellectual breadth you might expect.

Reid is also far less interesting, and prone to letting emotion cloud his judgment, in his treatment of 21st-century Australian theatre. Although he’s clearly hopping mad about it, Reid doesn’t say precisely why George Brandis’ raid on Australia Council funds in 2015 was such a terrible thing, much less provide evidence for that view.

Reid was a playwright of considerable talent before turning to academia, game design and performance criticism. He’s very enmeshed in the theatre scene himself and faces the same perception problem as, say, an elephant delivering a history of zoos.

Perhaps, rather than using government subsidy as a category post-2000, it would have been more useful to frame the period with the two cultural forces – globalisation and social inclusion – which dominate contemporary theatre and fuel much of its creativity.

It would have made more aesthetic sense, promoted sharper analysis and allowed some of our leading, internationally recognised companies – Geelong’s Back to Back Theatre, or the Brisbane-based Circa – to come to the fore.

A cultural guide to going out and loving your city. Sign up to our Culture Fix newsletter here.