Piers Morgan Accused Of Bullying In Open Letter From 1,200 UK TV Workers After He Targeted Ex-Crew Member On Twitter

Allison Janney revealed an unusual request from a former co-star that left her a bit perplexed and offended.

During her virtual visit on Thursday’s “Jimmy Kimmel Live,” the Oscar winner recalled a co-star who once requested Janney slather her lips with antibiotic ointment before they were to engage in an intimate scene. 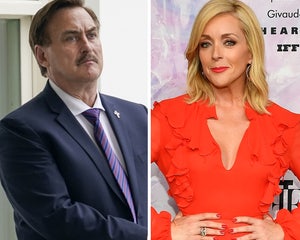 And the coronavirus pandemic had nothing to do with it.

“Even before COVID, I had a scene partner who I had to kiss with,” Janney began. “And he was such a germaphobe, he would put Neosporin on his lips and ask me to put it on mine, too, before he would kiss me.”

“What!” Kimmel exclaimed, confused by the suggestion. “That doesn’t do anything.”

Janney said she wasn’t sure at the time if the application would stop germs from spreading, but she was taken aback, nonetheless.

“I took it very personally,” she continued. “I thought, ‘What does he think I put in my mouth?’ I don’t know. It kind of unnerved me, but people are germaphobes.”

After Kimmel asked if the co-star in question could be Howie Mandel, who has spoken out about his aversion to germs, the “Mom” star shot down the guess.

“You might think so, but no, it was not Howie Mandel,” she replied. “I will not say who it was.”

Janney also revealed that the cast and crew of “Mom,” which is currently in production, take great precautions against Covid-19.

“I get tested almost seven to eight times a week depending upon whether or not I’m going to be doing kissing scenes,” she explained.