Labor leader Anthony Albanese says his party's internal debate on climate policy has been "managed" and the federal opposition has a clear policy that renewables are the cheapest form of new energy generation.

The federal caucus has been bitterly divided over the question of climate targets during the past 12 months, with veteran frontbencher Joel Fitzgibbon quitting his resources portfolio earlier this month while warning it would be electoral suicide to push for deeper cuts in carbon emissions. 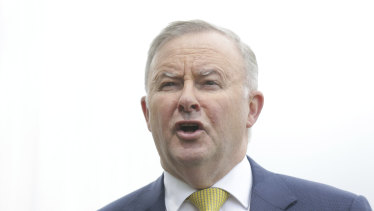 He took a swipe at long-time climate change spokesman Mark Butler on his way out of shadow cabinet, suggesting Mr Albanese move him out of the portfolio in an upcoming reshuffle in favour of a "fresh voice".

Mr Albanese told ABC on Tuesday the Opposition had a policy of zero-net emissions by 2050 and would finalise its party platform at a virtual ALP national conference to be held before Easter.

"We have a very clear policy that sees that renewables are the cheapest form of new energy and that's what the market is saying as well," he said.

He dismissed suggestions a speech from his left-faction ally, Queensland senator Murray Watt, at a Developing Northern Australia Conference in Rockhampton on Monday was a departure from the current policy.

Senator Watt strongly endorsed the export future of coal, iron ore and gas to a "world that's hungry for them", adopting a stronger position on the long-term viability of fossil fuels.

"The fact is the north will continue to source much of its power from coal and gas for years to come and we should treasure every job they create," he said.

"Labor says we don't have to choose the old or the new. Our traditional industries and our new ones both have something to offer. Both have jobs to create. And we should take action now, to grow them both."

A review into Labor's shock 2019 election defeat found the perception that the party was not supportive of the mining industry may have hurt it across Queensland. It faced massive swings against it in central Queensland and went backwards in what were once marginal suburban seats.

Mr Albanese said Senator Watt's speech was "precisely the same thing" that he had been saying.

"He spoke about climate change being good for job creation. That doesn't mean that our export industries are about to close. We'll continue to export our resources. That will continue to provide an income for the country that helps to fund education and health," Mr Albanese said.

"I say the same thing, as does Murray Watt, whether he's in Canberra or in Queensland or in Melbourne or anywhere else."

He said a proposition for a virtual two-day national conference to be held before Easter would be taken to national executive on Friday.

"We'll bear on the experience of the Democratic Convention that was held in the United States," he said.

"In NSW, we held a party convention here for one day about six weeks ago. So, we have that experience. We're able to do it. And I think it will be a success and will enable us to finalise the platform going forward of the Labor Party."