Sapporo: They moved the marathon, but the heat and COVID came with it. On Sunday, the Tokyo Games will end as they started, caught between rising infections, a heatwave and the indomitable spirit of the Japanese people to see them through.

The marathon has historically book-ended the Olympic Games. In Sapporo, on Saturday the women powered through 42 kilometres as temperatures headed towards 30 degrees. The men will do the same on Sunday. 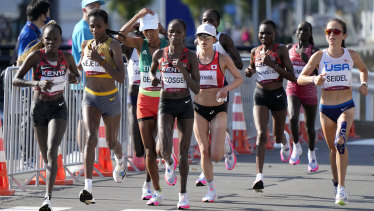 Peres Jepchirchir, left, of Kenya, leads the pack on her way to winning the women’s marathon in Sapporo. Credit:Shuji Kajiyama

Like every step of this Olympics, Japan’s meticulous attention to detail has been torn up by factors outside its control. The decision to move the marathon away from the blazing Tokyo heat to the cooler climates of Hokkaido and its capital Sapporo was taken even before the first cases of coronavirus were reported in China in 2019.

But the weather, much like COVID, has proved a temperamental beast to try to tame for these most gracious of Olympic hosts. Sapporo recorded 35 degrees for the first time in two decades on Thursday. The same day Hokkaido added 342 COVID-19 cases, its highest number of infections in more than two months. Tokyo’s cases are now on the march to 5000 per day and they are creeping further north. 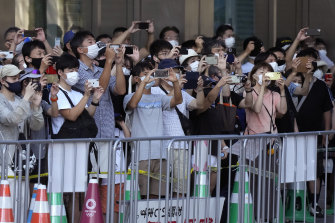 The women’s marathon gave spectators a rare chance to participate in the Tokyo Olympics in Sapporo on Saturday. The men’s event is on Sunday.Credit:AP

Takaya said that COVID had added a10 kilometres onto Japan’s own Olympic marathon just as it neared the finish line.

But much like every part of these Games, obstacles that often felt insurmountable were inevitably climbed. Some 110 runners from 40 countries filled the streets of Sapporo, a city nestled between mountains on the country’s northernmost island.

Among them was 44-year-old Sinead Diver, who came to Australia from Belmullet, Ireland, on a working holiday visa and never left. The mother-of-two started running at 33. On Saturday she made her Olympic debut and finished 10th, four minutes behind the gold and silver medallists from Kenya, Peres Jepchirchir and Brigid Kosgei.

“I hope they are proud of their mum, I’m sure they are screaming at the TV now,” Diver told the Seven Network.

“I gave it everything from about 32km. It’s still a long way to go and it’s really hot out there. I’m just so relieved that I was able to stay strong until the end.” 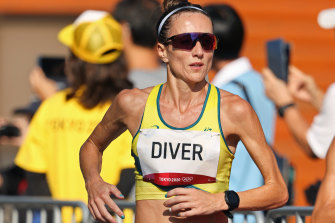 Sinead Diver finished strongly for 10th in the marathon.Credit:Getty Images

Between now and when the Olympic flame goes out on Sunday night, there will be hundreds of families yelling at their TVs as their sisters, brother, sons and daughters go for the 13 gold medals still on offer.

Many of them will be in China, which is set to top the medal table for only the second time and eclipse the US as the world’s Olympic powerhouse with 37 gold.

Heading into the final day of competition it has a four-gold-medal lead over America, which has won 21 of 32 Olympics.

“The key lies in unity,” said Chinese swimmer Wang Jianjiahe. “We have one single target and objective to achieve.”

In Japan, where the host country has won an astonishing 24 gold medals, eight more than its previous record, hundreds are likely to line Sapporo’s Odori Park for the final time on Sunday.

In a country where spectators have been banned from stadiums, the road races, marathons and sprints have given its people the smallest taste of Olympic fever.

“I want the athletes to do well,” said 26-year-old sashimi chef Omuro Ryurosuke. He was sceptical about the Games before they started, but once the cauldron was lit “it was better”.

The attitude reflects some of the division across Japan. The public enjoyed watching the athletes but remain unsure of the future costs. They want a taste of an Olympics that cost them $37 billion to host but are angry that the government may have put them at risk to do so.

Two hours after the women’s marathon had finished in Sapporo, the public was not taking any chances. The green streets around Odori were quiet again, as fans rushed home to settle in for a night in front of the TV.

A rampaging Japanese baseball team had a date with the United States in Tokyo.

Japan has won four games in a row. If it defeats the US baseball team it will be its first gold medal in its most fanatical sport.

It would be a small send-off for a country that has just passed another milestone: 1 million coronavirus cases.

Never miss a medal or great sporting moment with our Olympic update emailed daily. Sign up for our Sport newsletter here.