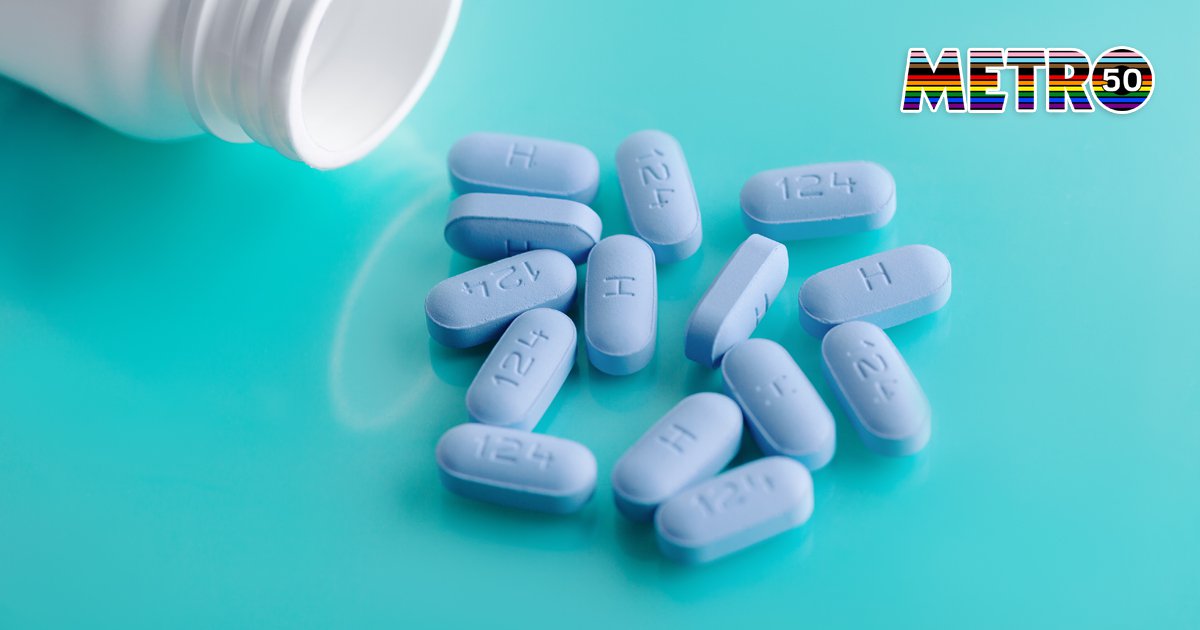 Despite the fact that HIV hasn’t been a death sentence for some time and there’s a drug countless people can and do take to ward off infection, there’s still a huge stigma around the virus and a lack of understanding.

The demystifying of HIV and its prevention is essential when it comes to both public health and the quality of life for those who have been diagnosed with it.

While anyone, regardless of their sexual orientation, has the ability to catch HIV, the association between AIDS and the LGBTQ+ community is cemented in history.

After all, many have argued over the years that a delayed governmental response to the outbreak was down to the fact that HIV AIDS was regarded as a ‘gay plague’.

That’s why we decided to do a deep dive into PrEP for Pride – from exactly what it is, to where you can get it – and asked two experts, GP Dr Babak Ashrafi, Clinical Lead for Service Expansion at medical website Zava and Dr Deborah Lee, of Dr Fox Online Pharmacy, to lay it all out for us in simple terms.

PrEP is a drug that HIV-negative people can take that reduces the risk of getting HIV.

Dr Deborah explains: ‘PrEP stands for “pre-exposure prophylaxis.” Pre-exposure is another way of saying – before having unprotected sex. Prophylaxis is a word used for – tablets taken regularly to stop you from developing an infection.

‘HIV PrEP consists of two drugs – tenofovir and emtricitabine – both contained in one single tablet. These drugs have been used for many years to treat people infected with HIV and are known to be safe and effective.

‘This combination is often supplied in the brand name product, Truvada. This is usually what is available in other countries like the USA, but most of the time, what you get in the UK is the alternative generic option which has exactly the same active ingredients and works in exactly the same way. This means the product contains the same drugs, in the same quantity, but is produced by a different manufacturer.’

Who can take PrEP?

Technically, anybody looking to reduce their risk of getting HIV is able to take the drug.

‘PrEP is a good option for those who are at high risk of becoming infected with HIV and either do not want or are unable to regularly use condoms,’ says Dr Deborah.

‘It is most often used by gay, and bisexual men, trans people, and by heterosexuals if one partner is HIV positive and has a high viral load (their HIV status is detectable), but the other is not,’ explains Dr Ashrafi. ‘But women and other groups of people should use it too if they engage in activities which puts them at high risk for catching HIV. This might include sex workers, or those who have sex with people who are from countries with a high prevalence of the virus.

‘For people living with a partner who is HIV positive, on treatment and has an undetectable viral load, there is no risk of catching it from their partner. Undetectable = untransmissable, so if they have a monogamous relationship, there’s no need for PrEP in this case.

Dr Deborah adds:’PrEP is only advised for intravenous drug users (IVDU) if they are not participating in needle exchange programmes.’

She adds: ‘If a woman becomes pregnant while using PrEP, it is felt to be safe and can be continued throughout the pregnancy and when breastfeeding.’

How effective is PrEP?

PrEP is considered very effective in preventing HIV, however, it varies depending on how people take it.

‘In research studies,’ highlights Dr Deborah, ‘PrEP was found to be 99% effective in preventing the acquisition of HIV from unprotected sex in those who had taken the tablets correctly – one tablet every day, as requested.

‘When HIV transmission did occur, this was almost always because people had not followed the instructions correctly.

There are other recognised and approved ways of taking PrEP, though they may be slightly less effective. For example, in one study, those who only took four tablets a week had 96% protection from HIV infection. In those who took it only twice a week, their protection from HIV fell to 76%.

‘For PrEP to be most effective, you do need to take one tablet every day without fail, adds Dr Deborah. ‘PrEP is endorsed by the World Health Organisation (WHO), the British Association of Sexual Health and HIV (BASHH), the British HIV Association (BHIVA), and the Terence Higgins Trust (THT).’

Who should not take PrEP?

PrEP isn’t necessarily going to be right for everyone.

‘If you live with a partner who is HIV positive but has been on antiviral treatment for at least six months, and has an undetectable viral load, you do not need to take PrEP,’ explains Dr Deborah. ‘It’s not possible to transmit the virus when levels are so low they are unable to be detected.

‘If your risk of acquiring HIV is through vaginal sex, you should not use event-based dosing and should have daily dosing instead, just because there is not enough research yet to say if this is effective.

‘You should tell the doctor about any other medication you are taking to be sure there are no drug interactions. PrEP should not be taken with non-steroidal anti-inflammatories (NSAIDs) such as ibuprofen, naproxen, or diclofenac.’

She adds: ‘PrEP is a way of protecting yourself continuously, and being able to have safe, spontaneous, unprotected sex, however PrEP does not offer protection against any other STIs. If you are at risk of other infections, you cannot rely on it, and should still use condoms carefully and consistently.

‘PrEP is also not an effective treatment for HIV infection. People infected with HIV have strict treatment regimes. Do not confuse PrEP with a standard HIV treatment schedule.’

Dr Ashrafi also explains: ‘You should also not confuse it with PEP – post-exposure prophylaxis. This is different treatment taken after potential exposure to HIV, within 72 hours, through a sexual health clinic or A&E.’

How do you take it?

Dr Deborah says there are two ways to take PrEP:

‘Whichever way you take PrEP,’ she adds, ‘it’s vital not to forget to take the tablet on time, and not to miss out on any doses, as then it may be ineffective. You can remind yourself to take it by setting a reminder on your mobile phone.

‘If you are having a break from PrEP, and have unprotected sex, don’t forget about post-exposure prophylaxis (PEP). You can take this up to 72 hours after the event. If this happens to you, don’t wait. Seek help at the sexual health clinic urgently.’

How can you get PrEP?

You can get PrEP for free on the NHS.

If you want to get it this way, Dr Deborah says you’ll usually have to go to a sexual health clinic.

‘You will have a detailed consultation with a sexual health nurse or doctor’, she says. ‘They will discuss the details with you and help you decide if you want to take it, and if so how to do it.

‘You will be asked to have a full HIV screen at this visit, including tests for HIV, syphilis, chlamydia, and gonorrhoea. These will be repeated when you return to the clinic in 6 months. You may also be tested for hepatitis B and C.

‘Alternatively, you can buy PrEP online,’ adds Dr Ashrafi. ‘ZAVA Online Doctor provides a complete service run by fully trained UK doctors where you are medically assessed for safety and suitability as well as offering all the necessary monitoring tests you need to start and continue taking PrEP as long as you need it. However, take care about sites that sell PrEP without these safeguards and without assessing your testing needs.

Are there any side effects?

Dr Deborah says one in 10 people who take PrEP will experience side effects, which are most commonly headache, abdominal pain, nausea, and vomiting.

‘However,’ she adds, ‘these are usually mild and settle within a few weeks.

‘Rarely, PrEP can affect kidney function, so you will need a blood test every six to twelve months depending on your kidney risk to check this.’

This year marks 50 years of Pride, so it seems only fitting that Metro.co.uk goes above and beyond in our ongoing LGBTQ+ support, through a wealth of content that not only celebrates all things Pride, but also share stories, take time to reflect and raises awareness for the community this Pride Month.

And we’ve got some great names on board to help us, too. From a list of famous guest editors taking over the site for a week that includes Rob Rinder, Nicola Adams, Peter Tatchell, Kimberly Hart-Simpson, John Whaite, Anna Richardson and Dr Ranj, we’ll also have the likes Sir Ian McKellen and Drag Race stars The Vivienne, Lawrence Chaney and Tia Kofi offering their insights.

During Pride Month, which runs from 1 – 30 June, Metro.co.uk will also be supporting Kyiv Pride, a Ukrainian charity forced to work harder than ever to protect the rights of the LGBTQ+ community during times of conflict. To find out more about their work, and what you can do to support them, click here.