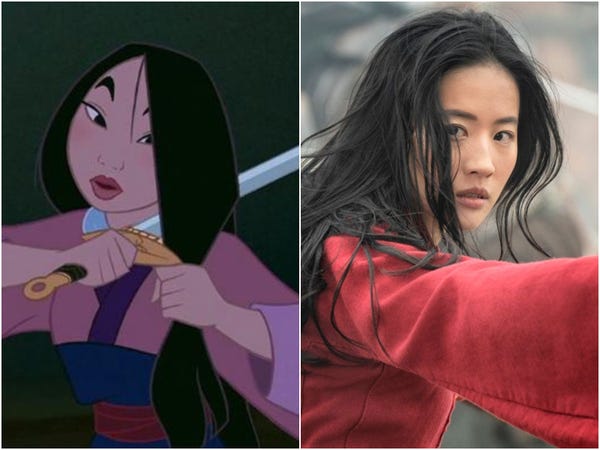 The actress who voiced Mulan in Disney's original 1998 animated film has jokingly called out the live-action remake for not including the iconic hair-cutting scene.

Ming-Na Wen made the playful comment during a recent interview with the New York Times, in which she discusses the cameo she made in the new movie, which stars Yifei Liu as Mulan.

Wen said: "I'm sure Yifei is going to get incredible accolades as the live-action Mulan, but I hope everyone will still have a little place in their hearts for the animated Mulan. I mean, at least she cut her hair!"

The hair-cutting scene is a powerful fan-favourite moment that sees Mulan deciding to take her father's place in the imperial army by pretending to be a man in order to save his life. Mulan cuts her hair, which many fans see as her shedding her feminimity and taking on a more masculine look. She also steals her father's sword and armour while a terrific synthesizer score plays.

Some fans lamented the omission of this moment from the new movie as a pivotal one in Mulan's journey, while the equivalent remake scene feels oddly underwhelming compared to the impactful hair-cutting scene.

However, others have argued that the hair-cutting scene in the original is actually just a "Eurocentric" idea that serves Western audiences, as Chinese men of that era never actually cut their hair.

This means that in the new movie, when Yifei Liu's Mulan lets her hair down and reveals herself as a woman, her locks wouldn't have actually looked all that different to the other Chinese soldiers, as they would have had hair of a similar length.

Producer of the live-action remake, Jason Reed, told Slash Film in February: "In the Disney film, the scene where she's cutting her hair off, it's actually an anachronism. So Chinese warriors, male warriors wore their hair long. Chinese men wore their hair long… Since we're doing the live action version, because we're looking at the world wide market we thought we had to bring that level of cultural accuracy to it."

In the new movie, Ming-Na Wen has a cameo as an "esteemed guest." At the end, after Mulan has saved the Emperor (Jet Li), Ming-Na Wen plays a woman who introduces Mulan to him so he can reward her for her bravery and valor.

Jason Reed told Insider: "This has been a very important part of her life and has been ever since the movie came out.

"She's been the face of the movie for a long time and she was super excited to be involved and to come to the set."