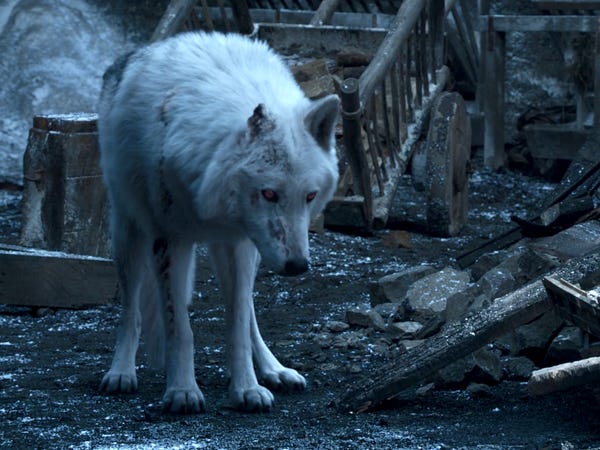 For  "Game of Thrones" fans, the ongoing revelations about the show's adaptation choices (and what parts of George R.R. Martin's original story were left behind) is still a topic of much debate. One of the most fraught changes made from the books was also perhaps the most inevitable: The Stark children's direwolves were relegated to small background details, instead of playing a significant role in the story.

In Entertainment Weekly editor James Hibberd's new oral history of the HBO show, "Fire Cannot Kill a Dragon," coproducer and writer Bryan Cogman speaks more about the changes made to the direwolves' story.

"The direwolves were supposed to mean more than they ended up meaning," Cogman says in the book. "A lot of plans for the direwolves ended up not coming to fruition."

In 2013, the series showrunners David Benioff and D.B. Weiss were forthcoming about the challenges of creating the larger-than-life direwolves. Unlike with a dragon, people watching at home know exactly what a wolf should look like and how they move — which means making a VFX-enhanced direwolf realistically blend into live-action scenes is much more difficult (and expensive).

Fans were bothered by the direwolves' smaller role in the show, since they have a significant meaning to the Stark children in the books

Still, fans were miffed to see Bran and Rickon Stark's direwolves unceremoniously killed off in the sixth season of the show. That left Jon Snow and Arya Stark's wolves, Ghost and Nymeria. In George R.R. Martin's books, both Jon and Arya show signs that they are wargs. They can inhibit the minds of their direwolves, just as Bran does with Summer earlier in the story.

In "Fire Cannot Kill a Dragon," Cogman says he thinks "the direwolves represent the spirit of the North and the soul of House Stark and the soul of those characters […] but we never really wanted to lean too heavily into the spirit-animal trope of it all."

Much like the magical birth of Daenerys Targaryen's three dragons was a direct link to House Targaryen's mythological history, the discovery of direwolf pups was a significant omen for House Stark. There was one pup for each Stark child, including Jon Snow.

Earlier in the oral history book, Cogman described his efforts to make sure the direwolves' discovery was given narrative weight in the first attempted "Game of Thrones" pilot episode.

"When we first shot the scene where the Starks find the direwolves — this was the version you never saw — the wonder of what a direwolf was wasn't coming across," Cogman said. "It didn't seem important enough to the characters. And I'm little assistant Bryan running around the set yelling to anyone who would listen: 'These are direwolves! No one has seen these in a million years! This is like seeing dinosaurs! It's not like finding puppies!'"

Cogman said everyone else was "sort of chuckling" in response.

By the eighth and final season of 'Game of Thrones,' the direwolf pack was whittled down to two survivors thanks to increasingly complicated VFX

Sansa's direwolf, Lady, was killed in season one thanks to Cersei Lannister's machinations. Robb Stark's direwolf, Grey Wind, was killed at the Red Wedding. Both of those wolf-deaths happened in Martin's novels, too.

But then in the sixth season, Bran's direwolf Summer and Rickon's direwolf Shaggy Dog were both killed (though they're alive in Martin's currently published books).

Nymeria, who is roaming the Westeros countryside with a wolf pack in Martin's books, was left as a wild wolf in the show. In the end she was untameable and divorced from the goings-on in Westeros, just like her once-owner Arya Stark is by the series finale.

As for Ghost, he had been absent for most of the sixth and seventh seasons, but reappeared in season eight to help in the Battle of Winterfell. When Jon traveled south after the battle, he left Ghost behind without so much as a pat on the head. This choice (along with one cut scene of Ghost in season seven, and his absence from the Battle of the Bastards) had a direct link to the show's constraints that Benioff and Weiss have spoken about.

According to the director of the episode, David Nutter, Jon didn't have any physical interaction with Ghost for that scene because the production team needed to streamline the filming process.

"Well, the good thing was [Ghost] wasn't right next to the actors and so forth," David Nutter told Insider when asked about the challenges of having a CGI wolf in the scene. "So there wasn't any issues with green screen or situations where we're dealing with any kind of rotoscoping."

We asked if this meant that keeping Ghost and Jon separated was part of the plan for simplifying filming, and Nutter responded, "Yes."

Rotoscoping is a time-consuming visual-effects process in which people have to go frame by frame to manually edit one element of a scene. Since the second season of "Game of Thrones," the wolves used to play Ghost, Grey Wind, Summer, Nymeria, and Shaggy Dog were real wolves shot on a Canadian green-screen stage.

The VFX team would then effectively cut and paste (or, to use the technical term, rotoscope) the wolves into the scenes you see on the show. This is part of the reason the characters rarely physically interact with the direwolves; it makes it less complicated to work the wolves into a live-action shot if all they're doing is standing there.

Steve Kullback, the show's VFX producer, once explained another reason the wolves are kept apart from the cast in a the book "Inside HBO's Game of Thrones."

"Wolves remain dangerous even after training," Kullback said. "The reality is, wolves can be trained to do only so much, and that has introduced a challenge in its own right, which the writers sometimes have to work around."

This is all why "Game of Thrones" came to a close with very little narrative importance imbued in the Starks' direwolves.

But at least fans got the consolation of seeing Jon Snow give Ghost some very well-earned head scratches before they rode beyond the Wall to live their remaining days together in the wild North.