In loving memory. Queen Elizabeth II shared a never-before-seen photo with her late husband, Prince Philip, one week after his death.

“The Queen wishes to share this private photograph taken with The Duke of Edinburgh at the top of the Coyles of Muick, Scotland in 2003,” the Instagram caption read on Friday, April 16, via the royal family’s official social media page.

The snap, which was taken by the couple’s daughter-in-law, Sophie, The Countess of Wessex, who is married to their youngest son, Prince Edward, showed the royal pair smiling out in a field in the Scottish countryside.

“Her Majesty and the Royal Family are grateful for all the messages of condolence from around the world and have been touched to see and hear so many people sharing fond memories of The Duke, in celebration of his life,” the statement concluded.

The queen, 94, wore a green top and matching green cardigan with a pearl necklace and red plaid skirt as she sat beside her husband. The Duke of Edinburgh, who died at the age of 99 on April 9, had a grin on his face in the photograph as he laid in the grass wearing a blue crew-neck sweater and khaki pants. He also had a khaki bucket hat placed on his knee while posing with his wife. 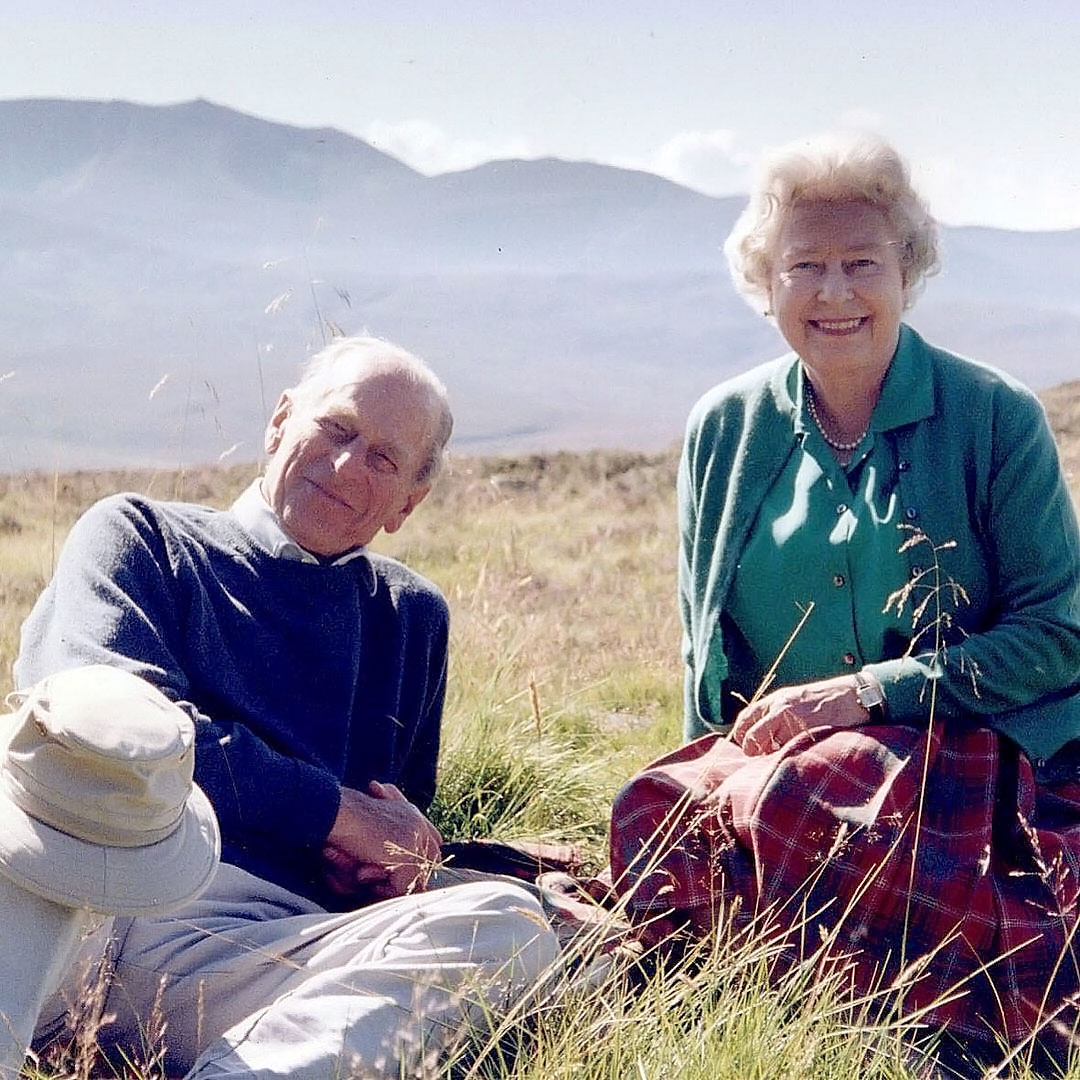 Buckingham Palace announced Philip’s death last week. “It is with deep sorrow that Her Majesty The Queen has announced the death of her beloved husband, His Royal Highness The Prince Philip, Duke of Edinburgh. His Royal Highness passed away peacefully this morning at Windsor Castle,” the family’s statement read at the time. “The Royal Family join with people around the world in mourning his loss. Further announcements will be made in due course.”

A source exclusively told Us Weekly at the time that the monarch, who was married to Philip for 73 years, is “heartbroken” over the loss of her husband. Although Philip had been in the hospital for 28-days ahead to his return home in March, the insider said his death was “still a surprise” for his loved ones.

Since his passing, the royal family has released multiple photos from their personal collection to honor the former naval cadet. The queen shared a photo with her beloved counterpart via Instagram on Saturday, April 10, noting that her husband, was “a devoted consort (companion to the Sovereign) for almost 70 years.”

The post also included a quote from a speech given by the royal matriarch on the couple’s golden wedding anniversary in 1997. “He has, quite simply, been my strength and stay all these years, and I, and his whole family, and this and many other countries, owe him a debt greater than he would ever claim, or we shall ever know,” she said of the Greece-born prince at the time.

The family also released images of Philip throughout his years of military service, with his kids — Prince Charles, Princess Anne, Prince Andrew and Prince Edward —and traveling around the world with his wife.

The trip down memory lane included throwback snaps with the couple’s grandson Prince William and his children, Prince George and Princess Charlotte as babies in 2015.

“Today we share, along with Members of @theroyalfamily, photographs of The Duke of Edinburgh, remembering him as a father, grandfather and great-grandfather,” the caption read via Instagram on Wednesday, April 14.

The Duke of Cambridge, 38, also shares son Prince Louis with wife Duchess Kate, who was featured in a second photo of the queen and Philip posing with seven of their 10 great-grandchildren back in 2018.

Philip and Elizabeth’s four children gifted them with eight grandchildren and now 10 great-grandchildren with number 11 on its way. Grandson Prince Harry is expecting his second baby with wife Meghan Markle.

The royal patriarch’s memory will be honored on Saturday, April 17, at a funeral in England, with Us previously confirming that Harry, 36, arrived solo in the U.K. ahead of the service. Meghan, 39, is unable to attend the event as she nears the end of her pregnancy and was advised by doctors not to travel.