Lord Alan Sugar, 73, has called Good Morning Britain star, Piers Morgan, 55, a “deluded pillock” and accused him of not giving “a s*** about the matters he is raising”. The Apprentice star told his Twitter followers how they are “fooled” by the ITV presenter.

YOU DELUDED PILLOCK TAKING CREDIT FOR THIS.

This comes after Piers updated his 7.5 million followers with the news that he and the Good Morning Britain team campaigned for the Prime Minister, Boris Johnson, to get rid of the “migrant NHS surcharge”.

The GMB host divulged: “We campaigned on @GMB for PM to scrap migrant NHS surcharge. He did.

“We’ll keep doing our jobs, no amount of complaints to @Ofcom will stop us…”

Piers is also believed to have had some input in Captain Tom Moore’s knighthood for his fundraising efforts for the NHS. 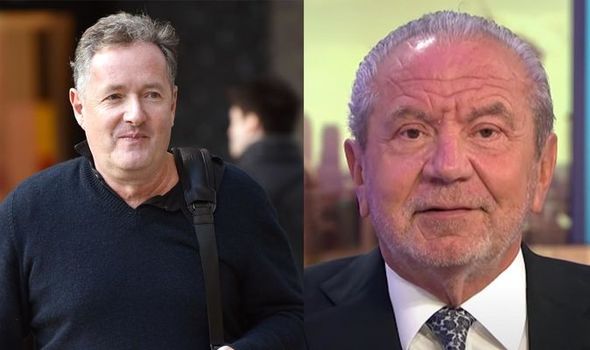 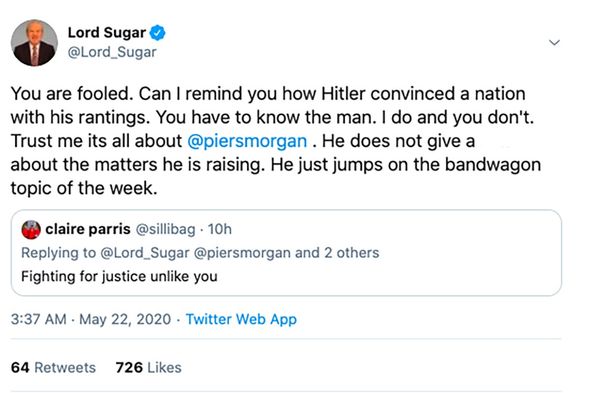 However, this seemingly tipped Lord Alan Sugar into speaking out as he expressed his thoughts over the TV presenter on Twitter last night.

In response to Piers’ statement, Lord Sugar wrote to his 5.3 million Twitter followers: “YOU DELUDED PILLOCK TAKING CREDIT FOR THIS AND CAPTAIN TOM’S KNIGHTHOOD.

The BBC favourite received one reply which backed Piers’ efforts with the NHS. 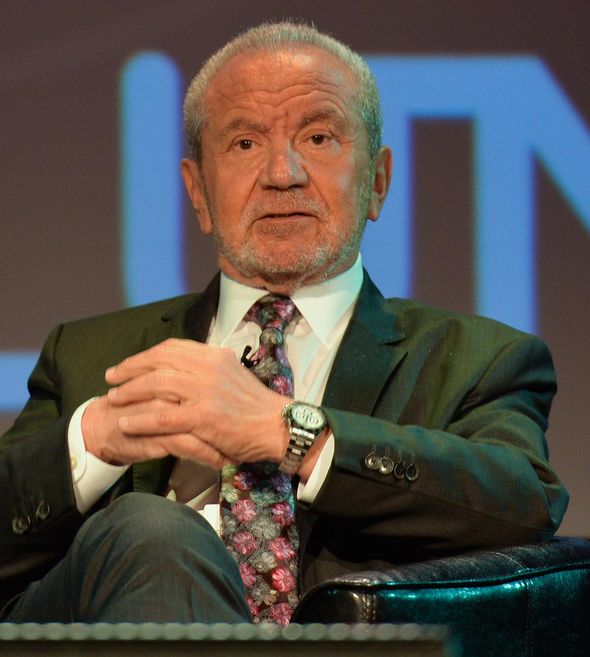 One wrote to Alan: “Fighting for justice unlike you,” which led the political adviser to hit back with: “You are fooled. Can I remind you how Hitler convinced a nation with his rantings.

He continued: “Trust me its all about @piersmorgan. He does not give a s*** about the matters he is raising.

“He just jumps on the bandwagon topic of the week.”

Express.co.uk has contacted representatives for Lord Alan Sugar and Piers Morgan for comment.

Piers is yet to respond to Alan’s comments, and this comes shortly after he praised Boris Johnson’s U-turn decision to drop the NHS migrant worker surcharge policy.

The NHS worker surcharge was a policy in place which meant NHS workers from overseas were going to be required to pay £624 from October, rising from £400.

Piers tweeted: “Having been heavily critical of @borisjohnson throughout the crisis, let me now say this: leadership is sometimes about admitting you’re wrong & scrapping a bad idea – as with the NHS migrant worker surcharge.”

This follows on from Sir Keir Starmer raising the concerns around the policy during the Prime Minister’s Question Time session on Wednesday.

He asked Boris: “Does the Prime Minister think that it’s right that care workers coming from abroad and working on our front line, should have to pay a surcharge of hundreds, sometimes thousands of pounds, to use the NHS themselves?”

The Prime Minister responded back with: “It’s very difficult, in the current circumstances, to find alternative sources.”

He also added how keeping the surcharge would be “the right way forward”.

However, Boris followed the Government’s decision to drop the charge yesterday.