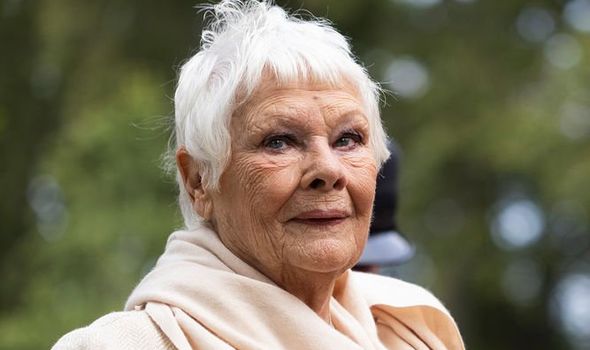 Search online for “Dame Judi Dench” and “trees”, and there is a veritable forest of words written about her passion for them, alongside photographs of her stroking bark and even listening, with a sort of ear trumpet, to the wonderful sounds they make.

Also a staunch monarchist, it was hardly surprising that Dame Judi was given the honour of officially kicking off the Chelsea Flower Show which includes major exhibits to mark the Queen’s Platinum Jubilee and highlight the climate crisis.

Dame Judi cut a garland at the Royal Horticultural Society event — held for the first time in autumn rather than spring because of Covid — to open the Queen’s Green Canopy Garden and encourage people nationwide to get planting trees.

The Garden is the largest plot at the show, with 21 trees and more than 3,500 plants, to highlight the importance of trees – something Dame Judi knows a lot about.

The Oscar-winning actress, 86, has turned the six-acre garden of her Surrey home into large natural woodland.

She has added to the many mature trees already there when she bought the house with her late husband, the actor Michael Williams, 30 years ago by planting new saplings to commemorate relatives and friends who have died.

“I plant trees all the time in my garden,” said Dame Judi. “For every single friend of mine who’s died, I plant a tree. So my garden is quite full, and I have quite a lot more to go yet.”

And there is a space for another special tree, which will be planted next month, in honour of Her Majesty. “I have already got her tree to plant to mark the Queen’s Platinum Jubilee, a Himalayan silver birch,” she explained.

“It’s got the whitest trunk you’ve ever seen, it’s very, very, beautiful… it’s not gone in yet. It’s going in just after October 1 when the planting season starts.

“We have never had the opportunity to celebrate a Platinum Jubilee before, never had someone 70 years on the throne before. The work the Queen has done — is doing — is remarkable, and what better way to celebrate than by having a garden and then for all of us to take that on and plant a tree, which is also doing something for climate change?”

The Queen missed Chelsea this year for the first time since 2005 and remains in Balmoral where she is expected to stay until October. It is only the tenth time she has been absent from the flower show, held in the grounds of the Royal Hospital Chelsea.

Dame Judi, who was joined at Chelsea by her actress daughter Finty Williams, has spoken in the past of her twin passions — William Shakespeare and trees — and said she hoped the 95-year-old monarch “gets a quiet time to come and have a little wander about” in the new garden dedicated to her reign.

The star was in reflective form visiting the show and talked about what trees mean to her.

In fact, so important are they in her life that the actress made a one-hour BBC documentary called Dame Judi Dench: My Passion For Trees in 2017 and invited cameras into her beautiful Surrey haven.

Asked if the trees planted for loved ones who have died make for bittersweet memories, she replied: “Well it is bittersweet in a way… but not bitter – it’s the sweet bit… except you see the trees get tall quite fast and you think, ‘Gosh they died a long time ago’.”

Her garden, in the village of Outwood, also contains a Banksia rose presented to her and her late husband.

“I have a lovely little Banksia rose which Michael and I were given when we did a recital at Chatsworth and it is against a barn and it is just one massive yellow rose and then beside it is some wisteria which goes up in the tree.”

There is also a towering tree dedicated to Michael, who died 20 years ago, with a wooden plaque beneath it with the word “Mike” written on it.

She started the living memorial with him. “Every time a relative or friend died we would plant a tree,” she said. “It is about remembering and for me, it’s something that’s living and goes on. The memory goes on and gets more wonderful.”

The actress has also dedicated trees to her actor brother Jeffery Dench, and friends from the profession, including Ian Richardson, Robert Hardy, and Natasha Richardson.

Despite her love of the outdoors, Dame Judi is not green-fingered herself. “I have a large garden and a wildflower meadow. I am not a hands-on gardener and I am actually the worst. I have a marvellous gardener, who does it for me.”

She shares her passion for trees and nature with her partner of 11 years, David Mills, a former dairy farmer who founded the British Wildlife Centre in 1997.

After Michael died of lung cancer at the age of 65 in 2001, Dame Judi thought she would never find love again.

But a couple of years later, David asked the Skyfall star if she would open the new badger enclosure at the centre, which is just a few fields away from her home. Although she declined at the time due to her health, she later opened their red squirrel enclosure and met David.

It is about remembering and for me, it’s something that’s living and goes on. The memory goes on and gets more wonderful

The couple have been together ever since. And David disclosed this week that they had a serious conversation about getting married during lockdown – but ultimately decided against it.

“We hadn’t really looked into it before, but we looked at the pros and cons,” said David.

“After a lot of thought, we decided against it and thought, ‘We are happy to stay as we are’, as we have got two separate houses. And we are either in one or the other and we are four miles apart.”

When asked about the prospect of marrying again recently, Dame Judi replied: “No, no, no, no, no. Let’s just pull ourselves together and be our age!”

The star joined the James Bond franchise and the role of M after decades of Shakespearean theatre. She succeeded the late Robert Brown in her first James Bond role in GoldenEye in 1995, when Pierce Brosnan was still 007.

While she may not star in the highly anticipated new movie, No Time To Die – she made her seventh and final appearance as M in the 23rd Bond film, Skyfall, in 2012 – she wouldn’t miss the premiere in London next week for all the weapons in 007’s arsenal.

And, the actress jokes, she even considered causing a stir worthy of distracting attention from the outgoing Bond Daniel Craig on the red carpet by wearing nothing but a pair of high heels.

“I don’t know what I’m wearing yet,” said Dame Judi. “Nothing – and a pair of shoes. I don’t think Daniel will be very pleased!” she adds with that trademark Dench sense of mischief.

In fact, she admits that she would never have accepted the role of M had it not been for her late husband. “He said to me, ‘You’ve got to do it because I long to live with a Bond girl!'” said Dame Judi, laughing at the memory.

As for Daniel Craig’s departure from the role, she diplomatically adds: “Well, it’s up to him, isn’t it? He was a great Bond. It’s up to him. And so was Piers and so was Sean. They’ve all been so terrific.”

But there’s no way Dame Judi could have been in the latest Bond film because she is too busy working on other projects.

“I have done a new film called Belfast for Kenneth Branagh, the premiere is going to be very shortly and I am going to work with [director] Richard Eyre on Alan Bennett’s Allelujah!, a film.”

In addition, Dame Judi will be back on our screens next month in the BBC’s Bafta award-winning genealogy show Who Do You Think You Are?

In her case, this led to Denmark and nobility, where she discovered Shakespearean links.

She also learnt more about her doctor father, Reginald – who never spoke of his experiences in the First World War. Although from Dorset, he moved to Dublin where her mother, Eleanora, was born.

Reginald was studying at Trinity College and was the GP for the York Theatre. Eleanora was its wardrobe mistress.

These days, especially in winter, Dame Judi is at her happiest in her garden, or beside a roaring fire with David.

During lockdown, their TikTok routines together went viral (she famously danced to Jason DeRulo’s Savage Love in her back garden) – not least because he looks like a certain world-famous singer.

“It was funny because Ed got in touch with him and we all went to his concert. I met him, he was absolutely charming. We have a photograph and you have to say which one is Ed Sheeran when they are together. They are real doppelgangers.”

Dame Judi is certainly not planning on hanging up her costumes any time soon, but would she like someone to plant a tree for her?