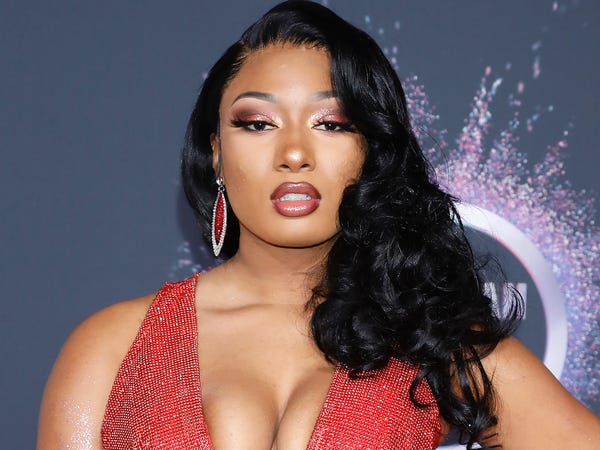 Megan Thee Stallion isn't afraid to bare it all in sheer catsuits, hot pink string bikinis and bodycon dresses. But that doesn't mean she chooses her outfits in order to pander to men. In fact, it's the exact opposite.

"I've received quite a bit of attention for appearance as well as my talent," the "Savage" rapper began in a new op-ed for the New York Times

"I choose my own clothing," she continued. "Let me repeat: I choose what I wear, not because I am trying to appeal to men, but because I am showing pride in my appearance, and a positive body image is central to who I am as a woman and a performer."

According to Megan, she "value[s] compliments from women far more than from men," but that doesn't change the fact that many still pass judgment on the Houston rapper for her risqué outfits.

"The remarks about how I choose to present myself have often been judgmental and cruel, with many assuming that I'm dressing and performing for the male gaze," she wrote. "When women choose to capitalize on our sexuality, to reclaim our own power, like I have, we are vilified and disrespected."

In the wide-ranging op-ed, Megan also wrote about the July altercation, involving herself and singer-rapper Tory Lanez. The "Girls In The Hood" rapper said previously that Lanez shot her twice in both feet, a claim that Lanez denied.

"I was recently the victim of an act of violence by a man. After a party, I was shot twice as I walked away from him," she wrote.

According to Megan, she and Lanez "were not in a relationship" at the time of the incident.

"Truthfully, I was shocked that I ended up in that place," she wrote.

On Thursday, Los Angeles prosecutors charged Lanez with shooting Megan during the altercation. Lanez will be arraigned in Los Angeles on Tuesday.