Kylie Jenner reposted a photo of herself as a child along with a recent photo of her daughter Stormi and they looked like twins.

Kylie Jenner, 23, showed off the similar features she shares with her baby girl Stormi, 3, in a new post. The makeup mogul reposted a side-by-side pic, which was originally shared on a fan Instagram account, of her and her daughter as toddlers on her own Instagram story on Mar. 16 and their resemblance is uncanny! In the post, little Kylie is giving a serious look to the camera as she poses in a black top with a tiny pink rose detail along with a brown headband with a bow over her bob style haircut with bangs, and Stormi is wearing a purple princess dress with a tiara as her hair is pulled up.

A post shared by Keep up with the Kardashians🔥 (@dash.universe_)

Both gals have big brown almond-shaped eyes and similarly shaped noses in the pics, and even their ears seem to be the same shape! Kylie didn’t add any caption to the post, but one wasn’t really needed since the apparent comparison could clearly be seen. Although the look-alike snapshots were incredible, it’s not the first time we’ve seen similar pics of the mother and daughter.

On Mar. 11, Kylie shared a different side-by-side pic of her as a child along with Stormi and they again could have passed as twins. The photos showed them both wearing bows in their hair with stylish outfits. Kylie appeared to be dressed like Dorothy from the Wizard of Oz in a blue and white checkered outfit and Stormi wore a beige crochet-knit top. 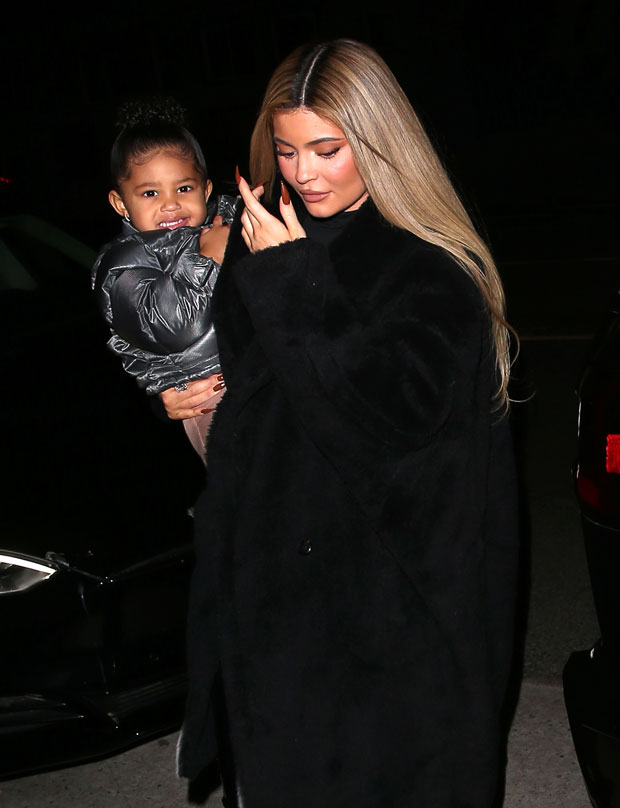 When Kylie and Stormi aren’t wowing with their look-alike features, they’re getting attention for other adorable pics and videos. On Mar. 14, the Keeping Up with the Kardashians star shared a video of the tot dancing along to Dua Lipa‘s performance of “Don’t Stop Now” at the 2021 Grammy Awards. They were watching the live show on television and Stormi was very energetic while busting the moves in her pink pajamas, which had yellow lemons on them.

It’s always thrilling to see Kylie and Stormi living it up and sharing memorable moments together. We look forward to seeing what else they get up to in the future!