Jimmy Fallon took steps to rectify a mistake on “The Tonight Show” last week that saw him fail to credit creators for their viral TikTok dances.

The host previously had Addison Rae, who is a TikTok celebrity herself, on the late-night show to perform a series of eight dances that have been taking the popular social media site by storm. Rae performed the dances to music played by in-house band The Roots while Fallon held up signs instructing the young star on what dance to do next. However, the duo caught backlash for failing to credit the creators who actually came up with the dances they performed.

On Monday, “The Tonight Show” returned from a week-long vacation and Fallon immediately addressed the backlash and took steps to fix it. 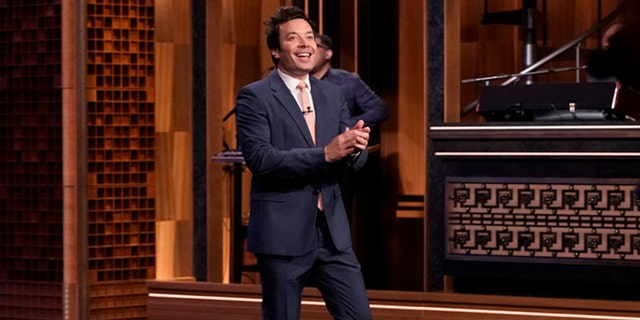 ‘The Tonight Show’ responded to backlash by having the creators of viral TikTok dances on the show.
(Andrew Lipovsky/NBC)

“On our last show before break, we did a bit with Addison Rae where she taught me eight viral TikTok dances,” the comedian told his viewers. “Now, we recognize that the creators of those dances deserve to have their own spotlight.”

He continued, “So right now, some of the creators will join me to talk about how their dance went viral and then perform the dance themselves.”

With that, Fallon interviewed several of the creators behind the TikTok dances that Rae performed on his last episode, including Mya Nicole Johnson and Chris Cotter (“Up”); Dorien Scott (“Corvette Corvette”); Fur-Quan Powell and Camyra Franklin (“Laffy Taffy”); Adam Snyder, Nate Nale and Greg Dahl (“Blinding Lights”); and Keara Wilson (“Savage”), according to E! News.

Rae responded to the backlash while speaking to TMZ in Los Angeles shortly after the initial segment aired.

“I think they were all credited in the original YouTube posting, but it’s kinda hard to credit during the show,” she said. “But they all know that I love them so much and I mean, I support all of them so much. And hopefully one day we can all meet up and dance together.”

The backlash was part of a larger debate happening on TikTok as influencers with more mass appeal on the platform are able to perform dances that they didn’t necessarily create, therefore popularizing them and being falsely credited with originating them.