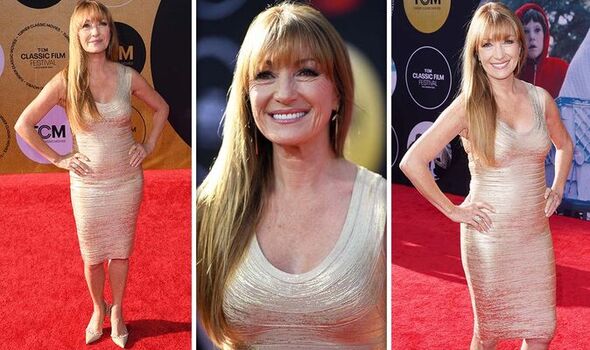 Jane Seymour, 71, stunned fans as she walked the red carpet in a fabulous skintight dress during the 40th Anniversary Screening of ET the Extra-Terrestrial at the 2022 TCM Classic Film Festival.

The event, which took place at the TCL Chinese Theatre in Los Angeles last night, saw Jane wear a figure-hugging midi dress in a champagne tone.

The legendary Bond girl accessorised the look with minimal jewellery and wore her trademark straight hair down.

It comes after Jane recently addressed rumours about her ageless appearance, claiming she had undergone a cosmetic procedure to lift up and pull back the skin to make the face tighter and smoother.

Speaking earlier this month on Steph’s Packed Lunch, Jane stressed that she had not had a facelift, but was not against people getting the procedure.

She said: “I don’t have anything against anyone doing plastic surgery, I’ve never said that I haven’t done anything.

“I think I was probably asked, ‘have you done a facelift?’ And I said, ‘no, I haven’t’. That doesn’t mean I don’t think anyone else shouldn’t.”

The figure-hugging midi dress was accessorised with minimal jewellery

She recently addressed rumours about her ageless appearance

Jane recently stressed that she had not had a facelift

Jane made her screen debut as an uncredited extra in the 1969 musical comedy Oh! What a Lovely War