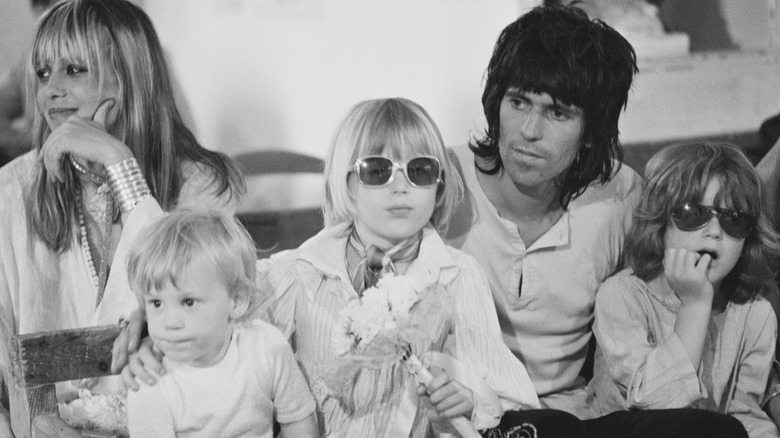 To say that Keith Richards leads a busy life is an understatement. Since 1962, the musician has been the guitarist of the Rolling Stones which he formed with lead singer Mick Jagger. Over the course of his career, Richards also found the time to raise four children with his partners Anita Pallenberg and Patti Hansen.

With Pallenberg, Richards has three children. His eldest is Marlon Leon Sundeep, born in 1969 followed by his daughter Dandelion Angela in 1972. He also had another son with the Italian-born actress, Tara Jo Jo Gunne, who sadly passed away of sudden infant death syndrome (SIDS) in 1976. He was only two months old. Richards was away on tour at the time of his son’s death, and it’s “haunted him ever since” (via Heavy).

Richards and Pallenberg would eventually split, and the guitarist went on to marry Patti Hansen in 1983. He has two children with Hansen, daughters Theodora Dupree and Alexandra Nicole.

As a father and grandfather, Richards has nothing but good things to say about his family life. “I love my families,” he told the Express, adding “I have several – extended. And they all love each other. I’m extremely blessed with my ladies who all, thank God, get along.” And it seems those family ties have stayed stable throughout the toughest of times, leading to strongly forged relationships between Richards and his kids.

Marlon Richards didn't have the most conventional upbringing 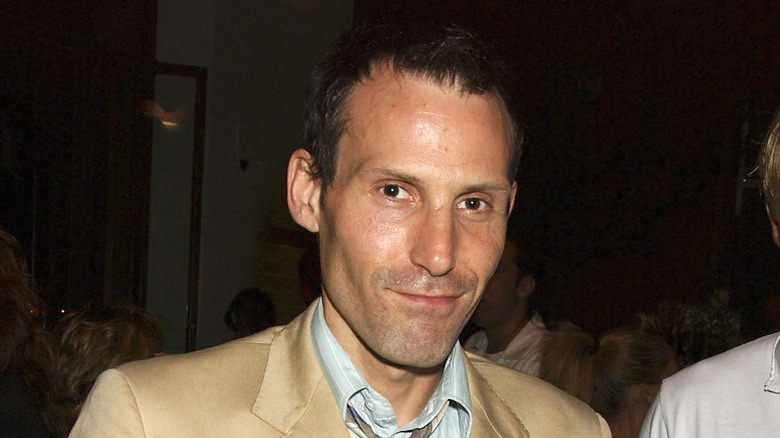 The first of Richards’ children, Marlon Leon Sundeep was unsurprisingly brought up in a rather unconventional lifestyle. According to the Daily Mail, the rocker’s first-born was raised on the road (via Alain Elkann Interviews) and became a Rolling Stones roadie at the age of six.

Described by Richards as acting “beyond his age” in his memoir, Marlon would reportedly wake the guitarist up for gigs and distract police if they knocked on the door of their hotel room. However, when Richards was busted for drugs with the Rolling Stones during their 1977 tour in Canada, Marlon was sent to live with his mother in New Jersey with her then 17-year-old boyfriend (via Daily Mail).

Anita Pallenberg would eventually decide to move back to the UK in 1988, but a teenage Marlon decided to stay in the U.S. alone. Richards had met Patti Hansen by this point, so Marlon was essentially abandoned. He didn’t mind, however, “because it was exhausting with Anita and Keith”.

While the relationship between father and son is a little unclear as they’ve kept it relatively private as they’ve grown older, Marlon did contribute to his dad’s 2010 memoir “Life.” Marlon also has three children of his own with model Lucie De La Falaise, and it’s known that Richards is a very hands-on grandfather (via the Times). “He’s bringing up his own kids in a very secure way, hands-on all the time, because he never got that,” the musician said.

Angela Richards didn't see much of her dad during her childhood 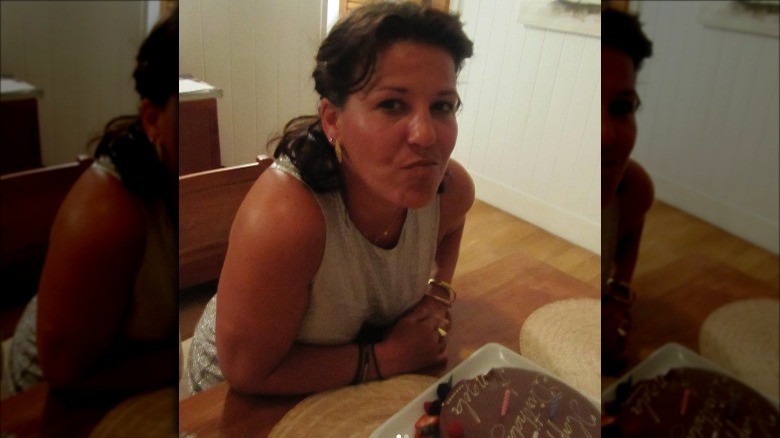 Born Dandelion Angela Richards, the musician’s second child with Pallenberg seems to have had a more fraught relationship with her father growing up. According to the Daily Mail, she was sent to live with her grandmother in Kent after Richards fell asleep at the wheel with a young Marlon in the car.

She lived with her grandmother for 20 years until she passed in 2007, when she and her husband then moved to a large estate owned by her father (via Heavy). With her father and late-mother living close by in separate estates (via the Daily Mail), Angela runs a horse riding school.

However, now and again she finds the time to support her dad on tour, with fan sites for the Rolling Stones spotting her backstage at concerts in England and the States. The father and daughter duo seem to meet up quite regularly whenever he’s in the U.K. according to the Daily Mail, and she has a very strong relationship with her younger siblings (via Instagram).

Keith was surprisingly strict with his youngest daughters, Theodora & Alexandra 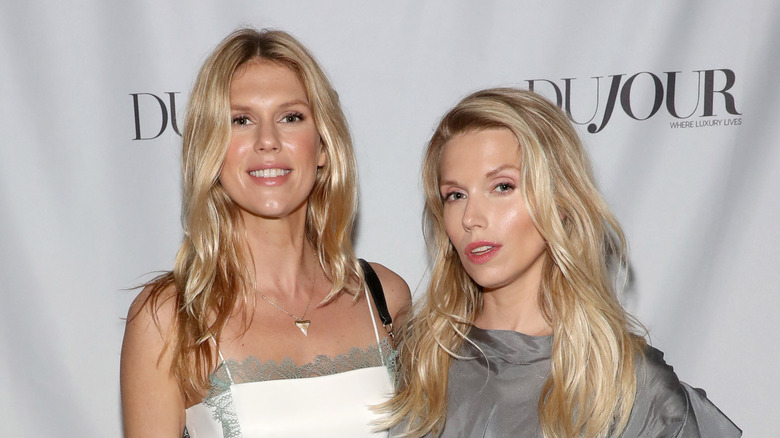 Theodora and Alexandra are the youngest of Richards’ kids, and the ones with the most normal upbringing, it seems. According to the Express, the Rolling Stones guitarist was a “stickler for good manners and proper behavior” with his youngest daughters. However, when Theodora was caught with marijuana on her while painting graffiti as a teen, Richards told her “not to draw on public buildings and give the weed to me, if it was any good” adding “who am I to call the kettle black?”

Both of Richards’ daughters are self-confessed daddy’s girls, with both routinely sharing their love for Richards on Instagram during birthdays, anniversaries, and Father’s Days. They also admitted to raiding his closet from time to time, and cite him as a huge inspiration for their fashion choices.

“He’s definitely influenced my style,” Theodora told DuJour. “I think I have a stage persona because of him, for sure. He gave me this freedom and love of clothing.” Alexandra agrees, adding, “Because he’s so comfortable in his style and what he wears, I think that’s a huge reflection on what I wear.”

Theodora illustrated to her father's 2014 children's book about his grandfather 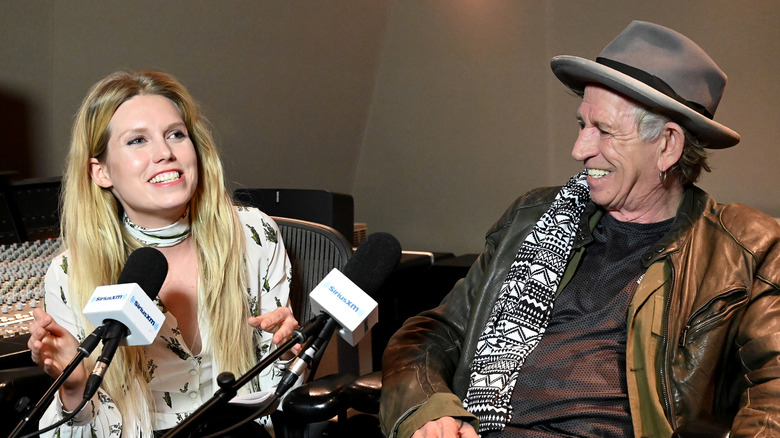 Theodora was also an integral part of Richards’ 2014 children’s book “Gus & Me: The Story of My Granddad and My First Guitar.” She illustrated the book with pen and ink collages inspired by pictures from her father’s childhood. “When I found out they wanted me to be a part of this project, my immediate instinct was to say yes,” she told the Guardian. “To be able to explore my father’s relationship with his grandfather was a gift in itself.”

The book also gave Richards’ daughter a chance to reflect on how he is as a grandparent. While he may not have watched a musical with Theodora and Alexandra when they were little, he happily watches the likes of “Frozen” with his grandchildren. “It just makes me smile because my dad has become the ultimate grandfather,” she explained to Harper’s Bazaar, “sitting there with a pipe –- although, it’s not a pipe, it’s a cigarette.”