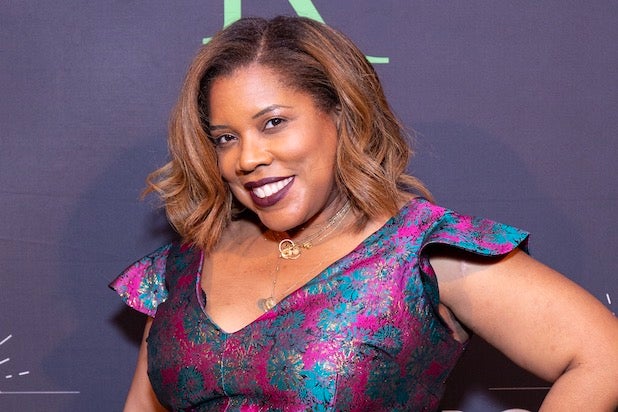 HuffPost named Danielle Belton, the current editor in chief of The Root, as its next top editor on Wednesday.

In a note to staff, BuzzFeed CEO Jonah Peretti said he and Mark Schoofs, the editor in chief of BuzzFeed News, officially offered Belton the job last week and had planned to formally announce her hire on Thursday, had it not been for a “leak” to the Daily Beast about Belton’s hiring. She is expected to begin her new role April 12.

“Our priorities were to find a leader who had a clear and formidable long-term version for HuffPost, and would champion its urgent, compelling, and far-reaching journalism,” Peretti wrote. “After an initial screening process involving myself and Mark Schoofs we tapped a diverse group of candidates to write memos on their visions for the future of HuffPost. The memos were then reviewed by a wide range of leaders from HuffPost and BuzzFeed, before final interviews with myself, Mark and some of those leaders. Ultimately, Mark and I considered all input, and were very excited to offer Danielle the job last week.”

Peretti also said he expressed to Belton a commitment to “immediately” increase the representation of Black and Latinx employees at HuffPost and that the company would pursue this effort on “Day 1” of Belton’s leadership.

“When life comes at you fast … but it’s the best news ever!!! It’s true, I’m leaving my wonderful friends and team @TheRoot next month to join another news site as its EIC!So honored and excited to be part the award-winning @HuffPost team!” Belton tweeted on Wednesday.

HuffPost has been without a top editor since last March, when Lydia Polgreen stepped down as editor in chief to join Gimlet Media. HuffPost was also acquired by BuzzFeed in a deal with Verizon Media that was finalized last month; as part of the acquisition, 47 jobs at HuffPost were cut.

During a meeting with staff at the time, BuzzFeed CEO Jonah Peretti said that HuffPost’s losses exceeded $20 million last year and the cuts were meant to “fast-track the path to profitability” for the newly acquired media outlet.

“Though BuzzFeed is a profitable company, we don’t have the resources to support another two years of losses,” Peretti said.

The layoffs were criticized by HuffPost’s union, where 33 members were affected by the cuts.

“We are devastated and infuriated, particularly after an exhausting year of covering a pandemic and working from home,” the union said in a statement shortly after the layoffs were announced. “This is also happening less than a month after HuffPost was acquired by BuzzFeed. We never got a fair shot to prove our worth.”

Read Peretti’s full note to staff about Belton’s hiring below.

Dear HuffPosters (and all of BuzzFeed),

I wanted to share some exciting news with you. To be totally transparent – we were going to announce this tomorrow, but are accelerating plans because we have a leak. I’m pleased to announce that Danielle Belton is the new Editor-in-Chief of HuffPost.

Danielle joins us from The Root, where she is currently its first-ever Editor-in-Chief. As EIC, and previously the site’s youngest managing editor, she helped dramatically expand the newsroom’s profile, traffic, and league of talented writers. Danielle began her journalism career at the Bakersfield Californian, a local newspaper in Southern California; later created and managed her own award-winning blog, The Black Snob, in 2007; and since then has written, edited and contributed to numerous publications including theGrio, Essence, The Washington Post and The New York Times — as well as programming across NPR, PBS, CNN, ABC, and BET.

To share a little bit more about the search process here: When I announced we were acquiring HuffPost in November, we began a robust and expansive search for an Editor-in-Chief to lead the newsroom and reinforce its standing as a top digital destination. Our priorities were to find a leader who had a clear and formidable long-term version for HuffPost, and would champion its urgent, compelling, and far-reaching journalism.

We received and reviewed many strong, qualified resumes spanning all of media, and sought out both internal and external candidates. After an initial screening process involving myself and Mark Schoofs we tapped a diverse group of candidates to write memos on their visions for the future of HuffPost. The memos were then reviewed by a wide range of leaders from HuffPost and BuzzFeed, before final interviews with myself, Mark and some of those leaders.
Ultimately, Mark and I considered all input, and were very excited to offer Danielle the job last week.
Danielle will report to Mark, who will be removed from the day-to-day of HuffPost newsroom, but remain an advocate for news overall on BuzzFeed’s executive team. Under Danielle, Richard Kim will serve as Executive Editor.
I want to express my gratitude to Richard Kim, and the rest of the leadership team, who masterfully steered the newsroom in this interim, as well as Whitney Snyder, Kate Palmer, Amanda Terkel, Tianna Rounds, and Jack Riley for helping see HuffPost through turbulent changes. And to the newsroom, thank you for your resiliency, passion, and determination to make HuffPost the best it can be every day.

I should also share that I expressed to Danielle a commitment to immediately increasing the representation of Black and Latinx employees in the HuffPost newsroom during our journey to profitability, and under her leadership we will pursue this from Day 1 to ensure we are representing and reaching the most diverse audience.
So thanks for joining me in giving the warmest welcome to Danielle, who is officially starting April 12 and will be based in NYC. In the meantime, she’ll be speaking to the HuffPost newsroom this coming Monday, March 29, and joining our upcoming Global All Hands on Thursday, April 1.