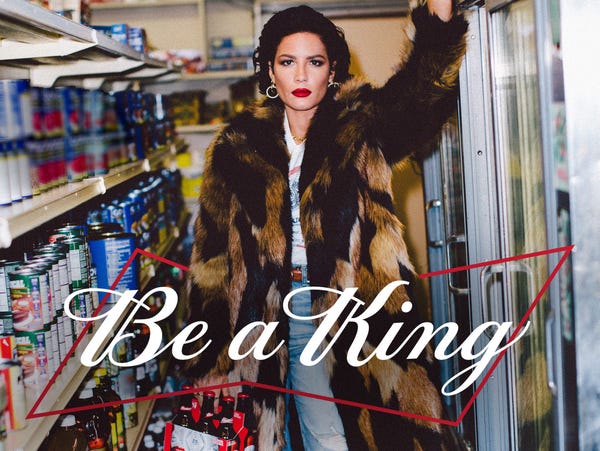 Halsey is a woman who famously wears many hats: singer, songwriter, chart-topper, poet, painter, actor, activist, and, now, the face of Budweiser's "Be a King" campaign.

The legendary beer brand tapped the 26-year-old "to inspire consumers to have the same self-belief to step up and pursue their dreams," according to a spokesperson.

She also teamed up with Budweiser to create a short film about her pre-pop star life. The visual follows her journey from a housing-challenged teen in New York City, writing and doodling as she rode the subway, to a worldwide sensation. The voiceover features some of Halsey's never-before-heard poetry.

Halsey spoke to Insider via email about what drew her to the campaign — and also offered some insight into her creative process, especially writing her newest album "Manic," which we previously named one of the best albums of the year.

What appealed to you about Budweiser's "Be a King" campaign?

How did it feel seeing your own coming-of-age story recreated in a mini-film?

How do you personally distinguish a poem from a set of lyrics? Do you ever take lines from your poems and use them in songs?

You've previously described yourself as more of a writer than a singer.

If you could go back to before you became Halsey and tell yourself that people would connect with your writing, that you could someday publish a book of poetry, would you still want to pursue a career in music?

Have you been writing more or less than usual while social distancing?

Do you have a specific lyric or set of lyrics on "Manic" that you're particularly proud of?

This interview has been lightly edited for clarity.