Why is The Hunger Games trending? 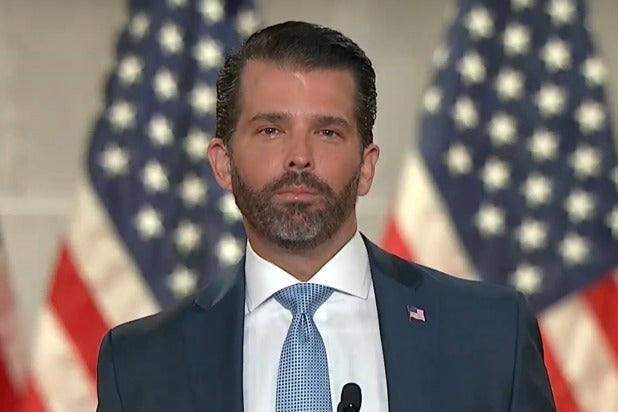 Fox News cut away from a rally in support of outgoing president Donald Trump Wednesday after his son, Donald Trump Jr., said “s—” during the broadcast and began railing against transgender women.

The younger Trump mockingly said “amen and a-women,” referencing a congressmember who recently ended a prayer that way.

He then went on a tear about trans women participating in women’s sports, saying, “no s—” they might have a physical advantage over their cisgender teammates and opponents.

Fox News cut away shortly after that, interrupting Trump Jr. mid-bellow. The network tossed back to anchor Sandra Smith, who offered the late-morning audience information about the rally taking place ahead of the congressional certification of the 2020 election.

She continued, “Ask Sen. Kelly Loeffler, who tried it and was voted out of office last night. GLAAD has tracked more than 180 attacks against LGBTQ people from the Trump administration and family over the last four years. There’s no evidence in the 18 states with policies that allow transgender students to participate that inclusion negatively impacts athletic programs. The American people have spoken — time for Donald Junior and others who use their platform to spread lies and hate to get off the stage.”

Loeffler, a Republican senator from Georgia, lost her bid for reelection Tuesday night, jeopardizing the GOP’s control of the Senate. In her brief stint in the Senate, Loeffler introduced a bill that would prevent transgender student athletes from competing on teams that match their gender identity and, per GLAAD’s landing page dedicated to Loeffler’s record, could require invasive genital screenings.

Related posts:
World News:
PIERS MORGAN on President Biden's wake-up call for America
Why is The Hunger Games trending?
Cold-case detectives fly drone over beach where mother fatally stabbed
Teens Indicted in Slaying of Woman, 20, at Halloween Party
Recent News:
This website uses cookies to improve your user experience and to provide you with advertisements that are relevant to your interests. By continuing to browse the site you are agreeing to our use of cookies.Ok