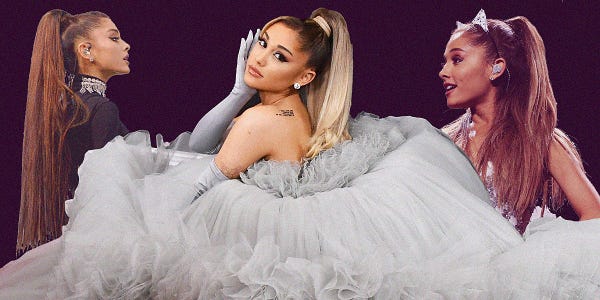 The record-breaking pop star has stayed largely quiet about her sixth studio album, the follow-up to 2019's wildly successful "Thank U, Next."

But while Grande herself has yet to make any official announcements, the hashtag #AG6iscoming has gained traction on Twitter as new details have emerged. Thanks to hints from close collaborators, many "Arianators" believe that new music is on the horizon.

Here's everything we know about AG6.

Back in February, Grande already had at least nine new song ideas

Less than two months after returning home from the "Sweetener" World Tour — and about one year after releasing her most recent album — Grande had already returned to the studio.

"i should not post this but f— it," she wrote on Twitter, sharing a screenshot of a playlist with the song titles blacked out.

"these are how many ideas i really really love (like enough to tell u that they exist) in a playlist of things i've made since i've been home. i love this s— i can't help it."

One of those songs is likely called "Nasty"

On March 24, Grande shared a short snippet of a new song.

"i miss making things," Grande wrote alongside the clip. "can't wait to get back to work."

The risqué lyrics possibly nod to Grande's new relationship with Dalton Gomez, whom she had recently begun dating.

"I just wanna make time for you/Swear it's just right for you/Like this p—- designed for you," she sings. "Bet I look nice on you/Open my mind for you."

The hook features the lyric: "Don't wanna wait on it, tonight I wanna get nasty."

Grande also promised fans it would not be "one of those snippets where we'll never hear the whole song" like one fan suggested on Twitter.

"but new music is still a long time away," she clarified. "jus wanted to share a lil something w u."

Another song might be a collaboration with Doja Cat

Grande confirmed in a May interview with Zane Lowe that she has an unreleased song with Doja Cat.

"I'm obsessed with her. I love her. I was able to work with her earlier this year on this song that I want to save for whenever it's time again to drop," Grande revealed.

Doja later teased their collaboration on Twitter, though it's unclear whether it will be included on Grande's forthcoming album or Doja's.

Grande shared another snippet of new vocals in September, a wink in October — and quietly endorsed fans' tweets about a new era

That same day, Grande wrote a tweet that appeared to tease new lyrics: "Know my love infinite nothing that I won't do."

Just a few weeks later, Grande posted a selfie and revealed that she's "turning in" some "mixes" — meaning that she has at least a few songs on the verge of completion.

She also liked a fan reaction on Twitter that reads "SHES COMING TO SAVE US," and another tweet with the hashtag #AG6isComing," though she later un-liked the latter.

Cowriter Tayla Parx told Insider that Grande has been working with "the 'Thank U, Next' crew"

"The 'Thank U, Next' crew did get back together over quarantine," Parx revealed during an interview back in September. "We just kind of let it happen naturally, same way as the last album."

Along with singer-songwriter Victoria Monét and producer Tommy Brown, Parx is one of Grande's closest collaborators: She co-wrote six songs on Grande's Grammy-nominated fifth album: "Needy," "NASA," "Make Up," "Ghostin," "7 Rings," and the iconic title track.

"I think she has to tell you more about [the album] herself, but I can tell you she's made, yet again, another evolution," Parx continued. "We're just going to get to know her even more this time around, which I'm really excited for the world to see."

"I'm excited for her to tell you guys just more about where her head was at with this project, because it truly is incredible, honestly, and I can't wait for the world to hear it," she added.

Up to something with the facilitator💪🏽&& yesss I’m wearing FUBU

Brown has worked with Grande on all of her albums since her debut, 2013's "Yours Truly."

On October 10, Brown reposted a photo from the fan account @throwbacksagb, which shares old posts from Grande and news that occurred "on this day."

Brown reposted a photo of himself with Grande that she shared two years ago, as the singer and producer were putting the finishing touches on "Thank U, Next."

"five albums n however many years of friendship later," Grande wrote at the time. Brown added: "6****"

Brown appears to suggest that Grande officially has six albums under her belt, which could mean she's almost ready to release her newest.

However, Grande may be hesitant to release new music while the pandemic is ongoing

Even though Grande has been feeling productive and "extra inspired" this year, especially since installing a studio in her Los Angeles home, she has acknowledged that 2020 isn't an ideal time to release new music.

"I think as far as creating goes, it feels really good," she told Lowe in May. "But also, I don't really feel comfortable putting anything out right now because … it's a really tricky time for all of that."

When Lowe asked if she's working on a new album, Grande said, "There's nothing to tell."