The actor famous for his portrayal of Eugene Felsnic in ‘Grease’ has been slammed online by Kara Lashbaugh after he criticized her on Facebook for failing to wear makeup.

AceShowbiz -“Grease” actor Eddie Deezen has been left concerned for his safety after becoming the target of cyberbullies for allegedly harassing a waitress at his local Maryland restaurant.

The star, famed for playing nerdy Eugene Felsnic in the 1978 movie musical, took to Facebook earlier this week (beginning June 21) to criticise the server in his Cumberland hometown, insisting he hates it when she fails to wear makeup, especially her fake eyelashes.

Deezen admitted he became a regular at the eatery just to look at the waitress and enjoy some “eye candy” with his meal, but whenever she turned up to work without looking all dolled up, he would walk out.

The employee in question, Kara Lashbaugh, felt uncomfortable with the post and took to Twitter to slam Deezen for his actions.

“Eddie Deezen is a f**king CREEP who comes into my work at least once a week, calls and asks other servers for my schedule, and if he comes in and i’m not wearing makeup HE LEAVES,” she vented. “And this grown a** old man has the balls to post this on facebook about me im losing my mind [sic].” 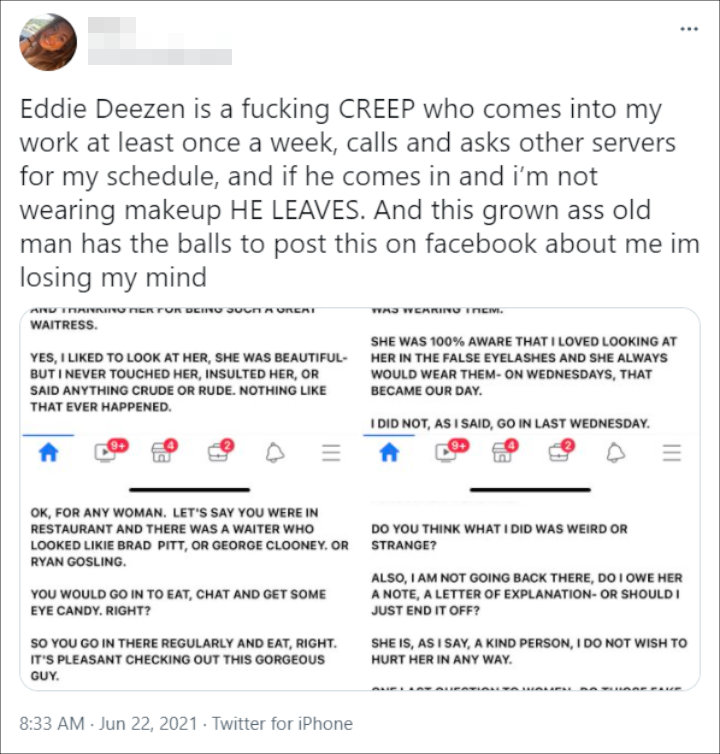 A waitress at a Maryland restaurant slammed Eddie Deezen for complaining about her not wearing makeup.

The tweet apparently prompted a number of Lashbaugh’s friends to put him on blast in private messages, and now Deezen has accused her of making a big fuss just because he’s “a fairly well-known person.”

The waitress, who has not filed a police report, is now planning to seek out an attorney to determine if there’s anything she can do about the situation, but Deezen argues he is the victim, and has become scared for his wellbeing, according to his lawyer, Adam Hirshfield.

He’s even reached out to police for help, but was advised to take the matter to court and file a restraining order if he’s seriously concerned, reports TMZ.