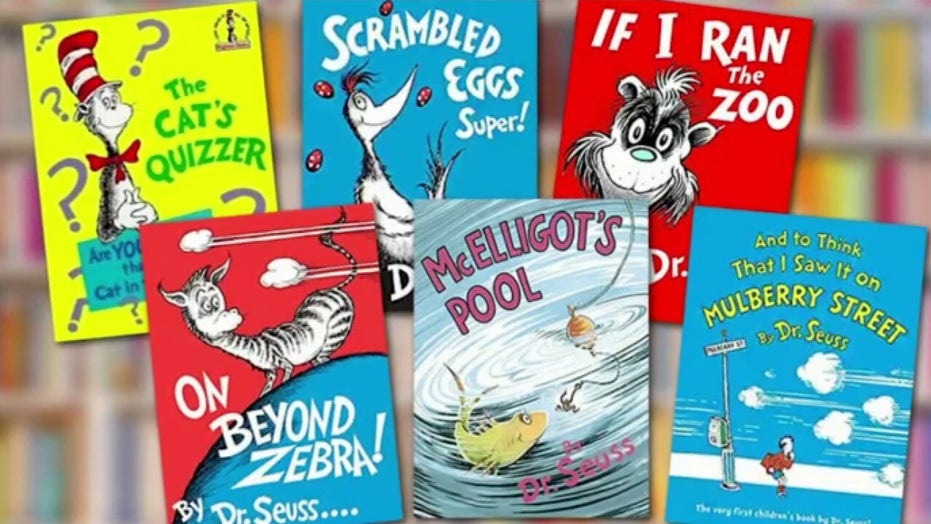 Dr. Seuss’s books seem more popular than ever amid the controversy over a small selection of titles that will no longer be sold because they were deemed to have “insensitive and racist imagery.”

Copies of the beloved children’s author’s most popular books were virtually flying out of Amazon and Barnes and Noble’s warehouses, with his most popular books making up 9 out of the top 10 bestsellers on both companies’ lists as of Thursday evening.

“The Cat in The Hat,” “Oh, The Places You’ll Go” and “Green Eggs and Ham,” three of Seuss’s best-known works, were all out of stock on Amazon but still available at a higher price on Barnes and Noble’s website as of Thursday evening.

Dr. Seuss Enterprises, which preserves the author’s legacy, announced this week six books – “And to Think That I Saw It on Mulberry Street,” “If I Ran the Zoo,” “McElligot’s Pool,” “On Beyond Zebra!,” “Scrambled Eggs Super!,” and “The Cat’s Quizzer” – would no longer be printed.

6 DR. SEUSS BOOKS TO STOP BEING PUBLISHED BECAUSE OF RACIST IMAGERY

“These books portray people in ways that are hurtful and wrong,” Dr. Seuss Enterprises told The Associated Press in a statement that coincided with the late author and illustrator’s March 2 birthday.

“Ceasing sales of these books is only part of our commitment and our broader plan to ensure Dr. Seuss Enterprises’ catalog represents and supports all communities and families,” it said.

Used copies of the now out-of-print books were being priced by independent sellers on Amazon for hundreds of dollars.

Online marketplace eBay Inc. said it is working to prevent the resale of the six out-of-print books, although hundreds of listings were still on the website as of Thursday. Many of the listings referenced the books being “banned.”

One listing was offering four of the books for $2,000.

DR. SEUSS BOOKS DEEMED OFFENSIVE WILL BE DELISTED FROM EBAY

Examples of the problematic drawings include an Asian person wearing a conical hat and holding chopsticks in “And to Think That I Saw It on Mulberry Street” and two bare-footed African men wearing what appear to be grass skirts with their hair tied above their heads in “If I Ran the Zoo.”

The National Education Association, which hosts the “Read Across America Day,” once partnered with Dr. Seuss Enterprises for the literary promotion event that lands on his birthday, but has recently become “independent of any one particular book, publisher, or character” because of the need to promote diverse books, according to its website.

The stepdaughter of Seuss, whose real name was Theodor Seuss Geisel, told the New York Post this week “There wasn’t a racist bone in that man’s body — he was so acutely aware of the world around him and cared so much.”

Lark Grey Dimond-Cates said she understood the decision by Dr. Seuss Enterprises and said people need to be  “very gentle and thoughtful and kind with each other” because of the “painful times” we live in.

President Biden stirred some Seuss-related controversy about conservatives when he didn’t utter the author’s name in his “Read Across America” proclamation – a break from his two immediate predecessors.

Seuss remains hugely popular, making an estimated $33 million before taxes in 2020, up from just $9.5 million five years ago, the company said. Forbes listed him No. 2 on its highest-paid dead celebrities of 2020, behind only the late pop star Michael Jackson.

Within hours of Tuesday’s announcement, Dr. Seuss books filled more than half of the top 20 slots on Amazon.com’s bestseller list. “Mulberry Street” and “If I Ran the Zoo” were on the list, along with “Oh, the Places You’ll Go!”, “Green Eggs and Ham” and others still being published.